Even before the IPCC released its report this week, widely discredited climate change skeptics unleashed a barrage of static designed to discredit the consensus science. Dr David Suzuki reports. 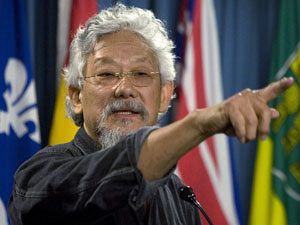 THE Intergovernmental Panel on Climate Change has just released its Fifth Assessment Report in three chapters and a summary. But not to be outdone, even before it was released, the contrarians unleashed a barrage of attacks designed to discredit the science. Expect more to come.

Many news outlets are complicit in efforts to undermine the scientific evidence. Contrarian opinion articles have run in publications in Canada and around the world, from the Financial Post and Washington Post to The Australian and the U.K.’s Mail on Sunday.

In the Guardian, scientists Dana Nuccitelli and John Abraham point out that attacks cover five stages of climate denial:

Read Singer’s report if you want. But it’s full of long-discredited claims, including that carbon dioxide emissions are good because they stimulate life. It’s not the goal of deniers and contrarians to contribute to our understanding of climate change; they want to promote fossil fuel companies and other industrial interests, a point explicitly stated in the Heartland-NIPCC news release.

It claims the Singer report, which isn’t peer-reviewed, provides governments with


...the scientific evidence they need to justify ending the expansion of ineffective alternative energy sources and other expensive and futile strategies to control climate. Then they can focus on supporting our most powerful energy sources – coal, oil, natural gas, nuclear, and hydro-power – in order to end the scourge of energy poverty that afflicts over one billion people across the world.

In other words, don’t worry about climate change, let alone health-damaging pollution or the fact that fossil fuels will become increasingly difficult to extract and eventually run out altogether. And even though mountains of solid evidence from around the world show climate change is and will continue to be most devastating for the world’s poorest people, the report feigns concern for those suffering from 'energy poverty'.

Overall, the attacks on legitimate climate science are coming from people whose arguments have been debunked many times and who often have ties to the fossil fuel industry. Some, including Roy Spencer and Ross McKitrick, have signed the Cornwall Declaration, which states:


We believe Earth and its ecosystems – created by God’s intelligent design and infinite power and sustained by His faithful providence – are robust, resilient, self-regulating, and self-correcting, admirably suited for human flourishing, and displaying His glory. Earth’s climate system is no exception.

and that renewable energy should not be used to replace fossil fuels.

Their world view can’t accept the reality of climate change or its solutions no matter how much evidence is provided — something that offends many people of faith who believe we have a responsibility to care for the Earth.

The IPCC report, on the other hand, is a review of all the available science on climate change, conducted by hundreds of experts from around the world. It confirms climate change is happening, burning fossil fuels is a major cause and it will get worse if we fail to act. It also examines what appears to be a slight slowing of global warming – but certainly not a halt, as deniers claim – and offers scientific explanations for it. Upcoming chapters will also propose solutions.

Resolving the problem of climate change will cost, but it will be much more expensive to follow the defeatist advice of industry shills, whose greed and lack of care for humanity will condemn our children and grandchildren to an uncertain future.