Climate change is controversial and much debated in the media — but did you know much of the debate is about straw man climate science, asks Michael J. I. Brown from Monash University. 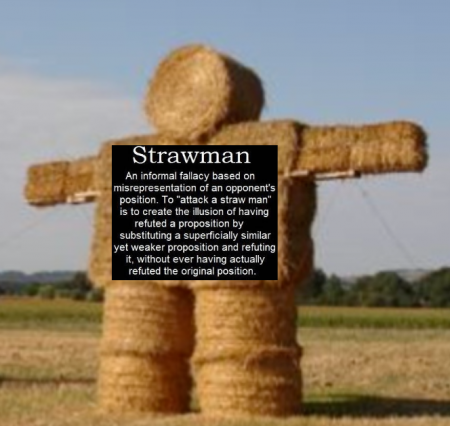 So let’s take a look at straw man climate science in action.

We have increased carbon dioxide (CO2) in the atmosphere by 40% since the 1800s. How does straw man climate science deal with this?


“And I can’t recall the number of times I have said, and it is uncontested, that human beings produce 3% of the carbon dioxide in the air.” ~ Alan Jones, 2GB, 19 October 2012

We produce a modest percentage of all CO2 emissions. But the extra emissions aren’t absorbed by the carbon cycle, so CO2 builds up in the air. A small rise each year has resulted in a 40% increase of CO2.

An error of omission on emissions.

Scientists have measured how CO2 blocks infrared light in the atmosphere, using satellites looking down and telescopes looking up. Climate models with and without anthropogenic CO2 emissions can be compared with observations.

What does straw man say?

Jones has delivered a one-two punch of non-sequiturs.

Are Jones' statements relevant to the lab results? Are they relevant to satellite and telescope measurements of the atmosphere? Do they have any relevance to CO2 and climate change? No, no and no.


Steady as she goes?

Earth’s climate is complex. It is influenced by the sun, volcanoes, CO2 and more. Consequently there are variations from year-to-year.

Now for the straw man:


“Last year was the sixth coldest since 1997, which shows the catastrophic scenarios of recent times are no longer looming over us.” ~ Imre Salusinszky, The Australian, 11 January 2012

Salusinszky is ignoring real world complexity. Scientists never predicted a perfectly steady rise in temperature. Years that are slightly cooler than our hottest decade are no surprise.

CO2 will produce a warmer climate, but CO2 won’t switch off variability. Suggesting otherwise is ignorant or deceptive.

Seas are rising, but complexity lurks. Changing rainfall patterns make sea levels temporarily dip when there is a switch from El Niño to La Niña.

What was The Australian’s headline?

Straw man climate science ignoring variability again. The dip’s cause and temporary nature were predictable. The fall stopped in March 2011, and was followed by a rapid rise.

The Australian’s headline doesn’t match the science. The headline only matches the introduction to Graham Lloyd’s article, and is at odds with the experts he interviewed. Straw man climate science is often practised by journalists, not scientists.


Storm in a tea cup?

Anyone who has been to Cairns and Melbourne knows climate varies from place to place.

Even at the same latitude, climate can be radically different.

Climate change varies from place to place too. Rainfall will rise in one place and drop in another. Around Australia temperatures and seas are rising at varying rates.

Let’s check in with the straw man:


“And, we’ve had a record Arctic melt. But better not mention the storm that NASA concedes broke the ice up and drove it south, or the record Antarctic ice gain.” ~ Maurice L. Newman, The Australian, 5 November 2012

Let’s look closer at Newman’s reporting on sea ice. The Arctic sea ice is clearly at record lows for months while the Antarctic sea ice is far closer to the average. Globally sea ice is declining. Errors of omission by Newman.

What about the storm? This is a red herring. The storm was in August but the Arctic sea ice was tracking record lows in July. Also, a dramatic low in Arctic sea ice cannot be produced by just one storm. Oops, more errors of omission.

“No consensus among climate scientists after all” ~ The Australian, 14 October 2010

Scientific consensus is often demanded for policy making. But it should not be confused with 100% agreement.

Vocal minorities will never accept the evidence. A handful of biologists don’t accept evolution. A handful of astronomers think there was no Big Bang. A handful of climate scientists say there is no such thing as anthropogenic climate change.

The overwhelming majority of climate scientists, peer reviewed papers and scientific organisations have concluded anthropogenic climate change is real. This is scientific consensus.

We don’t know exactly how climate will change, but we know it is changing and will continue to do so.

So what is straw man climate science?