Australia's treaty watchdog refused to endorse the treaty to sell uranium to Russia due to security issues. Dave Sweeney, the Australian Conservation Foundation's nuclear-free campaigner, calls for the treaty to be reviewed in the aftermath of the MH17 tragedy.

IT IS appropriate that Australia takes strong action to send a clear message to Moscow in the aftermath of the MH17 tragedy.  Not welcoming Russian president Vladimir Putin to the G20 summit in November would be one step.

Immediately halting Australian uranium sales would be another.

Uranium is a dual use fuel. It provides the power fuel for nuclear reactors and the bomb fuel for nuclear weapons — and the distinction between the two sectors is more one of political convenience than practical effect.

Russia's arsenal of more than 14,000 nuclear weapons has an explosive yield equivalent to 200,000 Hiroshima bombs.  President Putin has stated that any reduction in these numbers would only serve make its nuclear arsenal

Putin has declared that a nuclear arsenal

“remains one of the top priorities of Russian Federation policy”

and that Russia will develop

In 2007 and again in 2008, Russia threatened Poland with nuclear strikes from missiles it would base at its enclave of Kaliningrad following Polish approval for U.S. missile defence bases in Poland. 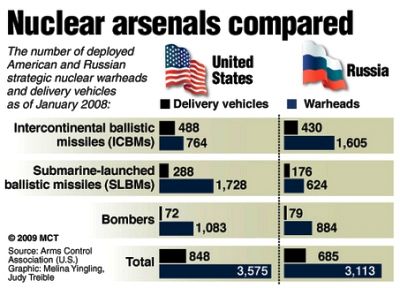 Today, as clashes continue along the Ukrainian border, we can be sure Moscow’s missiles are on high alert.

Events in the coastal city of Kaliningrad, home to one of Russia’s biggest anti-nuclear campaigns, provide a stark example of Putin-style politics. From 2007 to 2013, the community in Kaliningrad campaigned successfully to halt construction of a planned nuclear power plant. The campaign – like many around the world – gained extra momentum against the backdrop of the Fukushima nuclear crisis. Now one of the leading environmental voices in this campaign is under intense pressure from the Russian authorities.

The Ecoprotection! NGO was founded in 1989 in Kaliningrad and has become a leading player in Russia’s fledgling civil society movement through a combination of media savvy, grass roots community engagement and sophisticated tracking of companies and individuals that fund risky projects.

The group has a strong nuclear-free agenda, highlighting extensive deficiencies in Russian nuclear safety and successfully opposing plans for the construction of new nuclear power reactors and the importation of radioactive waste.

But the group’s effectiveness has offended some powerful forces.  Ecoprotection! – along with a human rights group and constitutional rights legal body – was recently listed on the Russian government’s formal register of ‘foreign agents’.

Such a listing is based on the premise that the group’s activities are hostile to the national interest and creates serious financial, political and operational barriers to its work. It will restrict the group’s ability to raise funds, attract new members and campaign publicly.

EcoProtection! rejects the claims against it, pointing to its proven commitment to community engagement, non-violence and transparency — attributes that seem to have little currency in Putin’s Russia.

Australia’s connection with the Russian nuclear industry escalated in 2007 when Prime Minister John Howard and President Putin inked a uranium supply agreement at the APEC summit in Sydney. 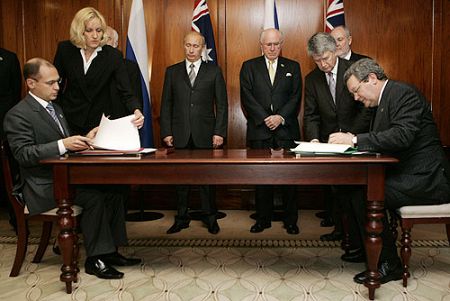 The deal was widely criticised by environment, proliferation and human rights groups, delayed by the political fallout from Russia’s 2008 invasion of Georgia and subject to detailed assessment from the Joint Standing Committee on Treaties (JSCOT), the Federal Parliament’s watchdog of Australian treaty deals and international agreements. JSCOT heard evidence highlighting concerns and deficiencies within the Russian nuclear industry, including an International Atomic Energy Agency (IAEA) estimate that only half of Russia's nuclear materials have been reasonably secured.

The nuclear sector has long been a source of concern and contamination in Russia with a domestic nuclear industry plagued with corruption, limited regulation and disturbingly porous security and a continuing flirtation with nuclear weapons.

Ukraine itself is no stranger to nuclear threat. On 26 April 1986, the meltdown and fire at the Chernobyl nuclear complex in Ukraine spewed radioactive waste across large parts of the then Soviet Union and well beyond. The accident caused massive economic, environmental and human damage and dislocation and the radioactive reverberations continue today.

JSCOT, to its considerable credit, recommended a mix of caution and action in relation to Australian uranium sales to Russia. It called for any sales to be linked to Russian compliance with a set of essential pre-conditions including a detailed analysis of Russia’s nuclear non-proliferation status; the complete separation of Russia’s civil and military nuclear sectors; reductions in industry secrecy; independent safety and security assessments of Russian nuclear facilities; and action on nuclear theft and smuggling concerns.

None of these have been realised and as the crackdown on EcoProtection! shows, the Russian nuclear sector is becoming even less transparent. JSCOT urged that

“the supply of uranium to Russia should be contingent upon such inspections being carried out.”

It appears most Australians agree with JSCOT’s cautionary approach. A 2008 survey found 62 per cent of Australians opposed uranium exports to nuclear weapons states compared to 31 per cent in favour. An IAEA survey of 1,000 Australians in 2005 found 56 per cent believed the IAEA safeguards system was ineffective — nearly double the 29 per cent who considered it effective.

Despite these concerns successive Australian governments have furthered the fiction that the Russian nuclear sector is secure and safe and that nuclear safeguards – meant to stop the cross pollination of the military and civil nuclear sectors – actually work. Sadly, international inspections and scrutiny are limited or absent and perceived commercial interests have been given precedence over proven safety and security concerns.

In late December 2010 the first shipment of Australian uranium, sourced from Energy Resources of Australia’s embattled Ranger mine in Kakadu — itself the site of a severe contamination event last December — arrived in Russia.

Putting the promises of an under-performing resource sector ahead of evidence-based assessment has seen Australia squander a real chance to advance nuclear non-proliferation. However the tragic reality of Russian instability seen in the downing of MH 17, the continuing concerns over the safety of the Russian nuclear sector and the growing suppression of critics and public interest watchdogs has refocused attention and the need for clear action.

President Putin’s civil atomic aspirations exceed the capacity of Russia’s nuclear sector while his military ones have no place on a habitable planet. Neither should be fuelled by Australian uranium.

Dave Sweeney is the Australian Conservation Foundation’s nuclear free campaigner. You can follow Dave on @NukeDaveSweeney.