Want to a free trip around Australia, all expenses paid? It’s easy, just publish a book denying climate change (scientific credentials not required) then contact the Institute of Public Affairs — they’ll take care everything. Graham Readfearn from DeSmogBlog.com reports on the IPA — Australia’s home of anti-science. 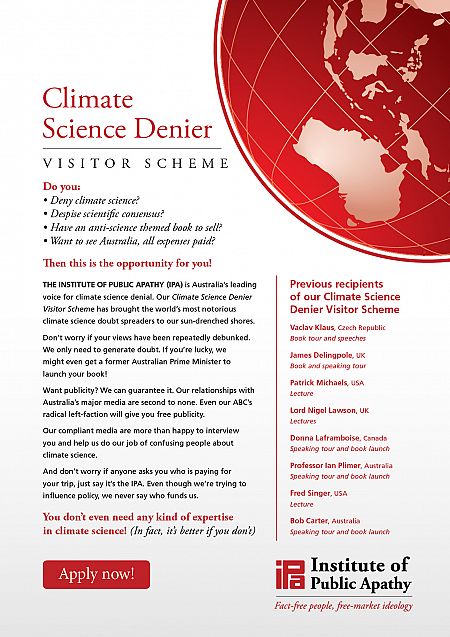 CANADIAN blogger and climate science sceptic Donna Laframboise has flown off for a tour of Australia to tell anyone willing to listen that the world's foremost body on climate change, the United Nations' Intergovernmental Panel on Climate Change, is something resembling a shambling mess.

Laframboise's trip has been organised by free market think tank the Institute of Public Affairs, which has a long history of promoting doubt about the science of human-caused climate change and the risks of the unmitigated burning of fossil fuels.

The blogger, who describes herself as an investigative journalist, gets to visit Sydney, Melbourne, Brisbane and Perth to promote her book "The Delinquent Teenager Who Was Mistaken For The World's Top Climate Expert - IPCC Expose."

The IPA describe's Laframboise as a "world renowned author" which is stretching credibility to breaking point. This "world renowned author" has written just two books. Her first was about feminism published in 1996. The Delinquent Teenager is her second, and is currently ranked #17952 in the book seller Amazon's Kindle store [#41,202 in the U.S. Amazon Kindle Store.]

Essentially the book makes three central claims. The first is that the IPCC has engaged several young scientists which Laframboise says goes against the IPCC's claims that they use the world's top scientists. A second is that some of the scientists working on some of the reports have links to environmental groups which are not always made clear. A third is that the IPCC reports use too much non-peer reviewed literature.

All of these arguments are used as a proxy to question the science. Yet the IPCC's main climate change reports (the latest being the 2007 Assessment Report 4, the next being AR5 currently being worked on by more than 800 authors and expected sometime in late 2013 or early 2014) don't actually do any science.

They are reviews – albeit almighty ones – of research being conducted at institutions around the world and of scientific papers published in journals.  This means that even if the IPCC was found to be run by a small group of mentally-challenged llamas, this wouldn't affect the science on human-caused climate change. In essence, Laframboise's book is one giant strawman argument.

Laframboise claims that "experts" with alternative views on climate change have been left out of the IPCC process. She cites Nils-Axel Morner as evidence of this, a former president of the Commission on Sea Level Change, which was once a project of the International Union of Quartenary Research, an organisation consisting of scientists from across the world studying the climate going back two million years. Needless to say, Morner claims there's no link between climate change and sea levels.

What does INQUA make of Morner's position? In 2004, the union's then president John Clague wrote a letter to the Russian Academy of Sciences which had hosted an event where Morner had given a presentation. Mr Clague wrote that Morner had "misrepresented his position with INQUA", as the commission which Axel-Morner had been president of had terminated the previous year.


Dr. Mörner currently has no formal position in INQUA, and I am distressed that he continues to represent himself in his former capacity. Further, INQUA, which is an umbrella organization for hundreds of researchers knowledgeable about past climate, does not subscribe to Mörner’s position on climate change. Nearly all of these researchers agree that humans are modifying Earth’s climate, a position diametrically opposed to Dr. Mörner’s point of view.

As reported on the Deltoid blog, INQUA repeated this assertion when I contacted them about a story in 2009. A statement then from the president of INQUA added:


Dr Morner’s views concerning sea-level change are his own and are not endorsed by the current Executive Committee of INQUA, nor have previous INQUA Executive Committees endorsed Dr Morner’s views. On several occasions INQUA has requested of Dr Morner that he not inadvertently represent his views on sea-level change as if they have some connection with INQUA.

Event after these two incidents, Morner has continued to misrepresent the view of INQUA. Last year, he wrote for The Spectator that the organisation's research was an "inconvenient truth" for the climate lobby, while the organisation itself says human caused climate change is real and that "Every year, many millions of people will be forced from their land and homes due to sea-level rise".

Laframboise doesn't mention any of this in her book. Nor does she mention that Dr Morner believes you can find water underground by using a stick. That's right, he's a water diviner.

When Fox News based an IPCC "expose" on Laframboise's book, Media Matters found that when it came to issues on the qualifications of the handful of young scientists, key facts had been missed or omitted.

In a televised interview with Australian climate science sceptic columnist Andrew Bolt, Laframboise speculates that some IPCC authors were chosen because they agreed with the orthodoxy, rather than because they might be good at their jobs.


People were chosen because they could be easily led… perhaps because they had already expressed the kind of opinion the IPCC brass was hoping the report would express. It's not clear but it certainly looks fishy.

Yet if this really was the conspiracy to keep out dissenting voices which Laframboise hints at, then how does she explain the presence of well-known climate science sceptics such as William Kininmonth, Ross McKitrick and Stephen McIntyre who were all given roles as "expert reviewers" in the last IPCC report?

Laframboise's book also hints at a conspiracy because she found some authors of IPCC reports have affiliations or histories with environment groups. In one case, Laframboise accuses the IPCC of committing a "sin of omission" by neglecting to point out that William Hare, a visiting scientist at the Potsdam Institute, has strong ties to Greenpeace.

Why did Laframboise go looking for scientists with links to environment groups while ignoring, for example, the presence of a "Haroon Kheshgi" from the "ExxonMobil Research and Engineering Company", or that oil company's many other contributions to IPCC reports?

No mention either in her book of Ross McKitrick's position as senior fellow of free market think-tank The Fraser Institute, or William Kininmonth's roles as an advisor for several climate sceptic groups. She describes Steve McIntyre as a "Canadian with a Masters degree in mathematics and a flair for statistics" but doesn't mention his 30-year career in the mining industry.  Would all of these examples qualify for a Laframboise "sin of omission", perhaps?

In the book, Laframboise writes that she sent draft copies to some "wonderful people" for comments. Sceptics Ross McKitrick, the IPA's science fellow Professor Bob Carter and recent IPA invitee James Delingpole were among her list of reviewers.

In a post on Jones' Understanding Climate Risk blog, he pulls apart Laframboise's claims as being invalid, although he's not quite that polite:


Apparently the selection of a few lead authors who are not hoary old farts who have gone emeritus, disqualifies the IPCC from saying anything useful…. all the young authors that Laframboise picked on have made sustained and substantial contributions since their first efforts on the IPCC.

The epic fail in Laframboise’ case is that there is no credible alternative scholarship that exists to counter the sustained and substantive findings of the IPCC. If the IPCC has failings, it is in framing the science-policy relationship (which is also improving substantially), but there are no alternative facts to the science that the IPCC assesses and summarises in their conclusions.

Jones then puts his mind to the involvement of the IPA, an organisation which does not reveal its funders (but which is engaged in a project with the world's richest woman, mining magnate Gina Rinehart).

Jones publishes an excerpt of a letter sent by the think tank's executive director John Roskam, which states that the IPCC  had produced "corrupt science". Roskam is also on the editorial board of Connor Court, which is adding Laframboise's effort to a string of climate science contrarian books it has already published.

All this appears to have been the final straw for Jones.


The IPA is anti-science and consequently a risk to society. That is quite clear. They need to be opposed at every turn.

Laframboise is just the latest in a long string of climate change science contrarians which the IPA has supported by organising book and speaking tours and visiting lectures. Their record goes back to at least 1991, when the Melbourne-based think tank hosted US-based sceptic Fred Singer.

The IPA consistently seeks out and supports climate science denial wherever it might exist on the planet. Genuine working climate scientists are just not their thing.

You could almost imagine such think tanks might have an actual organised program to bring climate sceptics to Australia - perhaps a Climate Science Denier Visitor Scheme?

(This story was originally published in DeSmogBlog.com and has been republished with permission. For more by Graham Readfearn, visit www.readfearn.com or follow Graham on Twitter @readfearn.) 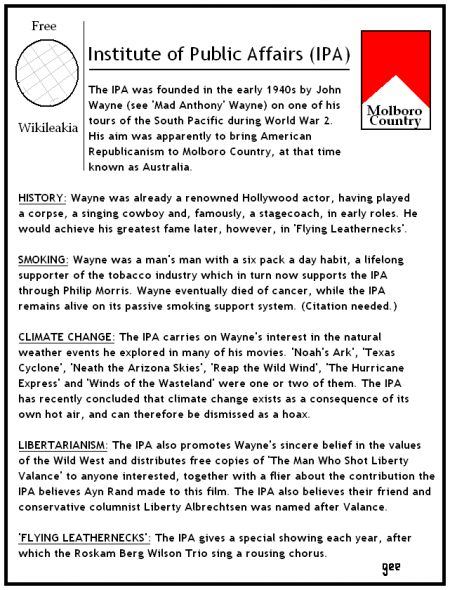