AUSTRALIAN SCIENTISTS have solved one piece of the climate puzzle. They have confirmed the long-debated fertilization effect.

Plants build their tissues by using photosynthesis to take carbon from the air around them. So more carbon dioxide should mean more vigorous plant growth — though until now this has been very difficult to prove.

Dr Randall Donohue of the CSIRO in Canberra and his colleagues developed a mathematical model to predict the extent of this carbon dioxide fertilization effect.

Between 1982 and 2010, carbon dioxide levels in the atmosphere increased by 14 per cent. So, their model suggested, foliage worldwide should have increased by between 5 and 10 per cent. 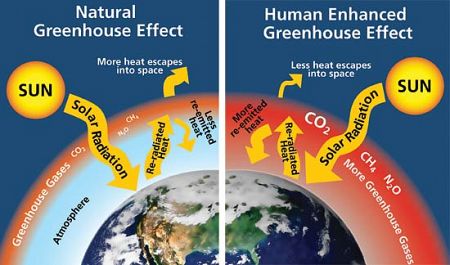 It is one thing to predict an effect, quite another to prove it. Satellite observations can and successfully do measure seasonal changes in vegetation, the growth of deserts, the change from open prairie to savannah, the growth of new trees in the tundra and so on, but it’s very difficult to be sure that these changes have anything to do with carbon dioxide fertilization. Changes in temperature and rainfall patterns would also have an impact.

Also, some regions – tropical rainforests, for example – are already completely covered by forest canopy. Orbiting satellites are unlikely to measure much change there.

Donohue and his team, in a study appearing in Geophysical Research Letters, the journal of the American Geophysical Union, looked at those regions where leaf cover really would stand out, and where carbon dioxide fertilization would be the best explanation for new growth.

These were the warm, dry places. While the researchers focused on changes in arid regions in North America’s south-west, Australia’s Outback, the Middle East and parts of Africa, they also had to find a technique that allowed for natural seasonal and cyclic changes, alterations in land use and so on.

They calculated that in these conditions, plants would make more leaves if they had the water to do so. According to Donohue:

That is the CO2 fertilization effect.

The team averaged the greenness of each location over three year periods, and then grouped the greenness data from different locations according to known records of rainfall. They also looked at variations in foliage over a 20 year period. In the end, they teased out the carbon dioxide fertilization effect from all other influences and calculated that this could account for an 11 per cent increase in global foliage since 1982.

This is what’s called negative feedback with at least some of the increasing levels of carbon dioxide being absorbed by extra plant growth. It could also be good news for biodiversity, and good news for food security. Plants are the primary producers that feed all animals.

Trees are likely to invade grasslands in the drier regions, and their deep roots are better equipped to tap groundwater and at the same time stabilise the soils. As Dr Donohue summed up:


“Even if nothing else in the climate changes as global CO2 levels rise, we will still see significant environmental changes because of the CO2 fertilization effect.”