Is what’s good for Clive good for Australia?

In an open letter to Clive Palmer, climate leader Nigel George poses some questions and offers some suggestions for the man who wrecked Tony Abbott's carbon price repeal moment yesterday.

It would appear we have two things in common.

One, we both got to meet Al Gore last week.

Ok, so my meeting did not make the national news, but I was one of the 500 odd people in Melbourne receiving our Climate Leadership training from Mr Gore. I am hoping Mr Gore’s deep, abiding passion and a vision for humanity that rises above petty politics, denial and greed had as great an impact on you as it did me.

The other thing we have in common is that we are businessmen.

I congratulate you on your success and hope to one day be in a position like yourself and to have gained sufficient wealth to make a difference. Although I will pass on the mines. And the dinosaurs.

I would just like you to know that there are a great deal of us regular Aussies that are willing to give you a go. Mainly because with you up there, we know who we are dealing with, we know what you are about.  Well, most of the time anyway.

It is probably a bit sad to note that Australian politics has degenerated to a point that we are all willing to accept a special interest group of one person, but it is certainly better that the puppet show that is the two big parties.

Heck, I personally believe that it would do a lot for honesty in Australian politics if Rupert just got rid of the muppet, declared himself Emperor, lined the front bench with his mates from the IPA and declared Andrew Bolt as Speaker for the House, the Universe and Everything.

But me and many other Australians do have one burning question:

Is what is good for Clive also good for Australia?

Saving a RET that was working and the CEFC which is making money from the ravages of political ideology was a really good start. Great for Clive, but also great for Australia. Keep it up mate. Kudos.

I do have three things that I would like you to consider in light of other things that are great for Clive and great for Australia.

One, next time you feel that little twinge that the deniers might be right, can you jump on your plane and go to one of the Pacific islands. Preferable one of the low ones. See they think our ‘debate’ is a bit of a joke. It is really hard to get a serious conversation around how great coal is when the high tide is in your lounge room.

Or better still, go see my new mate Rodne Galicha in the Philippines. He said that we should encourage all potential deniers to come to the Philippines and walk in his shoes for a while. Ask him about Typhoon Haiyan. You see Clive, if a storm like Haiyan rides a really warm ocean into Queensland – which does happen on El Niño years – it will deposit you and the Palmersaurus’ in the middle of Kakadu faster than you can say “where did I leave the keys to the Rolls?”

Second, it would be good for Clive and Australia if you didn’t swallow that bunkum on Australia leading the world on an ETS. Actually we are way behind. Europe has had one since 2005. China has a few going in different provinces. Even the Kiwis have one. The only reason the U.S. doesn’t have one is that their political system is more broken than ours.

Mate, we are far better off just having a floating price ETS. It is only worth a couple of bucks at the moment and when the world gets over the smoke (no pun intended) and mirrors routine of the fossil fuel industry and starts moving to a clean energy future, we won’t be left with our pants around our ankles.

Thirdly and lastly — I ask you reconsider the big boat idea. We already had a second Titanic, it was called the Britannic. It sunk too. You might think it is a great idea, but honestly mate it kinda makes you look like a bit of a tosser.

Not good for Clive.

Spend the money on a Concentrating Solar Thermal plant. With molten salt storage, they are capable of delivering power all day long. And once they are built, the energy source is free — well for at least the next few billion years. Spain already has heaps of them.

That is the legacy you should leave mate. If you start rolling out CST plants we will love you for generations. If you do take me up on the idea, I will personally make sure we have you bronzed and mounted on a big plinth somewhere prominent — maybe even in front of Campbell Newman’s office.

Like many other Aussies, I would genuinely like you to answer my question. I have made a few suggestions, there are certainly many more things we could do together.

So, at the risk of repeating myself: is what’s good for Clive, good for Australia?

If the answer turns out to be yes – what’s good for Clive is good for Australia – you can rest assured that we've got your back mate.

PS I hear that you are not all that fussed with the current crop of advisors. I’d be happy to be your advisor mate. I am a straight shooter, have paid my dues on the shop floor and in the boardroom, I know how to build sustainable businesses, and I know this climate change thing inside out. Call me. Any time before 7pm.

PPS Mate’s rates of course — any friend of Al’s is a friend of mine. 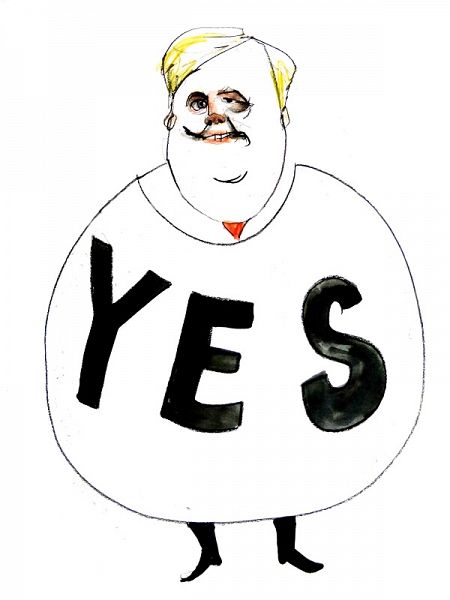 Is what’s good for Clive good for Australia?