Conspiratorial thinking on climate denialist blogs surged in response to the stolen climategate emails in 2009. Over the years, a number of conspiracy theories have also sprung up about Skeptical Science. SkSc's John Cook investigates the link between science denial and conspiratorial thinking.

THERE IS a growing body of research linking climate science denial and conspiratorial thinking. While Stephan Lewandowsky's Moon Landing paper has attracted most of the attention, another important paper from Yale University has flown somewhat under the radar.

This research found that when those who deny climate change are asked to name the first thing that came to mind regarding climate change, the most common type of response involved conspiracy theories. 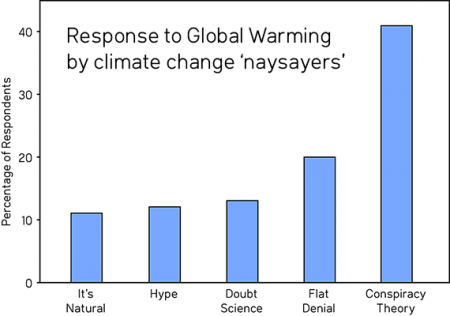 Conspiratorial thinking on denialist blogs surged in response to the stolen climategate emails in 2009 and has actually increased in subsequent years (despite the fact that mainstream attention in the stolen emails has waned). Over the years, a number of conspiracy theories have also sprung up about Skeptical Science. One excitable conspiracy theory endorsed by a Watts Up With That moderator argues that:

"...a well known billionaire is funding the pseudo science blog sceptical science. That billionaire is a multiple convicted felon who worked willingly for the Nazis in WWII. How is that not headline news?"

I often quote this comment in public talks as evidence of the powerful potential of volunteers and social media:

"I worked out recently it's impossible for one man to turn out a constantly updating and slick as grease website 'in his spare time'. I even went as far as to surmise he may just be a front for the IPCC or Globe International as it would need a team of professionals to create such a site and probably a few PR experts at the head."

When Lewandowsky published his Moon Landing paper, the conspiracy theorizing exploded, which is comprehensively (and entertainingly) documented in the recently published paper Recurrent Fury. The scope of the conspiracies grew to the point where they began to include Skeptical Science. For example, lumping together Skeptical Science and UWA, Anthony Watts claimed:

"That’s quite a little activist organization they have running out of the University of [W]estern Australia. I wonder if UWA officials realize the extent that UWA has become a base for this global climate activism operation and if they condone it?"

This conspiracy theory was endorsed by Judith Curry:

"SkepticalScience seems to becoming the ringleader for conspiratorial activities by the green climate bloggers."

Conspiracies about the 97 per cent consensus

Since our study finding a 97 per cent consensus among climate papers was published, there have been many conspiratorial accusations levelled at our research. Our favourite conspiracy theory by far is Christopher Monckton's suggestion that we created the journal Environmental Research Letters (this happens at the 2:40 mark). Incidentally, the journal began in 2006, one year before I started Skeptical Science. Apparently, I think long-term.

The latest conspiratorial accusation levelled against Skeptical Science comes from Lubos Motl, who accuses me of identity theft. I recently posted my response on Facebook:

A number of peer-reviewed studies have observed a link between climate science denial and conspiratorial thinking. The most prominent examples are the conspiracy theories extrapolated from quote-mined excerpts of stolen private correspondance of climate scientists, in the episode known as climategate. A similar conspiratorial episode spun from quote-mined stolen private correspondence was published by Lubos Motl this week, and has been uncritically propagated by other online commenters.

The stolen private correspondence from 2011 involved Skeptical Science team members developing comment threads (both supporting and rejecting climatescience) for use in a psychology experiment. In the private forum (only), I posted a few comments under the pseudonym Lubos_Motl (to signify that the comments were taking a contrarian stance). The username was changed to an anonymous name for the experiment. In other words, it was not used in the experiment and was never used outside of the private Skeptical Science forum.

Consequently, Motl's accusations of identity theft are demonstrably false. Further, I find it extraordinary that Motl publicly posts comments about me being hanged, and allows public comments on his blog that approve of torturing and murdering me. I find it equally extraordinary that such misleading and venomous posts are uncritically endorsed by third parties such as Richard Tol, Anthony Watts and Roger Pielke Jr.

Motl takes private correspondence and spins it into an elaborate scheme of identity theft, with accusations of nefarious intent and criminal activity. To demonstrate the ease with which conspiracy theories propagate throughout denialist blogs, Motl's conspiratorial accusations were uncritically endorsed by Anthony Watts, Richard Tol and Roger Pielke Jr.

The conspiratorial nature of climate science deniers has practical, societal consequences that we explore in week 6 of our online course, Making Sense of ClimateScience Denial. A number of studies have found that presenting scientific evidence to people whose worldview is threatened by that evidence can actually backfire. This is known as the Worldview Backfire Effect (as I explain in the lecture coincidentally titled Worldview Backfire Effect). Active distrust in science, or conspiratorial thinking, is one of the drivers of this backfire effect.

The practical consequence of this research is that it is more effective to concentrate climate communication efforts on the large, undecided majority who are open to scientific evidence. It is ineffective, or even counter-effective, trying to present evidence to those who deny climate science. I explore this further in the week 6 video Inoculation Theory, which explores scientific research in how to reduce the influence of misinformation by exposing people to weak forms of misinformation:

To make sense of the conspiracy theories promoted by climate science deniers, it's important to understand the scientific research investigating the link between science denial and conspiratorial thinking. This research should inform how we approach engagement with those who deny the scientific consensus on human-caused global warming.

This article was originally published on Skeptical Science on 27 July 2015 and is republished with permission.

@firstdogonmoon @australian But, on the bright side, no climate change denial or wind farm conspiracies either.

31 July 2015, 8:15am Conspiratorial thinking on climate denialist blogs surged in response to the stolen ...
Join the conversation
comments powered by Disqus
News updates