Curiousity from NASA offered the chance of Fukushima for everyone 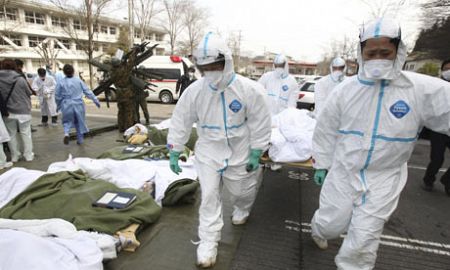 The National Aeronautics and Space Administration (NASA) intends in coming days to launch a rover to be deployed on Mars fueled with 10.6 pounds of plutonium. If there is an explosion on launch in Florida and plutonium is released, an area as far as 62 miles from the launch pad could be impacted, NASA acknowledges. If the rocket lofting the rover falls back to Earth instead of breaking away from Earth's gravitational field to keep going into space, re-entry into the atmosphere would cause both the rocket and rover to disintegrate, potentially releasing plutonium over a huge area.

An example of a space device meant to go to Mars but likely to fall back to Earth is unfolding now. A Russian space probe, named Phobos-Grunt, launched on November 9, reached low Earth orbit, but then an engine system failed to fire to power it on to Phobos, one of two moons of Mars. The Russian space agency is trying to get the craft's onboard computer, which it believes is the source of the problem, to function properly. But prospects are dim. Reuters in an article on the situation quotes Russian space expert Vladimir Uvarov: "In my opinion Phobos-Grunt is lost." Unless a fix is made, the probe will come crashing back to Earth, probably in January.

There is concern about the 12 tons of chemical fuel onboard the Phobos-Grunt impacting the Earth. If the Mars rover, which NASA calls Curiosity, falls back to Earth with its 10.6 pounds of plutonium, it would present a far, far more serious danger.

NASA intends to launch the plutonium-powered rover on what it has named its Mars Science Laboratory mission during a window from November 25 to December 15.

In its final environmental impact statement (EIS) for the mission, NASA addresses the possibility of an accident similar to what the Phobos-Grunt is facing in what NASA designates as "Phase 4" of the launch. Plutonium could be released in such an accident, "affecting Earth surfaces" along a wide belt around the middle of the Earth.

NASA's language for this: "Phase 4 (Orbital/Escape): Accidents which occur after attaining parking orbit could result in orbital decay reentries from minutes to years after the accident affecting Earth surfaces between approximately 28-degrees north latitude and 28-degrees south latitude." NASA gives odds of 1-in-830 for the "probability of a release" of plutonium in such an accident. Between 28 degrees north and 28 degrees south covers much of South America, Africa and Australia.

"NASA is planning a mission that could endanger not only its future but the state of Florida and beyond," declares John Stewart of Pax Christi Tampa Bay, a leader in Florida in challenging the launch. "The absurd - and maddening - aspect of this risk is that it is unnecessary," says Stewart, who is also a teacher. "The locomotion for NASA's Sojourner Mars rover, launched in 1996, and the Spirit and Opportunity Mars rovers, both launched in 2003, was solar powered, with the latter two rovers performing well beyond what their engineers expected. Curiosity's locomotion could also be solar-powered. NASA admits this in its EIS, but decided to put us all at risk because plutonium-powered batteries last longer and they want to have the 'flexibility to select the most scientifically interesting location on the surface' of Mars."

Bruce Gagnon, coordinator of the Global Network Against Weapons & Nuclear Power in Space, which has been opposing NASA's nuclear missions for two decades, says, "NASA sadly appears committed to maintaining its dangerous alliance with the nuclear industry. Both entities view space as a new market for the deadly plutonium fuel. The taxpayers are being asked once again to pay for nuclear missions that could endanger the lives of all the people on the planet. Have we not learned anything from Chernobyl and Fukushima? We don't need to be launching nukes into space. It's not a gamble we can afford to take."

There have been accidents in the use of nuclear power in space. Of the 26 US space missions listed in the EIS which have used plutonium, three underwent accidents, the EIS admits. The worst occurred in 1964 and involved, it notes, the Systems for Nuclear Auxiliary Power (SNAP)-9A plutonium system aboard a satellite that failed to achieve orbit and dropped to earth, disintegrating as it fell. The 2.1 pounds of plutonium fuel dispersed widely over Earth. The late Dr. John Gofman, professor of medical physics at the University of California at Berkeley, long linked this accident to an increase in global lung cancer. Following the SNAP-9A  accident, NASA switched to solar energy on satellites. Now all satellites and the International Space Station are solar powered.

But NASA kept using plutonium as a power source on space probes, maintaining that solar energy could not be utilized beyond the orbit of Mars. But in August 2011, NASA reversed itself with the launch of its solar-powered Juno space probe to Jupiter.

In its description of the Juno mission, NASA states that even when the probe gets to Jupiter, "nearly 500 million miles from the Sun," its panels will be providing electricity.

The plutonium-fueled Curiosity mission could herald an expanded NASA space nuclear power program - not just for space probes but for nuclear propelled rockets.

During the 1950s and 1960s, NASA, working with the US Atomic Energy Commission (AEC), built such rockets under a program called Nuclear Engine for Rocket Vehicle Application (NERVA) and then under Projects Pluto, Rover and Poodle. Billions in 1950s/1960s dollars were spent and ground testing was done, but no nuclear rocket ever got off the ground. There were concerns about a nuclear rocket blowing up on launch or crashing back to Earth.

Charles Bolden, a former astronaut and US Marine Corps major general and President Obama's appointee to head NASA, is a big booster of nuclear propulsion for rockets. He has been pushing a design developed by a fellow ex-astronaut, Franklin Chang-Diaz, who has founded the Ad Astra Rocket Company.

With NASA turning over many space activities to private industry with the end of its shuttle program, another major private company involved is SpaceX.  The web site of the journal Nature reported last year that SpaceX wants the US government to "return to developing nuclear-powered rockets pursued during the 1960s" - and specifically NERVA. "We have to do nuclear," stated Tom Markusic, director of the company's rocket development facility.

Meanwhile, there have not only been advances in solar energy as a power source in space, as demonstrated by the Juno space probe mission, but also in using nonnuclear technology to propel spacecraft. Last year, the Japan Aerospace Exploration Agency launched what it termed a "space yacht" called Ikaros which gets propulsion from the pressure on its large sails of ionizing particles emitted by the Sun. The sails also feature "thin-film solar cells to generate electricity and creating," said Yuichi Tsuda of the agency, "a hybrid technology of electricity and pressure."

NASA has also been pushing for establishment of a production facility for plutonium for space use to be situated at Idaho National Laboratory.

Plutonium has long been described as the most lethal radioactive substance, and the plutonium isotope used in the space nuclear program, and on the Curiosity rover, is significantly more radioactive than the type of plutonium used as fuel in nuclear weapons or built up as a waste product in nuclear power plants. It is plutonium-238, as distinct from plutonium-239. Plutonium-238 has a far shorter half-life - 87.8 years - compared to plutonium-239, with a half-life of 24,500 years. An isotope's half-life is the period in which half of its radioactivity is expended.

The far shorter half-life of plutonium-238 compared to plutonium-239 results in it being extremely hot. This heat is translated in a radioisotope thermoelectric generator into electricity.

The pathway of greatest human health concern for plutonium is the lungs: breathing in a particle can lead to lung cancer. A millionth of a gram of plutonium can be a fatal dose. The EIS for the Mars Science Laboratory mission speaks of particles that would be "transported to and remain in the trachea, bronchi, or deep lung regions." The particles, "would continuously irradiate lung tissue."

A key issue in terms of effects is whether the plutonium remains as the marble-sized pellets fabricated for space use or is dispersed as fine particles that can be inhaled.

The EIS also describes "secondary social costs associated with the decontamination and mitigation activities," including: "Temporary or longer term relocation of residents; temporary or longer term loss of employment; destruction or quarantine of agricultural products including citrus crops; land use restrictions which could affect real estate values, tourism and recreational activities; restriction or bans on commercial fishing; and public health effects and medical care."

Pax Christi is asking people to call, email or write NASA and, says Stewart, state, "that until they can launch spacecraft without nuclear materials aboard, they should not launch at all." Also, it is calling for people to contact the White House "and tell President Obama that Curiosity should stay safely on the ground until it can be launched without threatening us and future generations."

Opponents of the launch have posted an online petition to the White House - "Cancel the Launch of the Mars Rover Curiosity by NASA Which is Powered by Dangerous Plutonium-238." They have also created a Facebook page warning people not to visit Disney theme parks in Orlando during the launch window. "Don't Do Disney brought to you by NASA," the Facebook page is titled.

Demonstrations in Florida are also planned.

The "grunt" in the space probe named Phobos-Grunt is the word for soil in Russian. The probe was to bring soil back to Earth from Phobos. Reuters has reported that "Phobos-Grunt is also carrying bacteria, plant seeds and tiny animals known as water bears, part of a US study to see if they could survive beyond the Earth's protective bubble."

(This story was originally published in Truthout on Thursday 24 November, 2011, and has been republished under a Creative Commons licence.)