An extensive CSIRO survey shows that there is much more of a consensus in Australia about whether climate change is happening – and far fewer deniers – than most of us think. CSIRO research group leader Iain Walker reports on the results.

The ABC recently ran the documentary I Can Change Your Mind About … Climate Change, exposing Nick Minchin, former conservative politician, and youth activist Anna Rose, to science and argument in favour of and opposed to climate change and the need to do something about it.

It would surprise no social psychologist that neither Minchin nor Rose changed their minds. Strong minds do not change easily or willingly. As Ecker and Cook eloquently describe, people generally engage in motivated cognition rather than approach information rationally.

The documentary, as well as continuing media coverage of debate in Australia about climate change, creates the impression that national opinion is strongly divided over climate change. Australians’ opinions are actually more aligned than we think. In reality the nation is close to a consensus that climate change is happening.

A national survey by the CSIRO sheds some light on public beliefs about climate change and support for government action. The survey of more than 5,000 people was conducted in July and August 2011, before legislation was put to parliament to introduce a price on carbon. The survey follows a similar survey done in 2010. 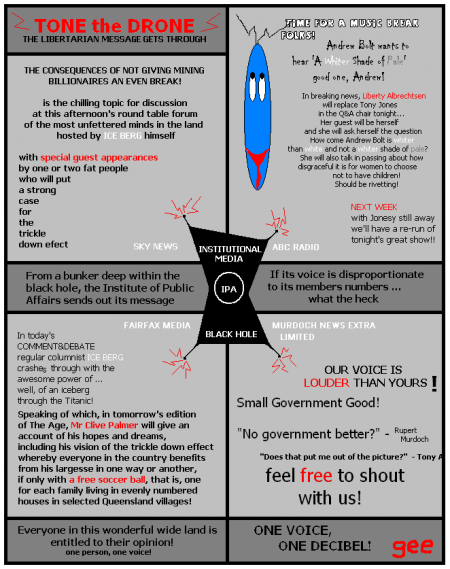 Most Australians – nearly 9 in 10 – accept that the climate is changing. Less than 1 in 10 say they think it isn’t.

This 90% majority is roughly evenly split between those who think climate change is mainly due to human activity and those who think it is a natural phenomenon. The proportion of Australians accepting climate change has altered little in the last year, despite the heated debates that have occupied the country and the mainstream media.


Australians’ beliefs about others’ beliefs

Humans generally are poor judges of how widespread their own and others’ opinions are. When it comes to climate change, the majority view is that climate change is happening. Yet everyone underestimates how common this view is.

Most Australians grossly overestimate the proportion of the population that denies climate change. On average, people figure that about 22% of Australians are “deniers” – more than three times the actual proportion! Why do these misperceptions happen?

One possibility is that these misperceptions reflect the airplay and column inches given to those opposed to climate change. When confronted with evidence that a consensus does not exist, it is common for people to think that those that who don’t share their opinion have something wrong with them: a phenomena seen on all sides of the climate change debate.

The CSIRO survey also revealed another important effect in how we think about our own beliefs and others’: people always think that their own belief is the most common belief in the country. This overestimation of the commonality of one’s belief is most evident among disbelievers.

Overestimating how common our beliefs and opinions are is a well-know phenomenon in social psychology. It exists across many different domains. There is nothing unique about climate change that is causing this effect in the CSIRO survey data.

What is unusual in the CSIRO survey data is the gross overestimation of how widespread rare views are.

Perhaps these misperceptions about Australians’ beliefs about climate change are a major reason why debates get heated and polarised, and why it is hard for people to change their minds.

There seems to be a polarisation of views around support for human-induced climate change, and about the costs and implications of actions such as putting a price on carbon.

In reality, there is much greater public acceptance of human-induced climate change than many would have us believe.

The climate science is clear. Climate scientists are clear. It appears that the Australian public is also quite clear, but does not yet realise its own clarity.