CSG "frackademia" under the spotlight

A LEADING United States university has decided to pull the plug on a research institute focussing on energy from gas after questions were raised over its ties to the industry.

Bloomberg reports that the 'potential conflicts of interest'  had created  a 'cloud of uncertainty' over the work of the Shale Resources and Society Institute at New York’s State University at Buffalo.

Investigations led by the non-profit Public Accountability Initiative  alleged there were flaws in the institute’s research, which had engaged in 'industry-spin' while the authors of the institute’s sole report had failed to disclose previous industry ties.

In closing down the institute, the University’s president Satish Tripathi said in an open letter:


'Conflicts – both actual and perceived – can arise between sources of research funding and expectations of independence when reporting research results. This, in turn, impacted the appearance of independence and integrity of the institute’s research.'

DeSmogBlog has been rather less forgiving, placing the institute’s research into a new category it has dubbed “frackademia”.

Tripathi said that given the university’s “geographic situation” in the line of sight of the booming shale gas industry, it was important the university played a role in research into energy and the environment.

But it seems that even the perception that the university might be funded by the industry (it has claimed the institute hadn’t received industry cash) was enough for the “cloud of uncertainty” to overshadow work it was doing.

Yet the difference here is that the university has openly welcomed millions of dollars of coal seam gas funding. The UQ Centre for Coal Seam Gas‘ multi-million dollar budget dwarfs that of the Buffalo institute, which according to the student newspaper had an annual budget of just $177,000.

The Centre for Coal Seam Gas runs on a “membership model” with a minimum funding commitment of $2.5million over five years. Published figures show that of the centre’s $16 million in contributions over five years, $15 million has come from major gas companies. So far, British-owned BG Group (Queensland Gas Company) has pledged $10 million, Arrow Energy (owned by Royal Dutch Shell and PetroChina) $2.5 million and Santos $2.5 million. 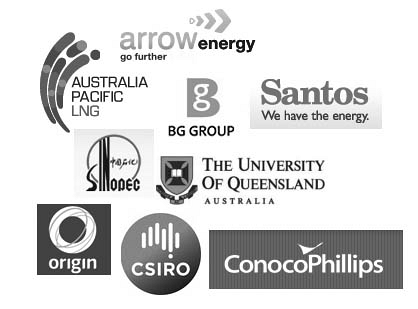 When the centre was launched in December 2011 by then Queensland Premier Anna Bligh, the university said:


"As the world transitions to cleaner energy fuels the demand for gas will only continue to increase. Electricity generated from gas has a lower carbon intensity than coal-fired electricity and therefore coal seam gas has a role to play in a cleaner energy future. Queensland is in a prime position to help fulfill this need."

This ignores, of course, the mounting questions about the actual carbon footprint of coal seam gas, which neither the state government nor federal government appears interested in independently assessing.

Last week, further questions were raised over the climate change impact of the industry when researchers from Southern Cross University revealed they had discovered levels of the potent greenhouse gas methane at triple their normal levels at a Queensland gas field. Rather than welcome the research, the Federal Energy and Resources Minister Martin Ferguson has  sided with the gas industry and attacked the scientists.

The CCSG centre is part of the Sustainable Minerals Institute at UQ, which gets more than half of its funding via the minerals and mining industry.

One of the CCSG’s project leaders, Professor Neal Menzies, describes his research project within the centre under the title “Interactions of Coal Seam Gas Development with Agriculture and Forestry”. This work appears to focus on helping the industry to gain its “social licence” to operate.

In an online profile of his work, Professor Menzies says:


'The coal seam gas industry needs the broad support of the Australian community. The interface between the agricultural and gas industries has been one characterised by a great deal of friction. This need not be so… with appropriate management, the combination of agricultural production and gas extraction should be able to deliver a bright future. Our work will help the rural communities and the coal seam gas companies achieve this outcome. For the companies, this represents a continued social licence to operate; a valued outcome.'

But UQ is not on its own here. Australia’s chief scientific agency, the CSIRO, has also forged links with the industry and established the $14 million Gas Industry Social and Environmental Research Alliance. GISERA is researching the 'socio-economic and environmental impacts of the natural gas industry'.

As the alliance’s fact sheet states, the idea for the initiative was promoted from the beginning by a consortium of gas companies, Australia Pacific LNG – a $23 billion project joint-owned by Origin, US-based ConocoPhillips and Chinese company Sinopec.


'Australia Pacific LNG was instrumental in the genesis of GISERA, partnering with CSIRO to provide impartial and independent scientific research for the benefit of industry, government and community alike.'

According to the project’s environmental impact statement, APLNG will drill about 10,000 coal seam gas wells in Queensland and lay about 450 kilometres of pipeline to its LNG facility on Curtis Island, where up to 18 million tonnes of LNG per year will be exported.

The point here is not whether projects like these are able to sufficiently distance themselves from the millions of dollars in cash from the coal seam gas industry which they rely on to exist. Perhaps they can, although pardon me if I’m sceptical.

Rather, the perception from the public will understandably be that major publicly-funded institutions are being seconded to aid the growth and financial profits of the coal seam gas industry.

This is a line separating corporations and publicly-funded institutions that is being well and truly blurred.

6 April 2019, 11:00am According to misinformation from sources such as Sky News and scientist Peter Ridd ...