Coal or bust: How Abbott is stranding Australia

While the world ditches fossil fuels and turns to renewables, Tony Abbott doubles down on coal. Economist Warwick Smith says this may be dooming Australia.

THE ABBOTT GOVERNMENT appears intent on dismantling the small but vibrant renewable energy industry in Australia.

At the very moment the rest of the world is coming to their senses about the need to wean themselves from coal, Abbott is spruiking coal’s future, claiming that leaving it in the ground is one of the most damaging things this country could do. In fact, the Coalition Government’s attitudes towards coal and renewables are likely to be extremely damaging to our economy in the medium to long term.

The combination of weak global coal prices and climate action announced by the United States and China have been cited as reasons for the cancellation of the massive Dudgeon Point coal export facility. It won’t be the last coal project in Australia that gets cancelled because of climate change action.

In fact, I think it’s reasonable to say that eventually virtually all coal projects will be cancelled due to climate action (I leave some room for coal mining for carbon fibre production). However, the coal industry and those who stand to make a lot of money from the coal industry, including the banks, are trying to make hay before the sun sets.

Renewable energy is the future of energy. Anybody who says otherwise doesn’t understand the inexorable march that renewables are on and the slow but steady acceptance of climate science.

The big unknown is how long it will take for renewables to replace fossil fuels and how much damage we will do to the climate in the meantime.

The coal industry is in the same place tobacco was in the 1960s. They know the gig is up but the longer they can muddy the waters and cast doubt on the science the more money they can make.

The history of the tobacco industry, and many others besides, shows us that people really do make decisions in the name of profit they know will cost many lives. It’s happening in board rooms all across the world right now.

Mining is an expensive activity and these companies don’t want to lose too much money when the coal industry inevitably shuts down. This is where they need politicians like Abbott and Hockey to keep providing them with the subsidies, incentives and infrastructure and to protect them from competition and regulation for as long as possible.

The miners and fossil fuel generators want governments to shoulder the risks associated with coal while they privatise the last dregs of the profits. State Governments are on side too, spending nearly $3 billion dollars every year directly subsidizing mining companies.

In the early days of the Abbott Government, I labelled them as fairly radical free market ideologues. I quickly realised this was inaccurate, as they are not interested in small government or free markets when it comes to benefits for the wealthy.

The most parsimonious explanation for their policies is plain old capture by vested interests.

Abbott and Hockey are either in the pockets of the mining, energy and financial industries or they are doing favours for mates who are in those industries. Nothing they have done is inconsistent with that conclusion.

The Abbott Government want this country stuck with 20th century power infrastructure and they are throwing everything at an effort to keep our economy dependent on a fossil fuel future. The result in the medium to long term will be extremely damaging for this country as the world passes us by on the way to renewable energy — or climate catastrophe. Either way, we don’t do well.

As this happens, more and more of Abbott’s precious coal and coal infrastructure will be stranded with no buyers. If he has his way and manages to destroy the country’s renewable energy sector, not only will we suffer from the stranded coal assets, but we will be totally reliant on importing expertise and equipment from overseas in order to replace our fossil fuel infrastructure.

Now is the time for the Australian economy to be diversifying if we’re not to become an economic backwater. We can’t be world’s quarry forever, particularly in a carbon constrained global economy.

Removing subsidies for fossil fuel industries would be a good start but it can’t end there. For the long run benefit of the country we should be prioritising investment in education, infrastructure, productivity and R&D.

This early part of the 21st century is a time of massive economic, ecological and social change. Our society and economy must be diverse and robust if we are to thrive in this new environment and we will require more than bloated mining and financial sectors.

Warwick Smith is a research economist at the University of Melbourne. He blogs at reconstructingeconomics.com and tweets @RecoEco. 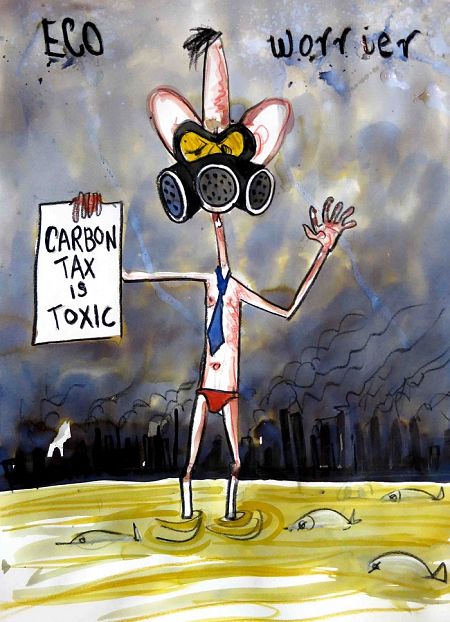