'Imagine not believing in climate change, the immense relief for it to all be a hoax or for the scientists, thousands of them in tens of thousands of studies over decades, to all be wrong'

The van hurtles along a suburban road past homes and small corner stores. It swerves through an intersection, tyres skidding and squealing as the driver wrenches the wheel first one way, then the other.

The van tilts to one side. The wheels lift off the ground and for a moment it hangs in the air before crashing onto its side, steel leaving a trail of sparks as it mounts the curb and pins a bystander beneath it.

Quickly a crowd of people gather and take a handhold wherever they can. Men and women strain together struggling to lift the vehicle’s weight off the person crushed beneath.

“Quickly, grab a hold and help us,” one calls out to you pointing to a spot on the bumper.

“Sorry. I can’t lift a whole van,” you reply. “So I’ll sit this one out. Also I don’t think the people in that shop are doing their fair share and I shan’t be lifting an ounce until they do.”

Now imagine this example as a metaphor for action on climate change.

The metaphor is not mine, but it’s the perfect response to a now common rebuttal against taking action on climate change — that the contribution of [insert country here] wouldn’t make a difference due to its small contribution to global emissions.

The follow up: [insert another country here, often China] isn’t doing their fair share anyway is often thrown in for good measure.

It's nonsense. Just because you cannot solve global emissions problems alone does not mean you should do nothing.

In fact, as this graph shows, if all of the countries who produce less than two per cent of global emissions were to all band together they would have a larger impact than any other single country. 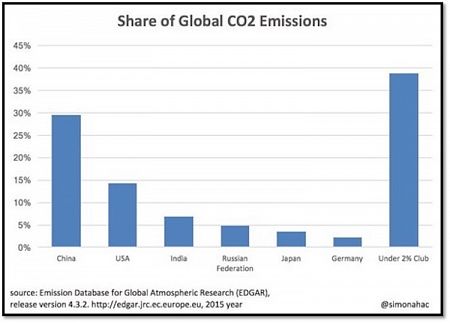 But still, this lie is offered, cited and believed.

It’s one of a number of lies – if you’re interested, there is a good list along with rebuttals on Skeptical Science – and the ease with which they are disproved makes how devotedly people cling to these falsities all the more strange.

It isn’t just climate change — there are numerous subjects where delusions that are easily proven false are still clung to, like scraps of driftwood after the sinking of the Titanic.

Schrödinger’s immigrant who simultaneously steals jobs and bludges on welfare, Brexit leavers unable to explain their vote, anti-vaxxers and waves of hatred unleashed against Islam after terror attacks, despite Muslims often being slaughtered in those very incidents.

Ignorant and irrational beliefs are everywhere for a simple reason: these lies are empowering.

The people who tell them are often more empowering than you are if you’re trying to combat them.

The acceptance of stupid lies by intelligent people, the furious backlash and the increasing cries of “political correctness” all take on a different appearance when you look at them through the lens of empowerment.

In James O’Brien’s bestselling book, How To Be Right: … in a world gone wrong, he laments the obvious lies and contradictions in the immigration debate:

'That it all seems so obvious makes the question of why people embrace these manipulations so enthusiastically all the more perplexing. The only answer I’ve come up with after years of talking … is that they somehow enjoy being frightened.'

While I agree with the start of his point and agree that in the media “if it bleeds it leads”, I disagree with his conclusion.

People don’t want to be terrified of being attacked by their neighbours. But they are morbidly captivated by stories of terror, and seek to create reason and order in a world they feel doesn’t make sense and is dangerous. So they cling to ready-made and empowering answers.

The alternative, what is offered by those “on the side of the angels”, is often disempowering, frightening, complicated and confusing.

In a world which is growing more complicated, the allure of easy answers will only grow stronger. Engaging emotionally with these issues forces you to ask yourself a question: What will I do about this problem?

I added a video to a @YouTube playlist https://t.co/5fjsHminfu How To Be Right In A World Gone Wrong | James O'Brien | RSA Replay

Applying that to climate change and taking action on it, looks like this:

Deciding that climate change is a hoax is a much simpler process:

You can tie yourself in knots justifying that belief but what it comes down to is that answer — decide climate change is a hoax and enjoy the power and utility it gives you.

Imagine not believing in climate change, the immense relief for it to all be a hoax or for the scientists, thousands of them in tens of thousands of studies over decades, to all be wrong.

This approach isn’t just to do with climate change. Take the current political football of choice the world over, of terrorism and attacks by radicalised Islamists. Ask the question: What can I do about this?

A classic moderate but disempowering answer is that there is a range of complicated factors that lead to this radicalisation and attacks of terrorism, including existing anger and alienation as well as mental disease.

Preventing attacks will require a combination of:

Take the approach that all Muslims are to blame and the answer is:

Again, how simple it would be if this were the actual answer?

But it isn’t. And acting like it is leads to feelings of “rage, alienation and despair” — exactly what actual terrorists want and recruit off.

People who stoke these fires – the sloganeers and charlatans – have recognised that simple answers are empowering and easy to sell.

They are little more than thought arms dealers who provide ready-made weaponised lines for battle that preclude thought and shut down debate.

Which can turn every conversation into a fight but doesn’t stand up to any scrutiny or close inspection.

Then there is “political correctness” — a legitimate complaint but now most often deployed by those who cannot – or do not want to – explain their views, as a defence mechanism.

But again, this isn’t ignorance or willful stupidity, it’s someone reacting at their empowerment being taken away from them.

To paraphrase writer Upton Sinclair: It is almost impossible to get someone to understand something when their happiness and sense of security depends on them not understanding it.

Someone who reacts with extreme anger when challenged about these issues isn’t just upset at being told they are wrong — they are upset you’re trying to take away something that gave them security and empowerment, and are trying to get them to confront something uncertain and terrible.

Someone told them “yes”, things really are that simple and easy to fix and that people who don’t like it are being “politically correct”, and you’re trying to take that away.

No wonder they get upset.

Not to say there are not cases of absurd political correctness — there are. But it is, precisely, that they are so rare that makes them newsworthy.

Emphasise what can be done, not what can’t. Talk about what is already happening.

You don’t have to provide a complete solution at the outset — there is always the first step on a path.

Don’t conflate absolute disclosure with honesty. These two things are not the same.

Don’t be tricked into repeating the lies you’re trying to refute. Telling your truth without offering the other side’s take is not dishonesty, especially when you are fighting a side who sell outright lies.

Linguist George Lakoff spoke recently about how badly people are contending with President Donald Trump, who is a comforting and empowering lie spitting machine.

A lot of Democrats believe in what is called "Enlightenment" reasoning and that if you just tell people the facts, they’ll reach the right conclusion. That just isn’t true.

​​​​​People think in terms of conceptual structures called frames and metaphors. It’s not just the facts … [but people] keep trying to employ reason as a persuasive vehicle. I wish Enlightenment reasoning was an accurate model for how most people think and judge, but it isn’t. And we better acknowledge that fact.

When it comes down to it, remember that people don’t care as much as you do and a lot of the time they are looking for excuses not to think about, or to forget difficult or unpleasant issues.

It’s hard for a problem like climate change to be so big it cannot be ignored — until it’s too late.

To stop it ever getting to that point, we have to be more persuasive than the other side. And that means finding a way to be empowering.

Simon Black is the senior media campaigner for Greenpeace Australia Pacific. You can follow Simon on Twitter @mrsimblaa.

Malcolm Roberts: Breaking the laws of physics with each climate denying claim https://t.co/9cW8hTWaIP The moron is strong with this one.

22 January 2019, 7:00am What are the ramifications of Japan's decision to resume commercial whale hunts?

11 December 2018, 7:00am “If you were doing your job properly, we wouldn't be here.”
Join the conversation
comments powered by Disqus
News updates