The extreme heat, floods and bushfires which affected Australia earlier in 2013 were unexpected — and scientists say it is almost certain that human influences had increased the odds significantly. Tim Radford reports for Climate News Network.

GLOBAL WARMING has increased five-fold the probabilities that Australians will bake in record hot summers, according to new research from the University of Melbourne.

And human activities – including greenhouse gas releases from fossil fuels – must account for at least half of these extreme summer temperatures of the future, the scientists say.

Sophie Lewis and David Karoly report in Geophysical Research Letters, a journal of the American Geophysical Union, that they used climate observations and more than 90 climate model simulations to deliver their verdict, and to highlight the unexpected nature of the events of the first months of 2013, the hottest in the country’s observational record.

Australians are used to summer heat, drought and periodic bush fires as part of the continent’s natural cycle, and these are often linked to a Pacific Ocean temperature phenomenon known as El Niño, dubbed “the Child” in Peru because it tends to occur around Christmas time.

But there was no El Niño: if anything, the ocean heat was turned down a little in a counter phenomenon called La Niña. So the extreme heat, catastrophic flooding and devastating bushfires early this year – the southern hemisphere summer – were certainly not expected.


“This extreme summer is not only remarkable for its record-breaking nature but also because it occurred at a time of a weak La Niña to neutral conditions, which generally produce cooler summers. Importantly our research shows the natural variability of El Niño-Southern Oscillation is unlikely to explain the recent record temperatures.”

Sophie Lewis, who is also at the Australian Research Council’s Centre of Excellence for Climate System Science, warned that such extreme summers will become even more frequent and more severe in the future, as the planet warms further.


Adaptation the only choice

Between December 2012 and February 2013, Australians experienced the hottest month in the nation’s recorded history, and the hottest day. There were fierce and destructive bush fires in Tasmania and Victoria, and severe flooding in New South Wales and Queensland. The Australian media dubbed it “the angry summer”. The two scientists said:


“We cannot categorically ascribe the cause of a particular climate event to anthropogenic climate change; however, the roles of various factors contributing to the change in odds of an event occurring can be identified." 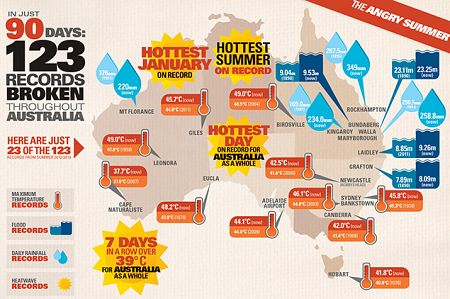 They examined the historical record of more than 150 years of observation, and found, repeatedly, that extreme summers tended to occur in step with El Niño years: in fact were three times more likely to happen in an El Niño year than a La Niña season.

Clearly, something else was at work in the summer of 2013. Natural climatic variations were not likely to have caused the bush fires and the floods. It was possible to say, with more than 90% confidence, that human influences on the Australian atmosphere had dramatically increased the odds of extreme temperatures.

By the end of the century, other studies have shown, 65% of all summers are likely to be “extremely hot”. There was also research that suggested longer summers – that is, shorter springs and autumns – might be expected as carbon dioxide levels continued to rise. In those parts of Australia that were both heavily populated, and at risk of bush fire, humans would have to adapt. 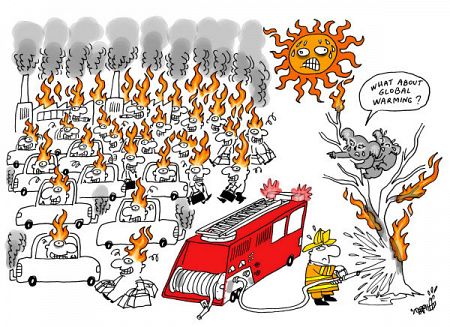