Rallies in support of action on climate change were held in most Australian capital cities on Sunday. Kelly Hockley was proud to be at one of them with her family.

Rallies saying “yes to climate action” were held on Sunday in almost every capital city across Australia. Thousands of Australian people, young and old, gathered to show their support for the controversial carbon tax proposed by the Gillard Government.

With my children and an estimated 5,000 other people, I braved the bitterly cold day and attended the Adelaide rally to show our support. 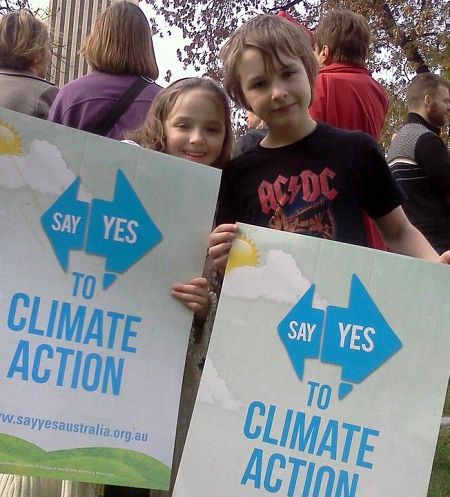 Adelaide’s atmosphere proved nothing short of inspirational and the city was electric, with bands playing and people joyously dancing to show their support for the initiative and about standing up for the environment. It was very pleasing to be able to take part with my children, to be able to show my support for positive change for the planet and for their future.

Australia is amongst the worst carbon emitters in the world and we rely heavily on coal for our power and export tonnes of the fuel to Asia. The average person in this country emits 20.58 tonnes of CO2 per year. That is a hell of a lot of damage we are doing to our environment.

There is no denying that Australia is experiencing rapid climate change. Humans and our activity are the most likely cause of global warming since the 1950s. Temperatures have increased by almost 1 degree Celsius in the past one hundred years and if we don’t act now it could continue to increase by up to 6 degrees Celsius by the end of the century.  We are already starting to see the possible results of climate change in this country through more intense storms and tropical cyclones. It has been warned that there is more to come. Our water resources have depleted over recent years, especially in south eastern Australia. This precious resource, with continuing climate change, will most likely be further stressed with a greater likelihood of droughts in the future.

Climate change Minister Greg Combet says a new report shows the impact of global warming could prove catastrophic if Australia does not take action. Clear scientific evidence proves that the atmosphere and the oceans are warming, making ice glaciers melt and causing sea levels to rise.

Infrastructure, including buildings and businesses, worth $226 billion could be at risk around Australian coastlines by the end of the century if the sea levels rise by the 2.1 metres estimated.

The Gillard Government has pledged that the carbon price will be fair and the Minister Greg Combet has said:

“I can assure you...we would want to design a carbon price that is fair to people who need the most help, low-and-middle income earners and pensioners.”


Of course, Australian’s have heard nothing but negativity on pricing carbon from the master of fear himself, Tony Abbott. This man is so out of touch with the real world, that in order to gain popularity and votes he is willing to risk the planet for future generations by claiming that pricing carbon will cause job losses and damage the coal industry. Australian’s are quickly wising up and looking beyond his tired and tedious scare tactics.

We must act now; our planet and future generations depend on it. The time has come for all Australians to take responsibility and action for our planets well being. It is time polluters pay a price on what they are doing to our Earth’s environment and high time that all Australians started using clean and renewable energy.
ENVIRONMENT climate change Environment Greg Combet Julia Gillard Kelly Hockley sea levels rising Tony Abbott