On the 66th anniversary of Hiroshima today, in a week when record levels of radiation have been found at Fukushima, David McNeill looks at the way the nuclear industry has corruptly colluded with regulators in Japan and Britain to quieten valid public safety concerns about nuclear power.

With no end in sight to the world’s worst atomic power crisis in a quarter of a century, collusion between Japan’s nuclear industry and its supposedly neutral government watchdogs is, perhaps for the first time, under serious scrutiny. In May, inspectors from the International Atomic Energy Agency singled out the lack of independence between regulators and the industry during a trip to Japan, noting that the Ministry of Economy, Trade and Industry (METI) simultaneously promotes nuclear power and oversees it. Prime Minister Kan Naoto has since ordered a government committee to probe that relationship, though puzzlingly, committee head Hatamura Yotaro has said that it “will not aim to clarify” who is responsible for the accident.

Such blurring of the public and private has long been seen as a peculiar feature of Japan’s political and economic architecture, so it might come as a surprise to some to discover that Britain is not immune to similar collusion. The Guardian newspaper (link) reports that officials from the UK government’s Department for Business, Innovation and Skills covertly reached out to British, French and US nuclear companies in the days after the Fukushima crisis erupted. According to the daily, the officials fretted that anti-nuclear activists would “waste no time blurring this all into Chernobyl” and urged close industry-government cooperation. “We need to all be working from the same material to get the message through to the media and the public,” said one. A few weeks after the memos were written, Japan's Nuclear and Industrial Safety Agency raised the rating of the disaster to 7, putting it on a par with the Chernobyl meltdown of 1986.

Behind the collusion is simple calculation. Britain’s government has committed the country to building eight new nuclear power stations, which it says are the cheapest low-carbon options available to the country. The US successfully ordered its last new plant in 1973 but now plans to build at least another four. And France, which generates about 80 percent of its electric power from nuclear plants, is a leading exporter of nuclear technology to China and other developing economies. Fuelled by the demand for carbon-cutting energy strategies, the industry only recently emerged from the pall cast by the Chernobyl disaster and was preparing to build up to 150 new plants over the next two decades. Then came Fukushima.

The global political fallout from the Japanese disaster was immediate. Germany, the world’s fourth largest industrial nation, committed in June to replacing nuclear power with renewables by 2022. Italy voted overwhelmingly by referendum the same month to abandon plans to restart its nuclear program and Switzerland seems to be moving in the same direction. Thailand, China and Japan put nuclear plans on hold, perhaps temporarily, but at least in Japan, the search for alternative energy sources has been pressed at the highest levels. Public opinion drove all those decisions, with Fukushima helping to tip the majority of already wary citizens in some European nations into the anti-nuclear camp. In Britain the situation is more ambiguous. The first major poll commissioned by environmental watchdog Friends of the Earth a week after the Fukushima crisis found 35 percent of respondents strongly or slightly in favor of replacing the nation’s aging reactors, with 28 strongly or slightly opposed (link). 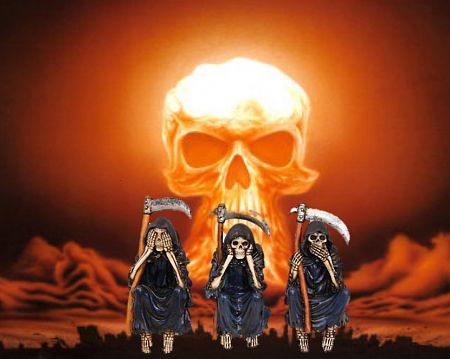 The figures showed a shift from 47 percent in favor / 19 percent against recorded pre-Fukushima, but they still allow the government and the industry wriggle room denied in Germany and Italy. Hence the importance of a strategy for the pro-nuclear British government to spin the world’s worst nuclear accident in 25 years in a way that would minimize its impact on Britain’s citizenry.

Falsely assessing the unfolding disaster on March 13, two days after the earthquake tsunami, an official with the Department of Business said that the reactors in the Daiichi plant were secure and that radiation releases had been “controlled,” when in fact reactors 1, 2 and 3 were already in a state of partial or total meltdown. The official invited Westinghouse, Areva and EDF Energy, all pillars of nuclear power production, to contribute to government briefs and statements. "We need to all be working from the same material to get the message through to the media and the public,” the official said. The same companies were later invited to meet and discuss a “joint communications and engagement strategy” to reassure the public that post-Fukushima nuclear power is safe. On June 23, the government proceeded to confirm plans to build eight new nuclear reactors in English and Wales (link).

Such spin and manipulation of information is likely to continue in the coming months as the industry struggles to recover. As I write, news comes that the operator of the Genkai nuclear plant in Japan’s Saga Prefecture instructed its workers to bombard a public meeting on whether to restart the reactors with emails and messages of support. The meeting, shown live on cable TV and over the Internet, debated restarting two suspended reactors and invited viewers to send their opinions. The mayor of Genkai, Kishimoto Hideo, later gave Kyushu Electric Power Co. the green light, unaware that the company had manipulated the debate. It remains to be seen if that symbolic decision – the first restart of a suspended plant since March 11 – will now stand.


(David McNeill writes for The Independent, The Irish Times and The Chronicle of Higher Education. He is an The Asia-Pacific Journal coordinator. This article was published in Truthout on 16 July 2011 and has been republished under a Creative Commons licence.)