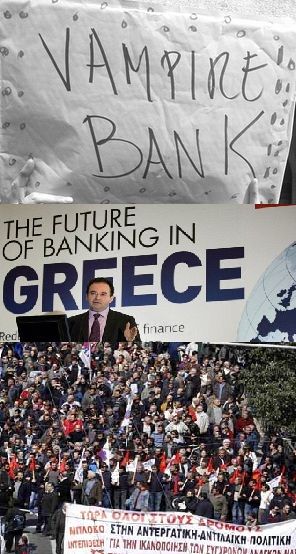 As Greece moves closer to default, Peter G Prontzos says the crisis was caused by global investors looking for a greater share of the wealth — a situation far from unique to Greece.

Once again, democracy has been crushed in the very land where it was born.

Despite unprecedented opposition by the vast majority (70 to 80 per cent) of the population, the Greek Parliament surrendered its national sovereignty by giving in to the harsh demands of "The Troika” — the International Monetary Fund (IMF), the European Central Bank and the European Commission.

While the situation is complex, one point is clear: the great majority of Greeks were not responsible for the enormous debt that had built up over the last decade.

Part of the responsibility rests with the political and economic elites within Greece, who run the country as if it were their own personal fiefdom. The selfish pursuit of power and profit mattered more than the wellbeing of the Greek people.

The decision to join the EU and to adopt the euro, while bringing some benefits, also caused severe inflation and made Greece less economically competitive. It surrendered much of the control of the economy to the European Central Bank.

The global recession that began in the United States in 2008 hammered Greece, causing unemployment and driving up the debt. In addition, Greece has been burdened for years by a flood of refugees from the Middle East (especially Iraq and Afghanistan), Africa and even South Asia. In 2010 alone, 150,000 illegally entered the country.

The result of such factors was the creation of "odious debt" — that is, debt which is imposed on the people of a country even though they were not responsible for it and for which they received little benefit.

When Greece needed to borrow money as a result of these problems, investors – such as banks, insurance companies, and other financial institutions – saw a chance to make a profit and happily gave loans, regardless of the risk. They assumed that if the country ran into economic difficulty, European governments and the Troika would force Greeks to pay, regardless of the hardships on the population.

After all, when the debt crisis hit Latin America in the 1980s and the "Asian meltdown" occurred in 1997, Washington and the IMF imposed draconian measures on those countries in order to insure that the speculators got their money, no matter the human cost.

The "structural adjustments" demanded then are much the same as are being imposed on Greece now: higher taxes on working people, severe cuts to public services, pensions and the social safety net and up to a 30 per cent reduction in pay to some workers.

Public assets will be sold to private – usually foreign – interests. The New York Times noted that the Troika is insisting that Greece sell off US$72 billion worth of the country – including nothing less than "the ports of Piraeus and Thessaloniki; prime Mediterranean real estate; the national lottery; Greek Telecom; the postal bank and the national railway system".

The money raised will be used to pay the foreign speculators and banks, at the cost of the further impoverishment of the Greek people. Like vampires, these global investors are sucking the life's blood out of Greece.

These drastic measures will, in fact, only worsen the crisis and cause the Greek economy to contract even further, just as the first round of cuts did. (Greece's gross domestic product dropped 4.4 per cent in 2010, unemployment almost doubled to 17 per cent.)

"There is no relief in sight as the EU elites continue to grind the nation into the modern day equivalent of a debtors' jail. They seem to be incapable of understanding that if you savagely cut government spending while private spending is going backwards and the external sector is not picking up the tab then the economy will tank."

It will be impossible, then, for Greeks to pay this "odious debt." Greece will be forced to default, potentially dragging down European banks and hurting both the European and world economy. North America will not be spared. It must be remembered that there are viable alternatives to increasing the suffering in Greece. After all, the Greek economy is only about 3 per cent of the EU. Some form of debt reduction and restructuring, combined with an economic stimulus and reforms to the Greek government, would help the economy recover without imposing even more suffering.

Getting the rich to actually pay their taxes would be one popular option.

The crisis in Greece must be seen in a global context for another reason. People in Canada, the United States, Spain, Ireland, Italy, Britain, and many other countries are being given the same message: your well-being must be sacrificed in the name of "austerity."

There is increasing resistance around the world to this latest form of class warfare.

In reality, however, transnational economic elites want an ever greater share of wealth, even if it means that poverty and inequality are increasing for the majority.

In 1940, when Mussolini demanded that Greece surrender or face invasion, the Greek response was a single word: "No" ("Oxi"). When Mussolini's troops attacked, the Greeks inflicted the first military defeat ever on the Axis powers.

Today, faced with a different form of attack, Greeks are responding with the same defiance as their grandparents, symbolized by banners in Syntagma Square in Athens which read, "Oxi."

Once again, Greeks are saying: "No”.


(This story was originally published in Truthout on 5 July 2011. See also: ‘The Tyranny and Devastating Glory of Greece’.)