SUBSCRIBE   DONATE LOGIN SHOP
SUBSCRIBE   DONATE
How we prevented a Morrison dictatorship
How Howard screwed the Libs
U.S. site tries to ruin what makes fairy bread great
Bloody Idiot of the Week — Episode 28: Get used to it
Morrison's 'politics of retribution'
Finance

Think For Yourself: Short Term Loans

Are short term loans a good idea when you get an unexpected bill, or the first step on the path to financial ruin? Critical thinker John Turnbull takes a look at the shady world inhabited by men in bunny suits.

Launched in November 2005 by entrepreneurs Sean Teahan and Greg Ellis, short-term lender Nimble Money has topped many ‘business success’ lists in the last few years. Also known as ‘payday loans’, Nimble offer hypothetically short-term loans for between $100 and $1,200, once claiming to approve loans in as little as 11 seconds.

In the 12 month period beginning February 2014 up until January 2015, Nimble spent an estimated $7,987,000 on advertising, of which around 81% was on television [AQX Landsbury & James, All Media National Summary, 2/2/14 – 31/1/15; note: this figure excludes Pay TV and Online media spend], which means that during 2014 Nimble spent somewhere over $8 million selling short term loans to the Australian public.

While the organization represented by a man in a bunny suit has the highest profile among payday lenders, they’re far from the only player in town. Other short term lenders include Cash Converters, ClearCash, MoneyMe, Club Money, Cash Train, Credit 24, Needy Money, Fair Go Finance, Rapid Loans and the somewhat awesomely named Loan Ranger.

The reason this article focuses primarily on Nimble is that they’re the biggest and spend by far the most money on advertising; according to L&J their closest competitor is Cash Converters, who spent a shade under $5 million during 2014, followed by MoneyMe, with a comparatively piddly estimated spend of $608,000.

They’re only short term if you pay them off

Most problems with short term loans eventuate when lenders don’t pay them off within the prescribed "short term" period.

From an article by Jessica Gardner in the Australian Financial Review:

'Customers are charged a flat fee, which is equal to about 28 per cent of the amount they borrow. A contract is drawn up and if the customer doesn’t keep to the repayment schedule, a $35 fee is charged. Customers in default are charged $7 per day while an account is overdue, for a maximum of 45 days.'

From the same article, Dan Simpson of the Consumer Action Law Centre warns:

“There’s a big difference between someone having the ability to pay a loan and someone’s ability to pay a loan without causing them to forego basic living expenses. We often hear from borrowers who have concurrent loans with multiple lenders. It’s hard to see how any technology would be able to track or predict such behaviour.”

Concurrent loans with multiple lenders suggests people are borrowing from one short-term loan company to pay off others, incurring additional fees and getting deeper into debt rather than paying off a short term, unexpected cost.

Interestingly, Nimble claim to reject four out of five people who apply for loans, which just means that people have to call one of the dozens of competitors in the market until they find someone who will lend them what they need — whether they have the ability to pay it off or not.

Who is using short term loans?

A three-year study by the University of Queensland and RMIT reported the following statistics:

One of the major reasons reported by respondents for taking out loans was having insufficient income to meet basic living expenses.

Despite what some of the ads would have you believe, the majority of short term loans seem to be taken out by people with low incomes to cover standard weekly expenses. Adding a high-interest, short term loan payment to this situation hardly seems like the best long term solution. 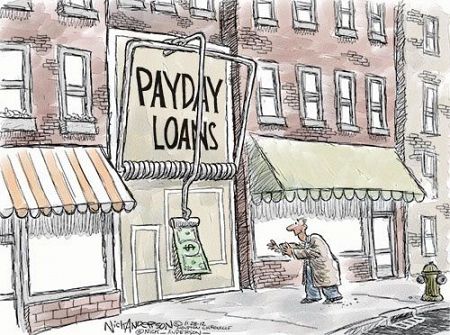 The role of government

From July 1st, 2013 the Australian Government put regulatory caps on loans under $2,000, legislating the following safeguards:

Credit providers can only charge you the following fees:

Many people argue that this regulation doesn’t go far enough to protect Australian consumers, particularly low income earners who may enter loan contracts without understanding the full potential cost. Note from the above that lenders can still charge double the borrowed amount plus undefined ‘enforcement fees’ — yet for some reason they don’t get the man in the bunny suit to mention that.

Of course, this isn’t just an Australian problem…

Payday lending was banned in May 2004 in the U.S. State of Georgia, followed shortly afterwards by North Carolina. As of April 2014, a total of 13 US states prohibit or ban short-term, high interest loans, with a number of others placing a regulatory cap on maximum interest rates. Opinions differ on whether these bans have had a net positive result, with significant focus being placed on the importance of addressing the underlying causes of poverty.

What are the alternatives?

If you find yourself facing a bill that you can’t afford to pay, your best option is to get in contact with the company in question and discuss payment options. The majority of government and consumer-facing private organisations have "hardship policies" in place to assist customers in financial distress.

If your debt is getting out of control, there are a number of relatively low cost financial management services available — the most prominent of which are My Budget and the regionally focused Beyond Debt.

For many people, short term loans are seen as a necessary evil, covering the inevitable costs of life that Centrelink payments do not. Banning payday lending will not take away the need that some people have for short term cash and some commentators suggest that it may even have the effect of driving people into underground economies (theft, prostitution, even cosplay) to cover their bills.

On the other hand, allowing low income individuals and families to enter a cycle of debt they are unlikely to escape seems unethical at best and borderline criminal at worst. The blithe assertion that you can get a short term loan and simply "move on" is demonstrably false — you need to work hard to pay off the loan within the contract period or face harsh penalties and spiralling debt.

The best advice is to avoid short term loans if you possibly can and make every effort to pay them off within the contract time in the event you do need to take one out.