The Syrian conflict and the media Matildas

The mainstream media is feeding us misinformation about the Syrian conflict, says Syd Walker. 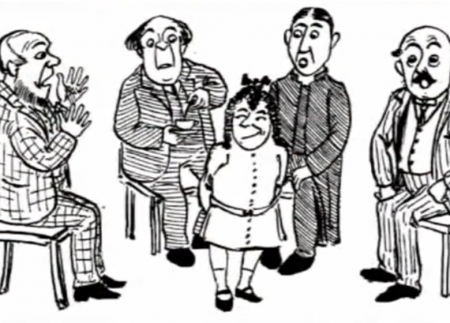 ATILDA told such Dreadful Lies,
It made one Gasp and Stretch one’s Eyes..

SYRIA – like any other nation on earth – isn’t paradise. Its governance could doubtless be much improved.

But is Syria really a society whose government has been so cruel and uncaring to its citizens that almost anything would be an improvement? Are its leaders among the most heinous despots on earth — so recalcitrant that their forced removal is the only option? Should ousting this government of Syria really be the international community’s #1 priority in 2012 — given there are so many other issues that seem to cry out for focus and resources?

I don’t believe so. Neither do a LOT of Syrians, both within their own nation and in the Syrian diaspora. But since the beginning of the so-called ‘Arab Spring’ in early 2011, our view hasn’t been popular in ‘Western’ nations such as Australia. Almost every story we hear through the mainstream media suggests Syrians are going through hell-on-earth because their government is unspeakably evil. Australian politicians – from Greens to Liberals – have all joined a chorus of revulsion at the Syrian ‘regime’. Only voices way outside the mainstream espouse contrary views.

There is an alternative perspective on the events in Syria. In Australia, dissenting views rarely get mentioned in the mass media, except perhaps to disparage them as a ‘conspiracy theories’. But that isn’t the case everywhere. In Russia or Venezuela, for example, a quite different view about Syria is mainstream opinion. It’s hard to know the state of public opinion within Syria itself; doubtless there are a range of opinions — from passionate support for the Assad government to vehement opposition. But the former is indubitably quite widespread.

According to this perspective, Syria is a nation which, though imperfect, is essentially on the right path. It has secular government — crucial given its patchwork quilt of ethnicities and religious groups. It’s true that (like our biggest trading partner, China) Syria has been a one-party state for several decades. However, its reform-minded, intelligent and cultured leader has a process underway to change that. The first steps to multi-party democracy were approved by referendum earlier this year.

Doubtless there is corruption and cronyism in Syria. But we must go a very long way to find a society unafflicted, to some degree, by the same evils. Certainly, in the Middle-East, Syria is far from the worst offender. Autocracies such as Saudi Arabia, Qatar and Bahrain make Syria look democratic and clean by comparison!

Under the alternative analysis, Syria isn’t undergoing convulsions because of an authentic internal revolt against a despotic and unreformable government. The ‘troubles’ in Syria are, in that analysis, largely driven by external interference. Peaceful ‘Tahir-style’ protests early in 2011 rapidly evolved into eternally-supported armed revolt — in a re-run of the flow of events last year in Libya. The key difference is timing.

In the case of Libya, the UN Security Council was hustled within one short month, back in Feb/March 2011, to authorise the imposition of a ‘no fly zone’. This morphed almost immediately into a 7-month non-stop bombing campaign by NATO, plus direct support for armed insurgents (especially from Gulf States such as Qatar), plus orchestrated psyops involving external mass media, social media, and key NGOs such as Amnesty, plus NATO special forces on the ground — until the nut was finally cracked and the Libyan Government destroyed.

The rest, as the saying goes, is history. Australia is now gaining insight into what a mess post-Ghadafi Libya has become. An Australian citizen, who travelled to Libya on International Criminal Court business, has been jailed; Foreign Minister Carr is learning there is no coherent central authority any more. Libya has become a shambles — and a gulag.

Yet only two years ago Libya had the highest UNDP Human Development Index ranking in Africa and boasted the continent’s lowest infant mortality and highest life expectancy. It had free education and health care. Libya’s economic growth rate was pushing 10%. Under Ghadafi’s leadership, despite unfair sanctions and sustained hostility from western nations, Libya went from having one of the lowest literacy rates in the world to one of the highest in its region. It built the largest desert irrigation project in the world, employed millions of African labourers and helped fund crucial continent-wide projects such as Africa’s own communications satellite. This high-achieving society is now in ruins.

There’s extensive overlap between the people and institutions that pushed for intervention in Libya and those now demanding the same for Syria. These include mainstream journalists and commentators as well as ‘human rights’ NGO’s and selected celebrities. Once again, we have an orchestrated campaign to vilify a sovereign nation.

The big difference, as I mentioned, is timing. UN Security Council approval for military ‘intervention’ – which gave NATO and the Gulf States a fig-leaf to cover their naked aggression against Libya last year – hasn’t happened this time. Russian and China are resisting a repeat of the Libya debacle. So there has been no NATO bombing and, more than a year after turmoil began, the Syrian Government remains in power.

From time to time, Hillary Clinton and other spokespeople for the so-called ‘Friends of Syria’ deceptively claim they don’t seek armed intervention.

They don’t acknowledge that current convulsions in Syria are the result of external intervention that’s already underway. The multi-pronged assault once again includes psy-ops via western media and “human rights” NGOs, sanctions designed to weaken Syria’s already stressed economy, training of terrorists by western “special forces” , and the arming of these terror gangs by the same Gulf states who helped destroy Libya a year ago.

What is driving the attack on Syria — and why is it so widely supported by the Western elite? In previous similar cases such as Iraq and Libya, the mainstream story was the attacks were motivated by ‘weapons of mass destruction’ (Iraq) or human rights (Libya). In both cases, dissenters were steered towards a belief that these were really ‘Wars for Oil’.

In the case of Syria, the official narrative has again focused on ‘human rights’ — but it’s not been feasible to develop a dissenting narrative that the attack is really about oil. Syria, quite simply, doesn’t have large oil reserves.

The reality – in my opinion – is that ALL these attacks, from Iraq to Syria, have been motivated most fundamentally by Israeli interests. For sure, the entire cast of aggressor nations and war-promoting shills all had their own disparate objectives. But within each of the participating Western nations, a green light from the Zionist leadership has been decisive in shaping national policy; their interest in pursuing these wars has made them happen.

Balkanisation of the Middle-East and North Africa is a long-standing Zionist policy goal. It’s much easier for Israel to face down opponents who are weakened by war, rife with internal divisions and squabbling among themselves. Syria is particularly crucial. It’s been the bridge enabling Iran to maintain contact with Hezbollah in Lebanon. In recent years, fear of retaliation from Hezbollah has been one of the main restraints on Israel — staying its hand from unleashing a full-scale attack on Iran. If Syria is destroyed, a devastating Israeli assault on Lebanon becomes likely — then on to Iran.

Can the attack on Syria be resisted? Is it inevitable it will end up divided and wrecked like Libya?

To some extent, I think that depends on the resilience of the Syrian people. Will they continue to withstand this sustained onslaught? How long can their morale hold up? So far, the Syrian will to resist has been very impressive.

Two external factors also seem crucial. The first is the resolve of Russia, China and other BRICS nations to stand up to what amounts to a blatant revival of Western imperialism. Until now, Russia has resisted with dignity, finesse and resolve. However, external pressure on President Putin and his Government to back down is intense.

The second factor operates within Western nations such as Australia. Although our mass media has almost universally promoted the ‘mainstream’ narrative on Syria, an increasingly sceptical populace now questions its war-promoting verities much more openly than before. The difference in popular scepticism – even between 2011 and 2012 – is marked. To be blunt, our mass media has told so many lies that the Matilda Effect is beginning to kick in.

Fortunately alternative voices are not entirely absent among western commentators — and include New Matilda in Australia and Global Research in Canada. They are however almost entirely excluded from our mass media, which is better regarded as a form of social control on issues such as these as opposed to a channel for free information flow.

I believe the most important thing we can each do is take the trouble to understand the truth as best we can — then express it without fear. Judging by history, ‘Masters of War’ don’t like operating in plain sight. They prefer to shield their nefarious efforts behind layers of deception. Exposure of the warmongers may well quench their enthusiasm.

Conflict over Syria and Iran – in the worst case scenario – could bring about World War Three and the collapse of human civilisation. Even under a less dramatic picture, these conflicts could plunge the world economy into a recession that would make 2008/9 seem like boom times. Think oil at $300+ dollars per barrel if the Strait of Hormuz is closed…

Though somewhat protected by the legal and institutional trappings of a (post 9/11) ‘security state’ in all Western nations, our tiny minority of well-connected war-mongers – bonded together by factional loyalty and a thirst for war-profits – must surely fear the potential wrath of an enraged populace?

The “99%” (or should we say 99.99%?) won’t be fooled forever. Once awakened, such a majority can’t be herded like cattle. Faced with the destruction of our way of life to advance objectives we don’t share, Westerners also may unite to strip power from criminals who’ve hijacked our society — making them wish they hadn’t pushed their luck too far.