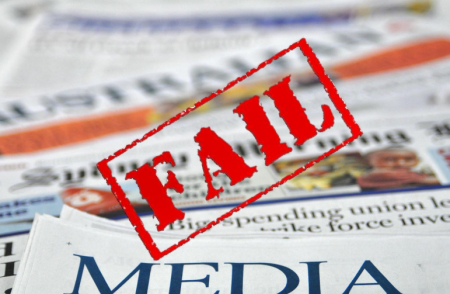 [Read the whole saga of Jacksonville on our dedicated page.]

ALTHOUGH things may seem quiet in the HSU and Jacksonville, with elections coming next month there is quite a bit of factional power play going on. A fine example was in The Australian yesterday.

The article I am speaking of was entitled 'HSU official who quit in disgust still being paid $15k a month' and was written by Ean Higgins.

It is so bad, it's depressing to think of anyone actually reading it.

The article is about a former divisional secretary of the HSU, Carol Glen, who left the HSU when the factional fighting finally became too much for her.

Carol did indeed complain to Fair Work Australia, as reported in the article. The copy of Carol Glen's below complaint was first published on Independent Australia and WixxyLeaks over a month ago. The complaint was in regards to threatening phone calls from FWA Vice President and Kathy Jackson's fiancé Michael Lawler trying to ensure she didn't resign. 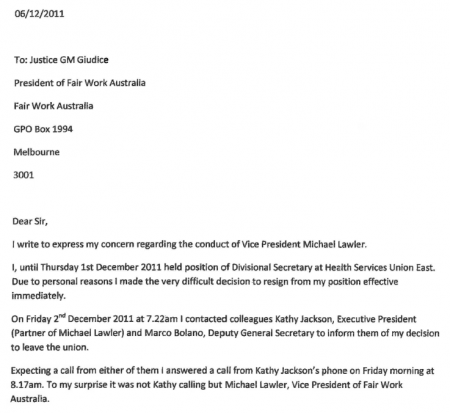 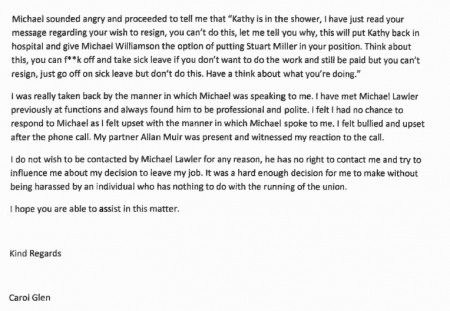 Lawler, who now says he was not involved in the Union's business, also reported Glen to the police for picking up a supposed payoff cheque. The cheque turned out to be a bond cheque she was collecting from the bank for a place that she was renting. Carol had apparently been foolish enough to refer to this cheque in an email to the bank. Carol reported that she had strong suspicions her emails had been hacked as she believed that is the only way Lawler could have known about the cheque.

Given this type of work environment, is it any wonder Carol wanted to leave?

Carol was given a package upon leaving that may seem extreme to most, it certainly does to me. This package is the basis of the Higgins story ― the continued salary of $185K a year.

In his story, Higgins talks of Glen's resignation and resignation package as if it was part of some factional power play from NSW ― to install a “Williamson Puppet” as he puts it.

Before we look at the “puppet” claim, let’s do something that Higgins seemingly forgot to do ― research. Unfortunately, not researching facts can lead to defamation, something Mr Higgins is apparently familiar with.

I am of the opinion that Carol’s resignation package is generous in the extreme, however the key question to ask to work out whether she was given special treatment would surely be: “was it unique?”

The opinion that Higgins seemingly relies upon is that of Kathy Jackson’s factional partner, union thug, and the man Higgins was seen giggling in the corner of the Federal Court with during Jackson’s recent appearances ― Marco Bolano.

Bolano had this to say, according to the Higgins story:


"It's extremely suspicious ― why would you conclude such an enormous settlement if she had resigned?"

What Bolano seemingly forgets, and what Higgins fails to find – or bother to look for – is that Carol Glen's package was based entirely on another official's package when they left. His name is Jamie Martorana. What is even more amazing, is that Bolano reportedly helped put together Martorana’s package of a year's full pay upon his leaving. And this package was originally put together by Kathy Jackson ― Bolano’s crony.

I guess, if like me and Higgins, and even Bolano, members think that this package is excessive ― then my advice would be not to vote for those associated with who put it together. That would mean not voting for Bolano, Hart, or Behrens.

Unlike Higgins, I had no problem getting hold of Carol Glen, and from my conversation, and previous conversations, I can safely say that she is in no way part of any factional campaign. This is a woman who still works in the health industry as she is passionate about helping others. Higgins is right, Carol left in disgust. But given the way someone as community minded as Carol is being dragged into the saga once again, maybe disgust is not a strong enough word ― maybe revulsion would be more appropriate.

She has fled the factional fighting once, can't these people just leave her alone?

The reason Carol’s name has popped up, as her package is nearly finalised, is so that Bolano can take a swipe at someone he is running against in the upcoming election. This would be the NSW faction's “preferred candidate” and so-called “Williamson puppet” Stuart Miller.

I guess it is fortunate that Higgins wrote his story, as it provides a chance for the truth to reach the membership and for them to become aware of the factional goings on behind the scenes. It also helps Stuart Miller in his campaign, I’m sure, as it is my understanding that the number of members that read these articles on Independent Australia and WixxyLeaks vastly exceeds the number of members who read The Australian.

For good measure, Higgins mentions at the end of the story that Michael Williamson “did not return calls”, seemingly to add a sense of conspiracy.

Higgins may have missed it when I broke the story here, or maybe he has been living in a cave for the last week or so, but Michael Williamson was charged recently with a number of offences relating to the HSU. One result of this is that, as part of his bail conditions, he is not allowed to discuss HSU matters with anybody but his lawyer and police; this would most definitely count Mr Higgins out.

Higgins may as well have included Barack Obama, The Pope, or the Queen as part of his conspiracy ― he would have had a greater chance of any of these people returning his call.

The public perception of The Australian over the last couple of years has been that of printed propaganda. I am also aware that this is something News Ltd is attempting to address. However, it is articles like this that encourage the perception.

In fact, I would suggest that stories like this go a step further to become factional printed propaganda.