The assault starts before you get through the front gates, with tickets priced far beyond the reach of many average Australians. To gain entry to a single park costs up to $90 per person, with the deceptively attractive 3 Park Super Pass priced at only $10 more. Naturally, families seeking good value will gravitate towards the multi-pass — a false economy of the highest order.

For a family of four (which I happen to be a member of) Super Pass tickets cost $400, which provides the potential to visit three commonly-owned theme parks for a period of six months. The main problem with this is that most people will only holiday on the Gold Coast for one week each year, which means to get any semblance of value you need to spend half your holiday standing in line with thousands (if not tens of thousands) of other holidaymakers.

This wouldn’t be such of an issue if the staff were well trained and motivated, however quite the opposite usually appears to be the case. During my family’s Sea World visit last week, I was treated to a mix of indifference, condescension and outright hostility — and that was just trying to buy a $10 hot dog! 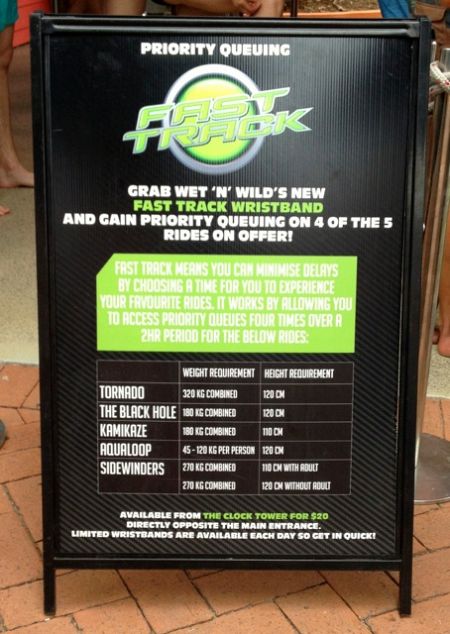 Another shocker is the concept of “fast tracking”, where patrons can pay more to skip the long lines.

Ignoring the fact that this leaves less wealthy patrons standing in line for even longer (at least an hour at Wet ‘n Wild GC), one has to wonder about the message that this is sending to the children of those families who can afford it — life will be easy, simply because you’re rich.

Wet ’n Wild is probably great if you’re a teenager with a mullet and crappy tattoos, but it’s not particularly family friendly. While the kiddie pools are fun (until someone gets squirted in the eye with a hose), there are about two ‘big slides’ that most under 12 can ride, with disturbing height and weight limits — one slide with a 2 hour wait has a height limit of 120cm but a weight limit of 45kg, which seems to encourage local kids to get as fat as possible so they can ride sooner.

It would be somewhat naïve to think that food would be reasonably priced at corporate owned fun factories, but is it too much to ask that the pricey snacks should be hot/fresh or at least edible?  Post-mix soft drinks are warm and flat, hamburgers taste like they have been cooked days prior and microwaved back to life and, if you want to eat at lunchtime, you have to make a move around 11.30am, at which point you’ll be deceptively close to the front of a ‘must ride’ line. Wet ‘n Wild do a serviceable basket of chips for $8.50, but their multi-stacked burgers once again reward gluttony.

Did I mention gouging?

In the last 12 months, there have been a number of high profile TV advertising and publicity campaigns driving traffic to the theme parks. At the same time, new rides and attractions such as Storm (1.5 to 2 hour line — watch the linked video and save some time) have been opened, the combination of which has resulted in a boom season for the corporations behind the Theme Parks.

As publically listed companies, the main aim of both Village Roadshow and Ardent is to make money. I can accept that. High profile TV campaigns and marketing are the traditional routes to this end, but one has to wonder how long the Theme Parks will continue to prosper in the face of poor customer experience, excessive prices and negative feedback (like this: “Fuck You, Sea World and Wet & Wild Gold Coast”).

Taking all of the above into account, my kids still love theme parks and we’ll probably be going back to DreamWorld next year … but that’s life, I suppose. 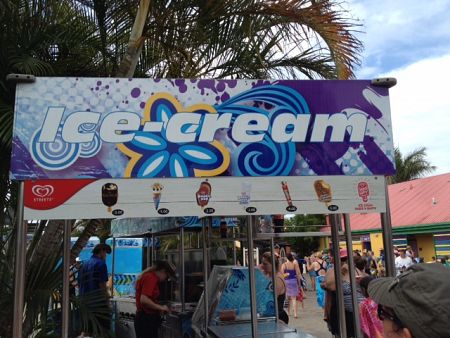