The Australian's Graham Lloyd pushes hard against the winds of change

The Australian newspaper – and its environment editor, Graham Lloyd, in particular – have a vendetta against wind power, says Dave Clarke, who reviews their latest unbalanced report. 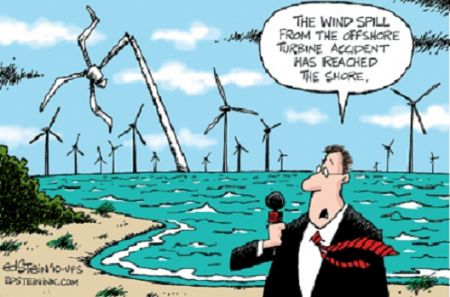 An environment editor who has a grudge against one of the world's most successful forms of renewable energy must be quite a rare bird. But for an employee of the Murdoch News empire it is probably a wise career choice. Opposing the huge and powerful fossil fuel/mining industry would not be good for Lloyd's future prospects in that system.

Lloyd relies heavily on what he calls Cumming's 'two year analysis of Victoria's wind farm development', but does not say where or how this analysis has been published, nor can I find it on the internet.

Energy demand rises and falls all the time. Some of this is regular and predictable, some depends on factors like the temperature, and then there are the surprises that come from breakdowns in generators, the transmission system or industry. Generation must at all times match power consumption — that is a simple necessity of the way any electrical system works. All of this pre-dated the wind farms. Why should we believe that the Victorian power system coped with these variations in the past, but is now incapable of coping with a much smaller level of variability in wind power generation, especially when that variability is predictable because wind speeds can be predicted?

While most of Lloyd's efforts were directed at Victoria, he also criticised South Australia's wind power, unsurprisingly not mentioning that, largely because of SA's wind power, one coal-fired power station had been entirely shut-down while the other would in future only run for six months each year. (See an article in Adelaide Now, 2012/04/18, by Miles Kemp and Cara Jenkin.)


"…even with the continued expansion of wind farms in South Australia, the Australian Energy Market Operator's figures show the abatement has risen to only about 4 per cent of the installed capacity."

We are expected to believe this, with SA's two coal-fired power stations shut down?

As a South Australian I can assure readers that our electricity price has not gone up by anywhere near as much as 25 cents/kWh, and in fact informed commentators involved in the energy industry have told us that most of the price rise that there has been was due to infrastructure costs.

Lloyd writes of an (unnamed) report being presented to The Netherlands Parliament claiming that wind farms will not abate the greenhouse gasses released in their construction "even across the total life of the wind farm". He does not mention, of course, the many other reports that have shown full abatement in about the first six months.


Lloyd's 'evidence' goes very much against the consensus

Lloyd prefers to accept Cumming's assertions that wind turbines are not abating greenhouse gasses to the findings of various consultants around the world, presumably because Cumming's figures agree with Lloyd's preconceptions.

Wind power abates greenhouse gasses in the UK, why should we believe Lloyd and Cumming's claims that, for some reason, it is not working in Australia. See Beyond the bluster: Why wind power is an effective technology by the UK Institute of Public Policy Research.

In July 2006 consulting firm McLennan Magasanik Associates Pty Ldt produced a report which, in effect, stated that greenhouse CO2 emissions would be reduced by about one tonne for every megawatt-hour of wind power generated.

(This story was originally published on Dave Clarke’s blog Ramblings and has been republished with permission. You can contact the author at daveclarkecb@yahoo.com.)