Ten reasons why most Australian MSM journalists are absolute shyte

Never before has Australia's political coverage been so poorly regarded by the public; Tom Orren says this reputation is well-deserved — and here he explains why.

TO THE JOURNALISTS of Australia’s mainstream media (MSM) — your job is serious.

It’s not some game or a way to get yourself an award. It’s about OUR futures. We really worry about removing the price on carbon. We really worry about not having a world-class NBN. There are hundreds of thousands of kids who need a better education. It’s too important for you to keep stuffing around with politics as if it’s a game of Jenga.

But why am I even saying this? You won’t listen and you won't change, will you? Because you all think you’re doing a great job, whereas, in reality, you have let us all down.

Why is this, you ask? 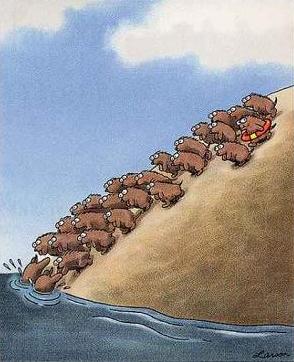 Reason 1 results in a well known psychological effect called "group-think", where a group of people who only ever talk to other, like-minded, people and actively avoid talking anyone who thinks otherwise tend to believe the same things. In fact, group members go out of their way to ostracise those who question those ideas. This results in continued reinforcement and exaggeration of the same ideas as they feed back and forth within the group.

You can see this in the way speculation about the ALP leadership, which has gone on for three years now, has reached frenzied levels without (yet) bearing fruit. It also happened with the BER and the Home Insulation schemes, which both had success rates well over 98% ‒ which would be the envy of the most efficient businesses ‒ yet now have the word ‘debacle’ indelibly etched alongside them because of unbalanced MSM reporting.

Reason 3: Journalists reward each other for rubbish stories

Laurie Oakes actually won a Walkley Award for printing Kevin Rudd’s malicious leaks about Julia Gillard in the lead up to the 2010 elections. Had it not been for those leaks sucking all the oxygen out of the ALP’s media time, we most probably would not have hung parliament today. Those leaks were not about actual policies — they were malicious and, therefore, did nothing to improve the quality of that pre-election debate.

Wouldn’t it be nice if journalists won awards for good policy analysis.

(By the way, some months ago, I wrote to the ABC asking them to confirm or deny whether Quentin Dempster had been the go-between in passing those leaks on to Oakes — the link being that both Oakes and Dempster were on the panel that awarded Oakes that Walkley and that Rudd and Dempster are old acquaintances from Queensland. It was neither confirmed nor denied.)

Reason 4: Australia's journalists are out of touch with reality

Julia Gillard’s ‘Misogyny Speech’ was hailed as a breakthrough for women’s rights all around the world. Right?

Wrong. For the first two days after it was made, the media of one country derided it as the ravings of mad woman.

Which country’s journalists? Australia’s, of course.

You’ll notice it also treated her more recent speech about women’s rights and abortion in the same way, despite recent moves by some on the conservative right to resurrect the issue. It has also re-emerged as an issue in several conservative American states — states not all that dissimilar from Queensland.

For the past three years, the MSM appears to have taken on a role as Kevin Rudd’s unpaid ‒ at least in money terms ‒ PR machine.

The single most blatant example of this came from ABC Four Corners, in the form of Andrew Fowler’s ‘The Comeback Kid’ report. The entire program was a walking billboard for Rudd that worked on the assumption that he would be leader of the country within weeks … that was almost 18 months ago.

Since then, Rudd has been on television more than Gillard, his every move being analysed in terms of a new leadership challenge. All I can say is either that he has called in a lot of favours or that the Murdoch Press is using him as a tool to degrade the efforts of the Government. The saddest thing about this is that it may yet work. (Time of writing 23/06/13).

MSM journalists have collectively allowed several visionary policy initiatives to be derailed by allowing the exaggerated claims of opponents ‒ most of whom have a vested interest in seeing them fail ‒ to take pride of place in the media.

The Mining Tax and the price on carbon are the most blatant examples, but another is Murdoch’s Foxtel, which has a vested interest in holding back the introduction of streamed TV via high speed broadband. You can add the Gonski Reforms into the mix as well. Yet the most well-worn phrase used to describe the ALP among most MSM journalists remains: “The Gillard government has no vision.”

Reason 7: The MSM no longer supports the disadvantaged

The MSM no longer supports the underdog, it now prefers to support the indefensible.

For example, at present, the 36% of students who attend private schools get close to 80% (or so) of Commonwealth Funding, and our MSM spends far more time defending the right of the private sector to maintain that inequity than in supporting the needs of the 64% majority who currently get about 20% of that funding. If it were the other way around and private school students were only getting 10% (or so) of Commonwealth funding, I can only imagine the MSM furore it would create.

Most MSM journalists are Communications graduates, which means ‒ as a general rule ‒ they prefer literature, drama, metaphor, intrigue and gossip. It also means that when they see a forest they don’t see trees; they see forces of evil lurking in dark shadows and themselves as heroes on a quest for truth.

In other words, where you and I see an egotistical little prick causing havoc, they see a blonde-haired hero fighting against a red-haired she-devil. Reason 8 also means that when most MSM journalists write about things like the economy or global warming, they haven’t a f***ing clue what they’re talking about. 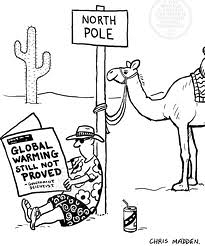 Reason 8 also reminds us that most MSM journalists are very opinionated people who were very good debaters at school (and right now I am desperately trying not to make a connection between the word ‘mass’ in ‘mass media’ and that word ‘debaters’).

To these people it’s all about the winning the contest and that means two things.

The first is that the truth is irrelevant. Debates are not scored on truth, because nobody could be bothered looking it up. They just make facts up as they need them.

Secondly, debaters are scored on presentation rather than content. This means that the cover is more important than the book and leads to comments like:

"Their message is resonating well with the public."

Translation: they’ve managed to get the public to believe what they say.

"They have a clear massage."

Translation: They repeat the same phrase over and over again until people think it must be true.

"They are cutting through.”

Translation: They’ve gotten the Murdoch press onside — regardless of whether what is being said is right or not.

The MSM has consistently failed to question the policies of the Opposition.

Until recently, the Coalition's ‘Tow-the-boats-back’ policy has not even rated a mention, even though Blind Freddy could see it wouldn’t work. Even now after the Indonesian Government has ruled it out, criticism is still only lukewarm. The inferiority of their ‘Fibre-to-the-Node’ policy has been similarly swept under the carpet.

As for the Greens, the impact of their opposition to a limited trial of the ‘Malaysia Solution’ has been all but ignored, even though it has meant more asylum seekers drowning and preventing other, more legitimate UN refugees, from gaining access to Australia.

Reason 11: They regard bad journalists as some of their greats

(I know, I know… but I couldn’t help myself.) People like Piers Akerman, Andrew Bolt, Alan Jones and Ray Hadley are considered amongst the best the MSM has to offer. You can only shake your head.

The saddest thing of all about the MSM is what it says about Australian business savvy. From a purely commercial point of view, it astounds me that no MSM outlet has recognised the potential market for providing objective political coverage.

Which is why you’re reading this on a non-MSM site now.