Rupert — my part in his (near) downfall

Lindsay Tuffin from the Tasmanian Times talks about his brush with the Murdoch media machine while working at the Hobart Mercury. 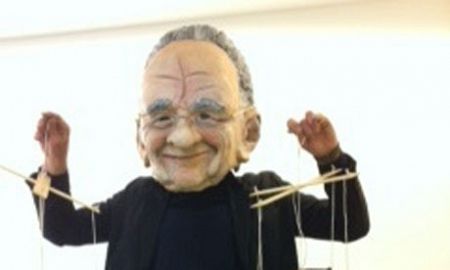 I do not wish to initiate accusations of Hitler-various-associative syndromes. This is meant to be partly humorous, though not as humorous as Spike (HERE).

But I do want to tell the Reader a little of my experience of being a tiny gnat on Rupert’s enormous arse.

I became associated with Rupert as the result of a terrible accident.

It was the takeover by Rupe of the Herald and Weekly Times ... it seems that in some of the collateral damage Rupe picked up the Hobart Mercury (probably completely unaware that he had done so), as it was some sort of subsidiary of HWT after another perhaps more fortunate accident (the sale of Davies Bros to HWT).

In those far–off days pre-HWT, and for a while later, it was an extraordinarily conservative journal, profoundly opposed to anything vaguely progressive, vehemently conservative and lary of anything conservationist — witness its refusal of even balanced reporting of the campaign to save Lake Pedder and later the Franklin.

One thing it did have going for it way back then was the traditional barrier between commercial and editorial. When I joined as a sub-editor in 1986 Andy Lohrey was still MD; and still retained that wonderfully old-fashioned idea that you almost had to seek permission to enter the Editorial Holy-of-Holies. Such was the very old-fashioned philosophy that there should be no perception of compromise between the money-making and editorial wings (a realist would say, of course there was ... it just wasn’t so bloody obvious).

How quickly that vanished when News Ltd in Sydney began to pay a little more attention to its wonderful Petty-Cash Cow in Hobart.

Soon the commercial and editorial worlds were united as one, as a succession of MDs trooped up the stairs for the afternoon meeting in the Editor’s office. They did not discuss the Journalists’ Code of Ethics.

And thus continued that retreat from a perhaps purer journalism and into the glorious world of marketing-platform journalism, in which the news part of the newspaper is subsidiary to the commercial imperative — too often simply the window dressing for the real business of making money.

Money is what the business of journalism is all about. And make no mistake. News Ltd will have its way with the future of Mercury. Although embarrassed by local resistance (beautifully described by The Fly, HERE) the homogenised News Ltd tabloid “product” is being increasingly centralised: sections done in Brisbane, Sydney, Melbourne or Adelaide and despatched eletronically to Hobart; subbing done by battery hen news hubs in bigger cities. Already the local subbing strength on some nights is down to one, with the rest done in Adelaide. Soon the Mercury shopfront presence in Macquarie St will be gone — or that’s my prediction.

I’m still amazed when I remember a Walkley Alliance Forum in Hobart about three years ago when the great minds of Tasmanian journalism gathered to discuss the future of news. In all that time there was much talk of business models and brand recognition, of “monetising the net” — “readers” didn’t get a look in (HERE).

The Wise Ones of Tasmanian media seemed to have forgotten – or perhaps never knew – that, in its original form, the Age of Grub Street (as Don Bentley so beautifully writes about, HERE) and the Pamphleteers there was no “business model” — just a passion for a truth, or letting people speak for themselves, or the dawning awareness that people could speak for themselves.

Commensurate with the development of meedja as business was the progressive reatreat into the “sexy” story over the ‘boring’ newsworthy story. A most recent example? Well, of course, it is more important to highlight the “sexy” story of drivers using Facebook to alert other drivers to speed cameras (HERE), than to lead with the newsworthy story that Tasmania will continue to resist New Zealand apples (HERE).

Or the bread and circuses of Geale ((HERE) over Gillard and Malaysia deals (HERE).

In Trickle-Down-From-Rupert Effect (that phenomenon in which Rupert Editors attempt to outdo each other in being More-Rupert-Than-Rupert and display the greatest loyalty [How to be a Murdoch Man, HERE] the sexy story progressively predominates. In Mercury-speak, that includes endless Princess Mary adulation and celebrity-snapping (just to prove even little Hobart is just like LA), cuddly dogs, crims in the dock and the front-page stocks, accidents, murder, chaos…whatever will titillate Mrs Three-Door Fridge in the ’burbs (also in newspaper target-group speak, called Mrs Stringbag).

In my two-decade time as a humble Rupert hack, I attempted, as a dissident non-team-player gnat (When Mercury was the one and only of Rupert’s newspaper empire to editorialise against the Iraq invasion, HERE), to resist this enculturation. It seemed absurd to me that a culture should be imposed on a city and a state — and Mercury progressively, in my jaundiced view, reflected Rupert culture rather than local culture. I’d look at the paper sometimes and think:

An imposed culture leads also to schizoid behaviour. For amidst the dross would be the gems — whether a Simon Bevilacqua investigative piece on climate change; arts precincts; forestry or the poison sins of the past; or a Sue Neales’ political analysis of substance; now the sometimes ascerbic wit of Leo Schofield.

So what was my part in Rupert’s (near) downfall? I suppose only the tiny bit of grit in the great machine, which eventually causes the chains to clatter; the tiny mouse to roar, for the gnat to dig his proboscis into the enormous arse and cause discomfit at least, at best, the encouragement for a bit truth to break out.

You do reap what you sow. Rupert slowly, inexorably is discovering – perhaps a little late – that the hardest thing of all in life is to face the truth about yourself…and your legacy.

(This story was originally published in the Tasmanian Times on 7 September 2011 and has been republished with full permission in a slightly abridged form.)