Rupert Murdoch’s odd denunciation of the Government's crackdown on 457 visas shows how utterly out of touch he is with Australia, says former News Ltd executive Rodney E. Lever. 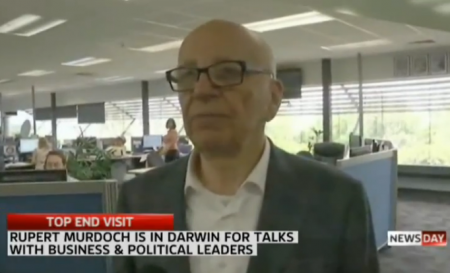 RUPERT MURDOCH'S chat with a young reporter at Darwin airport the other day was very revealing. I would hardly call it an interview; and it was too short to be a conversation. I don’t know who the reporter was.

What was revealing about it was that Rupert showed how out of touch he now is with his mother country.

The topic of  the chat, captured on video either by the ABC or the Darwin television station (of which I was the founding chairman in 1968), was the current headache of the Gillard Government’s efforts to limit the fraudulent use of the 457 visa.

This has been a problem for Labor from the time of the Hawke and Keating administrations. The Australian Labor Party sees one of its most important responsibilities is to Australian workers receiving adequate wages in preference to cheap foreign labour.

The problem was inherited from John Howard. Under pressure from big business, Howard, in 1996, introduced the Temporary Long Stay Visa. Until then formal migration procedures were the only legal means of obtaining permanent residency for workers from overseas.

But the technology explosion had made it hard to recruit trained people, and employers were impatient to join the boom.

Labor’s answer was 457 visas offering only temporary residency. The system is in trouble because it is allegedly being exploited to allow immigrant arrivals permanent residency, with insufficient evidence to support their claims and taking opportunities that should rightly be offered to Australian citizens.

When “boat people” arrive, with or without useful skills, they are immediately shunted off to the remote islands. But if you arrive by air, Charlie, or on a big, big, passenger boat, you’re in like Flynn.

So, Rupert Murdoch arrives in Australia – a man carrying two legal passports from two different countries – and announces, right in the middle of the mess, that Australia should have more immigration at the time when the country is embarrassed with hordes of arrivals in sinking boats.

When I first worked for Rupert in the 1950s, he was a hands-on employer. He knew everything that was going on. Lunches, dinners and round-table meetings with his executives and staff were on every day.

After the first decade, two or three companies became several, and then came the order that all chief executives had to provide Rupert with weekly reports, and these he carried around all the time in a big fat briefcase to read on a plane or sitting up in bed at night.

Then “several companies” became a giant international corporation, with so many individual entities that none of us could remember which were ours and which belonged to somebody else. Rupert sent me a book. It is called Up the Organisation. The author was a man named Robert Townsend, an American from Long Island, his business experience limited to a stint at American Express, and another at Avis Rent-a-Car.


'If your business is in Cleveland, start or acquire an operation in Santa Barbara at your peril. Absentee management is fatal.'

(How about that, Rupert?)


'All decisions should be made at the lowest possible level of the company. The Charge of the Light Brigade was ordered by an officer who wasn’t there.'

'Managers tend to make their biggest mistakes in things they’ve previously done best. Hubris is the sin of acting cocky when things are going well. Hubris is followed inexorably and inevitably by Nemesis.'

By the late 1970s News Corporation had thrown its tentacles around the world and I was in Brisbane writing weekly reports, always with my tongue in my cheek, because it seemed an absurd and time-wasting chore.

All the reports from around Australia were sent to Sydney where Rupert’s chief executive at the time was Ken May from the Adelaide News. It was Ken’s job to bundle all the reports into a summary and send them to Rupert in London or New York. Today, the operatic composer Kim Williams would be supervising this arduous responsibility (if it is still in practice).

Presumably there were hundreds of reports flooding onto Rupert’s desk every week. No one, not even he, could surely take them seriously. Ken May would ring me and tell me not to be funny, but I couldn’t help it. I think I wanted to be fired. There would be a good payout. But, in the end, I found a reason to resign after 20 years because I think they wanted to put me in jail.  I got no payout.