Married to the Murdoch mob: the media inquiry saga

The Government's announcement on the media inquiry is another victory for the Corporate News thugs who run the country these days, says JD Lang, who dramatically recreates the last few months of threats and wrangling. 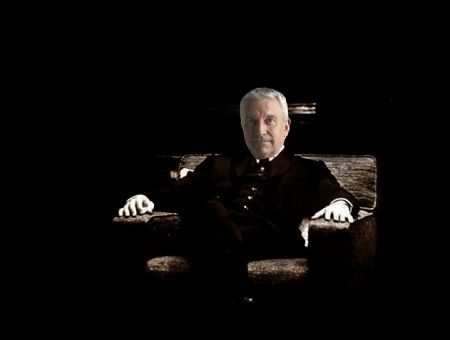 Yesterday, The Government finally announced an inquiry into Australia’s dodgy media. Though it sounded promising, and there was some rejoicing amongst a few gullible people, it was in the end, of course, yet another victory for the grey suited mobsters that run the media in this country, set Government policy and tell us who to vote for.

For months now, sinister revelations from the UK phone hacking scandal have shone a light on disgusting criminal activities sanctioned by Corporation News Executive mobsters in England. Hacking dead girl’s phones. Bullying, bribing and paying off policemen. Vendettas against non-compliant politicians, cosy arrangements with others. They paid off those who would take their shekel and denied all but the other most obvious allegations to try to abort the tide of resentment growing against them, but the truth slowly emerged anyway.

Meanwhile, last year’s Australian election delivered a rarity, a Government that Corp News didn’t select in their editorials. Worse, it delivered some power to a Party the company had previously vowed to “destroy at the ballot box”. The mobsters hated to lose in races they thought they’d fixed well. The campaign it had waged before against the Government, which toppled the previous Prime Minister, was replaced by an ever more relentless and savage campaign in which no lie or slur was too obvious or too distateful not to publish. On contract, out of control shock jocks urged open revolt against the Government and loathsome old crocodiles like Alan Jones openly advocated old school Mafiosi tactics against the Prime Minister — put her in a bag and make her swim with the fishes, he told anyone who would listen, which many did. Few complained.

Finally, Julia Gillard said that Corporation News had some questions to answer. The ensuing fury and disgust made the Corporation – that owns 70 per cent of Australia’s print media interests as well as a cable news network – turn into a News Godzilla. With eyes like burning coals, it climbed to the top of Centrepoint and began bellowing at the top of its lungs, swatting anyone that came too close. Every senior writer for The Australian, the Sun Herald and the Daily Telegraph was cattle-prodded forward by management to pour scorn on the merest suggestion that any improper practices could occur in Australia like those that happened in the UK. That there was any bias or manipulation of the news. In short that there was a need here for any sort of an inquiry into the media in Australia. What happened in Britain couldn’t possibly happen here, they cried! How dare anyone suggest we abuse our power, they screamed! It’s a meaningless political stunt, they bellowed! The worst Government in history has the audacity to blame us for their poor polling, they thundered! Freedom of speech!

And thereby they removed any slight lingering doubts they were out of control and prepared to abuse their power — that was now completely obvious.

Panic set in at domestic Corporation News entity, Limited News. Something must be done, burly executives told each other as they set off for their daily rounds of shakedowns. Who do they think’s running this show, they muttered, while politicians and other useful people cringingly accepted offers they simply couldn’t refuse. Throwing down a copy of the Melbourne Communist Party rag, The Age, the Limited News local boss John Hartigan buzzed his secretary. “Get that red [deleted] in here toots sweet,” he growled, “Tell her to come alone and be in the boardroom in 45 minutes…Yeah and tell her she better not be late, I’m [deleted] busy.”

The Prime Minister arrived 37 minutes later to a board room full of 12 dark suited men seated around a long teak table. Most glowered at her disapprovingly, some shook their heads, a few stared at the ceiling, pointedly refusing to make eye contact. The editor of The Australian, Chris Mitchell, sat with his fists clenched muttering incoherent obscenities, his crazed eyes frantically darting to every corner of the room, as if seeking more elusive enemies to crush. Seated in a deep leather chair at the head of the table, puffing a thick cigar from which wisps of white smoke curled lazily to the roof, The Boss stared at the wall a few metres to the right of Gillard and said nothing for several excruciating minutes. Finally, he put his cigar down and fixed Gillard with a gimlet eye. He spoke in curt deliberate sentences for 42 minutes. Scenarios were unveiled. Threats and promises declared. Gillard stood in a back corner and listened quietly. At the end she was told to leave. Which she did, head down, a fly buzzing in her ear.

Two weeks later, she announced that maybe a media Inquiry wasn’t so important. Especially not one that had anything to do with looking at the affairs of Corporation News. No-one outside the meeting was remotely surprised.

But then celebrity boxer Glenn Milne changed the tide of events when he decided to dust off from the archives a stock story that had been used by News Limited journalists since 1996 for the occasionally useful purpose of casting Julia Gillard as a criminal — or at least someone who had once slept with one. The standard procedure was to run they story on page one, wait for the inevitable complaint to the feared Press Council, which had its offices on the Corporation News building’s third floor, and then run a one line correction, on page 28 of the paper, four to six weeks later. Glenn Milne had used this story himself a few years earlier and, being something of an artist, was not content with merely rerunning his previous piece. He decided instead to freshen it up with some more incriminating details he had heard from some bloke at the pub – or perhaps had dreamed up in a drunken haze – he wasn’t sure which; either way, it was some good shit. He published in The Australian, cheered on by his loyal but vacant-headed side-kick, Andrew Blot.

For some reason, this hardened Gillard’s backbone for a time. She got angry. The boardroom humiliation was temporarily forgotten. Milne had gone too far, even for News. Stern words were uttered. The Australian withdrew the article from the online edition. An apology was issued! It was not enough, new calls for an Inquiry were heard and, this time, Gillard refused to shout them down. Milne stayed quiet. Blot scrawled in crayon all over the walls of his office, petulantly sulking.

The Boss sat in his top floor office looking darkly down at his domain, chewing the end of his cigar to mush. Was he worried? He needn’t have been.

Some weeks went by and then, yesterday, a media conference was held in Canberra.

The Communications Minister Stephen Conroy said that there would be an inquiry — an independent inquiry, indeed. It would be conducted by an elderly retired judge and someone who had once worked as a journalist, but not for a long time. It would have no power to demand anything or make anyone do anything they didn’t want to. It couldn’t subpoena. It would look at strengthening the Press Council, but certainly not media ownership or anything that might conceivably threaten the interests of the Murdoch mafiosi or break its iron grip over the country. Then it would report to a separate Inquiry, which would make it entirely certain any findings it made would be utterly ignored and left to gather dust on a shelf in an underground Canberra bunker.

The Greens looked pleased. Government backbenchers looked sheepish. The Opposition wailed that it was attack on free speech and quietly wondered what the fuss was all about. The Canberra press gallery looked up briefly and then got back to Tweeting catty comments about politicians' hairstyles. Corporation News executives laughed uproariously for an hour at least and then went to lunch and didn’t come back into the office until this morning, heads sore but happy. They then went right back to pushing people around and running the country like nothing had ever happened. The Prime Minister quietly explained to her cabinet that it never pays to mess with the family.

In an ivory tower, somewhere, an old man smiled.