Internet trolls: who are these people?

With everyone talking about abusive and offensive anonymous internet trolls, Victoria Rollison asks — just who are these people? 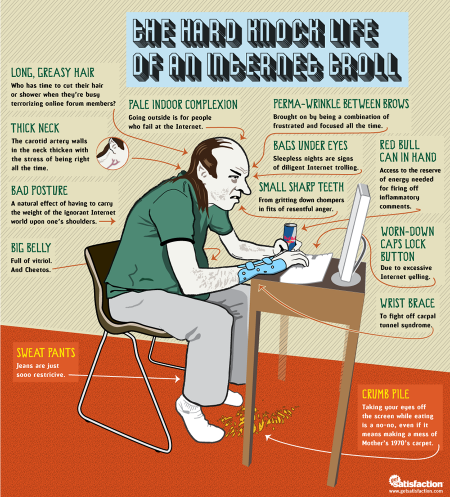 YOU COULDN'T open a paper, read a news site or listen to the radio last week without hearing someone talking about ‘Internet trolls’.

I don’t think it’s helpful to label people who are unpleasant on social media and online comment pages as ‘trolls’. The name seems to give them some sort of credibility, whilst also lessening their personal responsibility for their actions. As if they’re a movement. As if they’re acting a part – the nastiness isn’t really them – it’s just their troll ‘phase’ or a ‘persona’ they use anonymously online to sledge abuse at people.

Let’s just call them what they really are — sad, cruel, grumpy and often unhinged people. If you’ve ever Tweeted on the #auspol tag and haven’t been abused by the likes of @dotnetnoobie, you’re just not trying hard enough. I’ve become quite good at ignoring them.

But after this topic hit the headlines recently, it got me thinking — who are these people? We’re not talking about ‘Astroturfers’ or ‘sock puppets’ — who spread falsehoods on the internet and muck on behalf of some vested interest, or are set up by a computer bot and don’t actually exist. We’re talking about real people, at real computers, thinking up these vile statements and taking joy from the hurt they cause.

Just to recap — Charlotte Dawson was hospitalised after receiving a barrage of abuse on Twitter:

Julia Gillard has reported that she is regularly abused by ‘misogynists’ and ‘nut jobs’ on the Internet, including el supremo nut job himself – Larry Pickering. It’s been interesting to watch radio shock jocks and the Daily Telegraph jump into action to fight against abusive comments on Twitter after NRL star Robbie Farah spoke out about abuse he received about his mother’s death. As Jonathan Green pointed out, radio shock jocks and Murdoch press wading into this debate is a case of an abusive pot calling an equally abusive kettle black. I tend to agree with Tim Dunlop’s view that a lot of the horribleness on the internet is inspired by many of the most successful voices in mainstream media and politics. It was very telling that Robbie Farrah himself was reminded that those who live in glass houses best not throw stones after it was revealed that he suggested on Twitter that Gillard should be given a noose for her birthday. Charming stuff, Robbie. In an odd twist to this saga, comedian and writer Catherine Deveny reported that she had been visited by police after responding to a Tweet which could be construed as a threat to Campbell Newman. I’m assuming Robbie Farrah never received such a visit.

Last weekend, after it was announced that Julia Gillard’s father, John, had passed away, long-time advocate against vile behaviour on social media, @mikestutchbery, tweeted a collection of comments from Facebook directed at Gillard about her Father’s death, including:

I must admit, even as someone who has seen a lot of revolting behaviour on the Internet, these people revelling in the news of Gillard’s father’s death did shock and upset me. No matter what you think of a Prime Minister’s policy, or personality, how can these people possibly think that it’s ok to denigrate someone – anyone – because their father has died?

I was equally shocked and upset again the next day. As a lifelong and passionate member of the Port Adelaide Football Club, it was devastating to find out on Monday morning that one of our players had been killed in Las Vegas. In the hours between the announcement of the incident and the confirmation of the player’s name, my sister phoned me to share her horror at this Tweet she had found when looking for news on the incident:

It’s hard to understand how cruel someone must have to be to make fun of a person’s death.

I find it really unhelpful when people like Lauren Rosewarn suggest that the best way to deal with the problem of Internet bullies is to opt out of interaction on the web. And the advice to ‘not feed the trolls’ and to ‘block and report abuse’ is equally unhelpful. You don’t know someone has offended you until you’ve read something offensive. Sure, you can block them at that point, but my sister wasn’t following Milton Johnson in order to see this Tweet — it came up in a search result and she read it thinking it was newsworthy. If you visit the #auspol hash tag, you see everything people have Tweeted using this tag and trust me — it’s not pretty!

So back to my original question — who are these people? It didn’t take me long to find out a lot about Milton Bradley (@LordBromley). Here are a collection of his recent Tweets:

Milton Retweeted this from @AustProtParty, presumably in support:

I could go on but I’m sure you know all you need to about Milton from this sample. The scary thing about Milton is that he has 593 followers on Twitter. Alan Jones would be an irrelevant misogynist, racist, bigoted nut job if he had no listeners — the problem is that Jones has millions. And there are millions of Jones worshipping Miltons in our country. Scary but true.

To celebrate Milton’s 10,000th tweet, he posted a video on YouTube. I wouldn’t recommend watching it. Not because it’s offensive — it’s actually quite boring.

Milton reserves his spite and crudeness for his Twitter account, but doesn’t seem to be able to summon the energy to repeat this bile while looking down a camera. One noteworthy line from the video is:


"My main value is being PC free. Political correctness has no place in my Twitter platform. If I find a racist joke funny I’ll tell it. I don’t think any discussion is off limits."

This attitude is really at the heart of all ‘freedom of speech’ arguments that oppose any sort of regulation of internet behaviour or media standards. People like Milton, and Alan Jones, believe it is their right to offend anyone, anyhow they like and as long as they have a platform to do this. Whether it may be an individual’s social media account or a national radio show, they will push their offensiveness to the limits. No regard is given to the effect this has on people who inadvertently see or hear the hurtful remarks.

Now that I have identified who people like Milton Bradley are, next comes the question of their influence on our society. Sadly, it’s clear that Australia is following the path of the US Tea Party movement, with a subset of conservative political ideologues who have gone feral. Tony Abbott courts the support of this subset. Many of his most passionate supporters are nut jobs like Milton, Jones and Pickering. Has Abbott ever spoken out against the public abuse Gillard receives on a daily basis from his supporters? Has any conservative politician ever conceded that such a cohort of people are their most vocal constituency? When Abbott fronts an anti-carbon tax rally, doesn’t he support and encourage the people who hold up banners saying ‘ditch the witch?’

The coverage of Internet trolls has coincided with media analysis of David Marr’s reportage in The Monthly about Tony Abbott’s behaviour as a university student. Abbott, and mates Greg Sheridan and Gerald Henderson, flatly deny Barbara Ramjan’s accusation of bullying (punching walls and intimidation).  A friend of the woman, David Patch, has corroborated her story, which makes it much harder for Abbott to deny (though I’m sure he’ll still try).

In his opinion piece, Patch explains:


Although he (Abbott) was an active member of a fundamentalist political movement with a religious base (the DLP and the National Civic Council led by Bob Santamaria), it was his personally offensive behaviour which stood out. He was always (verbally) attacking gays and feminists and lefties. You certainly knew what he was against – the trouble was that you couldn’t figure out what he was in favour of!

Perhaps it’s not just that Abbott never condemns, and even encourages the behaviour of his supporters in their offensive campaigns that ignore every common standard of decency. Perhaps these two media stories are one in the same. Abbott doesn’t criticise the behaviour of his vile supporters, because he is one of these people. He and Milton Bradley are, perhaps, more similar than he would ever care to admit.