Politicians must not cave into the self-interested and ruthless blackmail being waged by the Murdoch-Rinehart Press against media reform, says Rodney E. Lever. 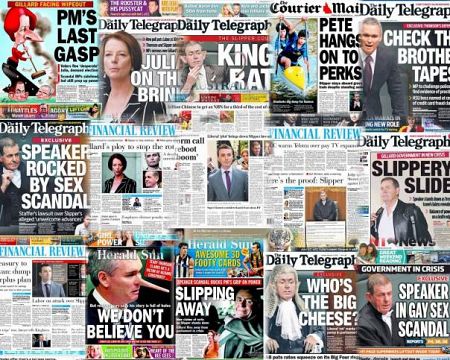 Prime Minister Gillard has never clearly and specifically explained publicly the urgency of the need for some form of  press regulation ahead of the Federal election just five months away, but this week the explanation indirectly came from the Member for Wentworth, Malcolm Turnbull.

It is recorded in Hansard as a question from Turnbull, who was teasing her to answer:


“My question is to the Prime Minister. If this week she is unable to persuade the parliament to establish a public interest media advocate to regulate the content of newspapers for the first time in our peacetime history, will she have the courage of her convictions and commit today to take that policy to the next election and pledge to legislate it if she were to win government again?”

In the past few weeks, the Murdoch and Rinehart papers have revealed their ruthlessness and their determination to destroy the Gillard  Government and place Tony Abbott and his ragtag Coalition in full control of our nation. The Labor Party faces the coming election with a powerful, unrestrained, monopolised media determined to destroy all the Government has already done and all it clearly intends to do.

All Australians know the country is in good shape and has all the signs of a prosperous future on its present course.

We now know beyond any doubt that the Murdoch-Rinehart press will go to any lengths to achieve their nefarious aims. Whoever leads the Government is far less important than the issues that drive its important policies. The events of the past week clearly reveal that good working conditions and economic management will maintain our future security, unless the powers that led us into those disastrous wars of the 20th century regain their influence.

On Tuesday, Murdoch’ s scruffy flagship (obscenely named The Australian) helped to let the cat out of the bag when it reported:


The implicit assumption that by getting these bills through this week it means the debate will calm down is completely wrong and a fundamental miscalculation. It gives every media company in the country the incentive to keep campaigning on it right up to the election, and will strengthen the resolve of all the media companies to keep campaigning to make sure that if the Liberals get into power they honor their promises.

The internet today is full of examples of newspaper dishonesty. One website doing a good job of this is Australians for Honest Politics, where journalists themselves reveal how the newspapers mislead and misinform us day after day.

An article about the carbon price debate, from the office of Greg Combet, is a particularly shocking example.

Appearances at the Senate Communications Committee this week by newspaper bosses demonstrate beyond any doubt that they do not see their publication as a public and have no interest in the public interest — only their own interests. If their excesses and dishonesty is not reined in now, than it may never be.