Gina Rinehart has revealed that she wants to use her substantial stakes in two leading Australian media companies to be able to promote the views of climate science deniers, says Graham Readfearn. 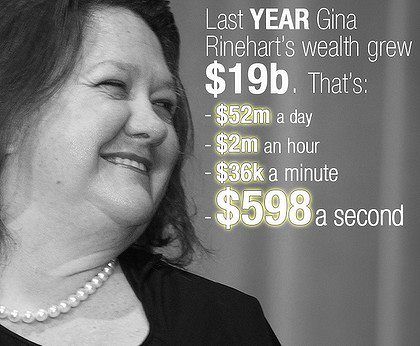 SHE is the richest woman on the planet with a personal fortune approaching $30 billion thanks to her coal and iron ore businesses.

But when it comes to arguably the planet’s most pressing problem – human-caused climate change – the Australian mining magnate Gina Rinehart dismisses out of hand not only the issue, but the expertise of the world’s climate science community.

Now, Rinehart, the head and owner of Hancock Prospecting, has revealed that she wants to use her substantial stakes in two leading Australian media companies to be able to promote the views of climate science deniers.

Her climate science denial did not appear in the broadcast, but the ABC did ask her about it and has released the answers to a series of questions on the issue of climate change and her promotion of climate scepticism.

The program comes as Rinehart is engaged in a very public fight with the board of Fairfax, the media company which owns the nation’s most respected newspapers the Sydney Morning Herald and The Age.

As reported by Fairfax, Rinehart told the ABC that she would consider selling her 18.7 per cent shareholding in the struggling company unless she is given three board seats and the right to influence editorial policy.

In a response to a question on climate change from Four Corners, a company spokesperson wrote:

‘To lessen the fear the media have caused over these issues, Mrs Rinehart suggests that the media should also permit to be published that climate change has been occurring naturally since the earth began, not just the views of the climate extremists. It is a fact that there have been ice ages, then periods of global warming to end the ice ages, for thousands of years, and these have occurred naturally, including due to the earth’s orbit, and not due to mankind at all.

‘Mrs Rinehart points out that some people received notoriety claiming only a few decades ago that the earth was about to enter an ice age and understands some of those same people are now claiming, global warming instead. Mrs Rinehart admires people like Ian Plimer who have independently chosen on their own accord to stand up against this tidal wave, which has caused fear, and despite substantial attacks by some of the media and extremists for so doing. It is noted Professor Plimer had his own views on climate change long before he knew Mrs Rinehart and had given many such informative speaking tours prior to meeting Mrs Rinehart.’

So, who is informing Rinehart’s misinformed view on the science of human-caused climate change? Certainly, on her climate science speed-dial would be Professor Plimer — the geologist, mining company director and author of two climate sceptic books, the latests of which targets school children. The Australian Government’s Department of Climate Change and Energy Efficiency recently published a lengthy analysis of the book, which it described as “misleading” and “inaccurate”. Plimer is also on the boards of two of Rinehart’s mining companies.

As I reported in Crikey, in July 2010, Rinehart hosted a high-powered lunch at her Perth home in Western Australia and invited the state’s Premier Colin Barnett, the state’s environment minister Bill Marmion, the Chinese Ambassador to Australia Chen Yuming and a former prime minister of Japan. As the guests nestled in their seats for lunch, Rinehart handed the speakers microphone over to Professor Plimer.

Describing him in her speech as “one of the leading sources of reasoned and factual information in Australia on global warming and climate change”, she didn’t mention that Professor Plimer has never published a single peer-reviewed paper on human-caused climate change.

The activist Lord Christopher Monckton is Rinehart’s other favourite denier of the risks of human-caused climate change. In 2012, she co-sponsored his Australian speaking tour and offered a member of her staff to co-ordinate the Perth leg of the tour. In 2011, she invited Lord Monckton back to deliver a lecture at the beginning of another Australia-wide speaking tour.

Australia’s most prominent climate “sceptic” is News Ltd columnist Andrew Bolt, who also has his own shown on Channel Ten where Rinehart has a seat on the board and 10 per cent of the company’s shares (a shareholding she has recently increased).

When asked by the ABC if she had played a role in securing the show for Bolt, her company dodged the question, stating only that “Mrs Rinehart hopes that should Mr Bolt’s time permit, that he would consider longer programmes on Channel 10″. Andrew Bolt was one of the media personalities who Lord Monckton has suggested could be given more air-time if the “super rich” could be encouraged to buy into the media.

Close observers of Rinehart will know that her debunked views on climate science are not new. In a column that appeared in the May 2011 issue of Australian Resources and Investments Magazine, Rinehart wrote about her opposition to Australia’s carbon price legislation and a proposed tax on mining profits — both of which have now been passed into law. She wrote she was “proud” of Australians who were “not swayed by the global warming fear campaign”.

‘Remember when the mainstream media was running frightening commentary about carbon-induced global warming? We read and heard about how oceans would rise, flooding our homes, and how, over years, we’d be scorched due to the increasing heat.

‘Have you noticed that we don’t hear much any more about global warming? The theme has now changed to carbon-dioxide induced “climate change”.’

‘Let’s consider climate change – the world has constantly changed climate and will continue to do so. Even before human civilisation, the world went through ice ages and periods of global warming.

‘There will always be changes that affect our climate, even if we close down all thermal-fired power stations, steel mills and other manufacturing operations, putting employees out of work and drastically changing our way of life. Furthermore, there will always be geothermal activity that spew out heat and ash and this activity does affect the climate.

‘I am yet to hear scientific evidence to satisfy me that if the very, very small amount of carbon dioxide in the atmosphere (approximately 0.38 per cent) was increased, it could lead to significant global warming.

‘I have never met a geologist or leading scientist who believes adding more carbon dioxide to the atmosphere will have any significant effect on climate change, especially not from a relatively small country like Australia. I have, however, had the benefit of listening to leading scientists and reading their work.’

The ABC also asked Rinehart if she had been funding campaigns against the country’s carbon legislation and mining tax reforms. She didn’t answer the question, but there are clues to where her money is going.

At the end of her article for the mining magazine last year, she asked for anyone who shared her “vision” for an Australia without a price on carbon and with climate science deniers leading the debate, to contact John Roskam, the executive director of the Australian free market think-tank the Institute for Public Affairs.

The IPA, a leading promoter of climate science denial in Australia, refuses to name its funders but is currently in partnership with Rinehart’s lobby group Australians for Northern Development and Economic Vision to push for lower mining taxes and low regulation in the country’s north to promote mining projects.

Adele Ferguson, a senior business reporter and columnist for The Age, has told Fairfax that Rinehart believes most journalists are “card-carrying communists”.

Ferguson, whose unauthorised biography of Rinehart goes on sale in Australia this week, says the West Australian mining magnate is trying to buy Fairfax because she viewed it as a “left wing” organisation and she wants to change it.

Earlier this week, the Fairfax board said in a statement it wouldn’t be offering Rinehart any board seats because wouldn’t sign the company’s charter of editorial independence. She has yet to respond.

If Rinehart’s takeover bid for Fairfax is successful, then the Australian media landscape risks becoming and even more welcoming haven of climate change anti-science.

(A version of this post originally appeared on DeSmogBlog. You can read more by Graham Readfearn at Readfearn.com.)