The Australian nuclear industry feels the heat after the Fukushima calamity, but spins on gamely. Noel Wauchope reports. 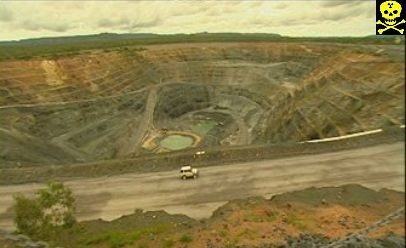 With plummeting uranium prices, and increasingly bad news about Fukushima radiation, Australia's uranium industry is well and truly on the back foot. But the industry battles on with religious fervour in its belief in the future uranium boom.

The Australian Uranium Association has put out a four page *promotional brochure,  which illustrates the anxiety that underlies that belief.  Indeed the second half of the brochure is almost a plea to the industry to be extra careful, and a prediction of

"…an extended period of uncertainty.....A mistake by one operator or explorer or project developer in our industry affects all of us."

The first two pages of the brochure put pro-nuclear arguments that are predictably full of self-serving half-truths and lies.

The brochure goes on at length about security and transport of uranium before a long and rather cloudy section on water — making a very dubious case that the uranium industry is not water intensive.

In the final section, Rob Atkinson, Australian Uranium Association Chairman and CEO of Energy Resources of Australia, spells out the anxieties for the nuclear industry.  Having expressed his “firm belief" that nuclear power is going to be "absolutely essential" for many countries, Atkinson goes on to say:

“…events at Fukushima at the very least look certain to complicate planning for nuclear expansion for the coming years in all countries that have been looking either to expand existing nuclear programs or commence new ones".

Despite Rob Atkinson's faith in the future of the nuclear industry – and despite his repeated promises of the nuclear industry's high standards of safety, responsibility, stewardship – this latest promotional treatise from the AUA does nothing to inspire confidence in the future of Australia's uranium industry. Instead it raises the question of whether it can be trusted to provide the full picture of the real and alarming risks and dangers their industry poses to all our children’s futures.