Oh Mr Jones! May I quote my 3 year-old granddaughter who, on being told of your latest remark yesterday, solemnly said:


'Nanna, why does he say silly things?'

This is my letter to you Mr Jones — on behalf of my granddaughters:

I am finding it incredibly difficult to write this letter to you; not, I hasten to add, because I don’t know what to say, but simply because my fingers are laughing at you. Yes — laughing.

Mr Jones, I know that fingers don’t normally laugh or write blog posts independent of the mind they’re attached to — but mine DO. They’re utterly ill-disciplined, wilful, spoilt-brat-disgraceful digits trying to make me write all sorts of truthful but unwise-to-say things about you.

There! Fingers and urges under control now.

Would that you could do the same with your tongue.

“Women are ‘destroying the joint’” are they, Alan?  Wow! You’ve got us all on edge now, haven’t you? We’re all getting ourselves into a rage because of you, aren’t we? 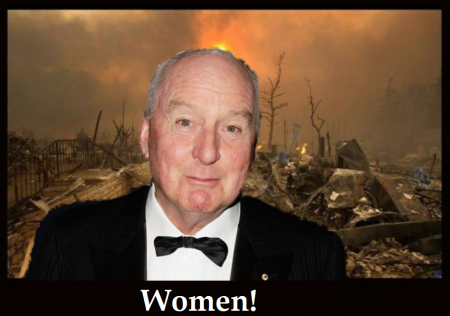 We’re laughing at you. Yes — laughing.

And my two granddaughters – aged 3 years and 19 months – are laughing hardest.

They’re laughing, Alan, because they are hell-bent on doing exactly as you say. They are going to ‘destroy the joint’, alright, and they’re going to tell you how.

But, first of all – because you write/rage/ogle or simper with no thought or reason other than to attract attention (that no one on this planet would otherwise give you) – let us define our terms:

When we emerge from a mother’s womb, Alan, (distasteful enough subject, eh?, well there’s worse to come) we arrive not with a tail between our legs, but one of two options:


Now, given that you are prone to openings of any sort other than human female ones – the posher the better - it seems surprising that you so favour the dangly bits. But favour them you do.

My granddaughters do not have dangly bits and therefore they are behind your eight ball even before they (heaven forbid!) meet you.

While it can mean any manner of things in our marvellous vernacular from weed to home sweet home, ‘the joint’ as you see it, Alan, is this great country of ours called Australia.

The fact is that Australia was, first and foremost, occupied by men, women, tribes and families — but that’s incidental to you, isn’t it Alan? The important thing is that it was discovered by men, taken by men, manipulated by men, ruled over by men — men firing from the hip and the penis until everything and  everybody yelled ‘Submission!’ and the place started to look, feel and sound like a ‘joint’.

Good people over the years have tried to address those injustices, Alan, and many have contributed much to ensure that this could be seen potentially as a beautiful country — not a joint.

But you’ve done your best to make sure that it stays a ‘joint’, haven’t you Alan? For years, with your bigotry, misogyny, sexist rants and bile you have coloured the airwaves blue with stupefyingly successful shock-jock results — turning people against people, group against group. With the help of your like-minded shock-jock and political bros you have maintained this 'joint’ image — a fearful, selfish, mean-minded, greedy country that cannot abide women, asylum-seekers, people with disabilities or our Indigenous brothers and sisters, to name but a few. 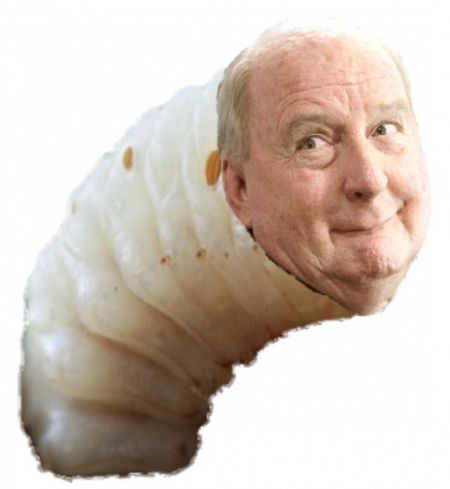 And now what? Women are daring to rise up, take some of that power away from those with the dangly bits in order to equalise the equation — and you’re frightened. Yes, you’re snivellingly, crawlingly, frightened that these creatures with openings dare to show what they can do. They dare to lift that skirt, put down that pail, have a drink if they want to and defy mens’ gaol.

My granddaughters know they’re as good as the boy or girl next to them in the kindergarten or playgroup.

They know that they will be encouraged to be ‘who they are’, to their maximum potential because the women who went before them made damn sure that they would.

But they also know, Alan, that they cannot do it alone. They know that if we are to make this “joint” into a modern, civilized, healthy and equal opportunity country, men and women must work together. Men and women must mutually respect one another and their individual strengths.

Enough of your bleatings, Alan Jones. Our granddaughters and grandsons will work together. You – and  'The Joint' – are passé.

(This piece was originally published on Nancy Cato's blog NancyRants and has been republished with permission.)