Today, two journalists who exposed Reserve Bank corruption will be forced into court to try to make them reveal their sources. Tess Lawrence comments. 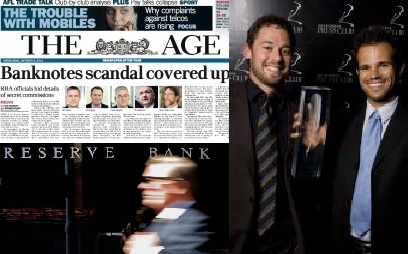 I AM RICHARD BAKER AND NICK MCKENZIE

TODAY (Monday, 4 February 2013), in the County Court of Victoria, a legal gun will be held to the head of journalists.

Forced before the Court to reveal the identity of a source will be Australia's hottest and most prolific two man investigative team, Walkley Award winners Nick McKenzie and Richard Baker of The Age. They are journalistic gamechangers.

They do what ASIS can't or won't do.

They do what ASIO can't or won't do.

They do what the Australian Federal Police can't or won't do.

They do what State police can't or won't do.

They do what Customs Police can't or won't do.

They do what ASIC and other regulatory bodies can't or won't do.

They do what politicians can't or won't do.

They do what anti-corruption bodies can't or won't do.

They write what other media can't or won't write or publish or even acknowledge.

And, among other things, they write what the Reserve Bank of Australia doesn't want us to know about. Corruption. Dirty money.

I have great respect for McKenzie and Baker, and not just because Richard Baker was my student when I taught Ethics and News Reporting at Deakin University. I make no claim whatsoever on his formidable talents.

My students invariably teach me more than I teach them.

I believe journalism is a vocation and it is the nearest thing to religion that I know.

One of the more sacred Commandments of Journalism, is that of protecting our sources.

Even if such protection for sources was not enshrined and sanctioned in our Code of Ethics, most of us would instinctively do this.


Aim to attribute information to its source.  Where a source seeks anonymity, do not agree without first considering the source's motives and any alternative attributable source. Where confidences are accepted,respect them in all circumstances.

Shooting the messenger is still a favourite pastime of despotic regimes and corporate institutions and their lawyers, who use various types of silencers on their weaponry, aimed at those who light even a candle to disturb the dark of corruption.

Messengers great and small have to somehow be able to withstand the ill winds sent to extinguish that goodly light, and to cup that fragile flame with bare hands to protect it.

Two hundred and sixty-two years ago next week, in a speech relating to agriculture in the House of Commons on February 11, 1851, Benjamin Disraeli uttered a favourite touchstone quote:

Disraeli was a staunch and fearless defender of a free press, despite the fact that so often he was glassed by the media and the British establishment for his Jewishness.

Six years earlier, in a speech at the 1845 Printing Trade Festival, he told the assembled workers,


“The press is not only free, it is powerful. That power is ours. It is the proudest that man can enjoy. It was not granted by monarchs, it was not gained for us by aristocracies ; but it sprang from the people, and, with an immortal instinct, it has always worked for the people.”

On September 17 last year, in Independent Australia, under the headline 'Dirty Money and the RBA', I wrote that the grotesquery of corruption within our banking systems seems endless, with vaultlines leading to the Reserve Bank of Australia.

'The corporate sanctioned muck of fraud, bribery, collusion, mutual scrotum and back scratching could not exist without corrupt bedfellows in the national executive elite.

It could not flourish without the rich and powerful and those who aspire to be like them, or without the various regulatory and policing bodies, institutions, the judiciary, the legal system, state and federal governments and people who are prepared to lie before they buy and sell silence — such are their shares and stock in trade.

I referred to a September 15, 2012 expose by Richard Baker, Nick McKenzie and Maris Beck on the disgraceful and dismal performance of ASIC:


On Saturday, Australians wake up to yet more explosive revelations in Fairfax publications that, in an ongoing saga, compounds all and more of the above:

The Australian Securities and Investments Commission announced in March that it would not act on a federal police referral to investigate the RBA bank note scandal, despite the AFP and government lawyers finding compelling grounds to do so.

The Saturday Age can reveal that so strong is the evidence of possible corporate malfeasance that prior to referring the matter to ASIC, the federal police considered taking the rare step of getting a special delegation from the Gillard government to investigate corporate law offences.

ASIC’s failure to conduct the most basic of investigations into the matter has not only infuriated senior law enforcement sources in Canberra, but left a major part of Australia’s worst corporate corruption scandal untouched. It has also sparked questions about whether the intense political sensitivities that could flow from a probe that ensnared top serving and former RBA officials has influenced ASIC’s conduct.

It is a ploy of fraudsters, banks and their lawyers and police and others included, to deliberately do the following: misspell a name, incorrectly date a letter, incorrectly address a letter, delay service, fabricate service — as I can attest in my own experiences with the National Australia Bank.

The article … is the latest in an outstanding and ongoing investigation that even in its early days should have prompted an immediate response from our government and the authorities — and the mainstream media.

Last year, [2011] with a two-part article published in The Age on August 11 entitled ‘RBA held evidence of bribery / Who knew what when’, Baker and McKenzie won a Walkley Award for their painstaking work.

On the same night, Wikileaks founder Julian Assange also won a Walkley for the most outstanding services to journalism.

He was in good company.

In my article I acknowledged the fine work by Baker and McKenzie and their paper:


Baker and McKenzie have led this forensic investigation and both they and The Age are to be congratulated not only for their services to journalism, but also because of their services to the Australian people.

They have done what the Board of the Reserve Bank, the Government, the police and ASIC have all failed to do, have refused to do and that is, to investigate and act on the matter.

But where is everyone? Where are our political guardians? And I don’t mean just for today?

Where were they months and years ago, when Baker and McKenzie first held a Securency note to the light to see if it was fair dinkum?

The Age quotes Independent Senator Nick Xenophon as questioning "the extent ASIC has been blindsided by the fact that these allegations involve subsidiaries of the Reserve Bank”.

"It seems extraordinary that given the seriousness of these allegations and what is at stake here, that not one relevant witness has been interviewed by ASIC,” Senator Xenophon said. "This is serious enough to warrant a special taskforce from ASIC.”

Well, I reckon you’re on the money, Senator.

But where was Prime Minister Gillard? (Without question I am not referring here to her private sadness and absence from the public stage. Like millions, I empathise so very much with her at this yuck time and wish her and her family great strength and have only kind thoughts, my condolences and no platitudes)

Where was Attorney General Nicola Roxon?

Where is Foreign Minister Bob Carr?

Where was former Greens Leader Bob Brown and where is Christine Milne?

Where is the Leader of the Coalition Tony Abbott? He should be punching the lights out of the Reserve Bank of Australia and ASIC — metaphorically of course.

Where is Bob Carr’s jealous rival for the top job? Julia Gillard only has to lose one more shoe (two so far) and he’s hoping he’ll be a shoe-in. We’re talking globe-winning treasurer here, Wayne Swan.

Where’s the Commissioner of the Australian Federal Police, Tony Negus?

Well, there you go girls and boys, I’ve given you the starter pack for Reserve Bank of Australia Investigation 101. Now go forth and multiply, as I tell my students.

Oh, and I think I’ve spelled the names correctly.

But I know what you’re thinking. That I haven’t mentioned the Chief of the Reserve Bank of Australia himself, Glenn Stevens.

The fact is, the disgraceful and entrenched misconduct of some sections of the RBA were done in the name of the Australian people. Once again, we have been ill-served.

The moral and political cowardice of ASIC is offensive in the extreme. Who do we turn to when our corporate watchdog appears to have been debarked.

What I want to know is, whose is the tail that wags the watchdog?'

Another complication in this Court case involving Age journalists arises out of corporate boardroom incest and perceived conflicts of interest.

The Age is owned by Fairfax Media Ltd and its chairman is Roger Corbett. But Corbett also continues to hold not one but two positions with the Reserve Bank. As well as being the RBA Chairman of the Remuneration Committee he is also a member of the Reserve Bank Board Audit Committee.

On Friday, Louise Connor, the Branch Secretary (Victoria) of the Media Alliance sent out a rally call for journalists to gather in support of Baker and McKenzie and the protection of  journalists' confidential sources, at 9.30 am in the forecourt of the County Court of Victoria on the corner of William and Lonsdale Streets:


Both journalists are members in good standing of the Media Alliance and are therefore bound by the Journalist Code of Ethics to respect their confidential source’s anonymity “in all circumstances”.

The pair have won Walkleys for their investigative reports into alleged bribery at the Reserve Bank banknote subsidiary Securency. The case before the court relates to former banknote executives accused of bribery.

This latest assault on press freedom echoes the 2005 case involving Herald Sun journalists Michael Harvey and Gerard McManus who, as Media Alliance members bound by the Code, refused to reveal a source and were subsequently convicted of contempt of court and fined $7,000. Subsequently, shield laws introduced at a Federal level and now being rolled out across the states to ensure journalists will never again be convicted for doing their job ethically and responsibly.

The Media Alliance calls on all Victorian journalists to rally in support of our colleagues and to protest this latest attack on press freedom.

I'm with Disraeli on this one, and I'm with my journalist brothers too.

I am Nick McKenzie and Richard Baker.

I would hope we all are, on this dangerous assault on truth and justice, journalists, sources, informants, whistleblowers and freedom of the press – and our obligation and ability to place such information where it rightly belongs – before the people.

Justice is indeed truth in action. But both appear to be estranged, of late.

* Tess Lawrence served two terms as elected President of the Freelance Section (Victoria) of the then AJA (Australian Journalists Association).