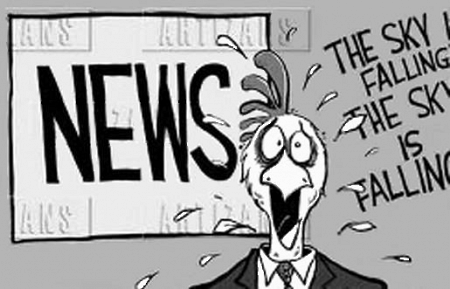 Journalists are a curious bunch. Priding themselves as professional sceptics and reflexively cynical about those who pursue grubby advantage under the borrowed banner of universal morality, they nevertheless are incurably romantic about their own craft.

Indeed, for those of us who have sat through the debate over the recent Bolt judgement, in which Australia's most popular and most powerful tabloid columnist was found to have breached the Racial Discrimination Act, it has been impossible to follow proceedings for all the people in the front rows suddenly standing on principle.

Even normally practical and respected media observers – like Media Watch's Jonathan Holmes – have gone all Thomas Jefferson on us, seeing in Justice Bromberg's eminently sensible and balanced ruling the portent of McCarthyism - as aggrieved sections of the community hide behind the courts to shut down healthy public debate on important issues and silence truth tellers.

Strangely, Holmes and other journalistic opponents of the Bolt ruling find themselves on the same side as the IPA crowd whose public urgings for the preservation of "freedom" usually bear a strong correlation to the pecuniary interests of their undeclared funders in the mining, tobacco and business lobbies.

It's not my intention here to contribute to the fine and high-minded debate about Enlightenment principles and legal precedents, but like Mark Bahnisch I find it interesting that many of those at the front of the queue loudly proclaiming the virtues of freedom of speech (which has never been absolute in any case) are nowhere to be seen when powerful figures routinely use the courts and their own deep pockets to stifle media scrutiny.

The irony is that some of the greatest suppressors of a free media are the press barons themselves. The late Kerry Packer was an enthusiastic litigant and once went after Jonathon Holmes' alma mater Four Corners over a 1997 investigation into casino licensing. And from my own professional experience, lawyers for Rupert Murdoch himself – the great champion of a free media – threatened his partly owned AAP in the early 1990s over a well-researched piece by its media writer about News Corp's near insolvency at that time.

I don't recall journalists getting on their high horses in those cases when the Big End rode into town. And I certainly don't recall those Fair Weather Friends of Freedom that signed the IPA petition fighting on the barricades when such characters as Piers Akerman or Col Allan went after other media outlets seeking to scrutinise their activity. In many of these cases, litigation is entered into not to seek a judgement, but merely to gag the media in the courts until an issue dies down. (See Stephen Mayne's great wrap-up of several notable defamation suits involving powerful figures over recent years.)

Yes, freedom of speech and a free press are critical to democracy. But I find it hard to rally around the freedom flag when so many are silent in the face of journalism that uses spin and distortion and outright lies in aid of an agenda to smear the least advantaged and most voiceless in our community; of journalism that champions freedom without reference to relative power relationships.

The fact is, journalists' freedoms are there to underpin their first and most important responsibility – to the truth. It is the truth that they are defending. For that, they can earn the trust of their readers and develop a moral strength that acts as a bulwark against tyranny. But calls for freedom ring hollow when the truth comes second.

(Mr Denmore, a journalist for 26 years, is the editor of Failed Estate, where this piece was originally published on October 11, 2011. It has been republished with permission.)