Freedom of speech does not include the right to fabricate arguments to attack people about their race, says JD Lang.

There have been a lot of words written over the last day or so about some mythical right we apparently once had in Australia to maliciously create "facts" so as to racially vilify our enemies.

It’s called "Freedom of Speech", so they say.

I even heard Lex Lasry QC, a prominent jurist, say on the ABC that this right was "Constitutionally protected" in the USA. And he said it like it was meant to make us think we were going down the wrong path!

Newsflash to Lex — that is not the standard Australians usually hold ourselves to. I mean, freedom? America? Maybe you were looking the other way during the Iraq War and the search for the WMDs that were never there. And then Guantanamo Bay and the waterboarding and other torture. Not to mention the Patriot Act and the loss of civil rights. Mind you, Lex, you can't be blamed for not hearing about the police repression against the protesters at Wall Street this week, because the American corporate media didn't bother reporting it! So much for "Freedom of Speech" and your vaunted Amercian constitutional protections. Give us a break — they're nothing more than a mummers farce.

Back in the real world, Australia doesn’t even have a Human Rights law.

Ironically, the sort of people who are complaining about the judgement against Andrew Bolt – who are worrying and griping, quite disingenuously, about “Freedom of Speech” – are just the same people who rail against people suggesting Australia should have a Charter of Rights. These right-wing (so-called) “Libertarian” commentators say that having a human rights law would mean we would end up with a Government by the judiciary!

Well, here’s another newsflash, Mordy Bromberg is part of the judiciary and he made a sensible and considered Supreme Court ruling under the Racial Discrimination Act.

Just like his mates in the IPA and mining lobby and their fully paid for cash for comment "think tank", the Bennelong Society, hate Aboriginals — because the original dispossessed owners of this land, and their potential land rights, stand in the way of the rapacious miners and their ideological cheer squad turning all of Australia into a gigantic quarry. They are a financial liability, you see.

They aren’t worried about Freedom of Speech — they just don’t like losing ground in their quest to dominate and subjugate the Australian people — and sell our soil to China.

The truth is, the Racial Discrimination Act exists for a reason. It's so bigots like Andrew Bolt can’t, in bad faith, belittle and denigrate people according to their race – which is exactly, and ever so precisely, just what he did.

In fact, if you’ve read Justice Bromberg’s sensible judgement – which most of Bolt’s bedfellows obviously haven’t – you would know that if Bolt had made his statements without relying on false information, he probably would have got away with his disgusting and contemptible low-down slurs. It was, rather, the fact he created fictional details to support his argument that led to his downfall. 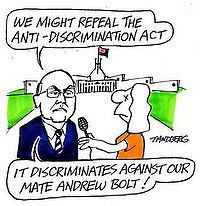 Meanwhile, Bolt came out yesterday and wrote a front page article decrying the loss of his “freedom of speech” — making all the same revolting arguments he made in his original article — but this time without including the “facts” he previously used to support his arguments.

So much for gagging Bolt.

Frankly, if you support the right of people to speak crap and make things up to denigrate and belittle people according to their race — you aren’t interested in freedom of speech. You are interested in the freedom of evil ideologues to tear holes into the fabric of our society – to start little wars – to deem some people superior to others.

Andrew Bolt is no victim — he is an ideological warrior who will stop at nothing to get his odious politics out into the mainstream so as to weaken our society and turn good Australians against each other.

The truth is, most things should be able to be said — but it is better that a some things should not. In Germany (and several other European nations) they don’t allow people to deny the Holocaust. I believe that is a good thing.

In Australia, we stop people from openly – and in bad faith – discriminating and vilifying other people according to race. Like the Germans and the Holocaust, Australia has form when it comes to race — think 'White Australia Policy'. Think 'Stolen Generation'. Think two centuries of dispossession, dehumanisation and outright ghastly discimination — which includes numerous examples of mass murder and one of near genocide.

Don't kid yourself. This is not about freedom of speech. This is about the self-interested freedom of a bully wanting nothing more than to continue to overpower and dominate a weak and defenceless enemy.

This is the freedom of Australia's highest circulation newspaper – the other defendant in this case, the Herald Sun – to continue its ideological battle against Australia's first people.

Don't be misled. And don't let yourself be misled. 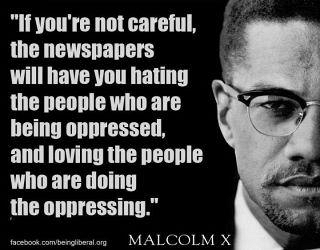