Australian private debt: and don’t skimp on the paté

If the real estate fever gripping the nation does not break soon, Australia may well secure the top OECD ranking for the most over-indebted household sector. A financial crisis beckons warns Paul Egan and Philip Soos.

Caution must be taken when using measures of consolidated debts as it assumes intra-sector solvency; an assumption the Global Financial Crisis (GFC) revealed to be precarious. Consolidated debts disguise the risk of intra-sector debts that can metastasise and threaten financial stability.

In retrospect, Ireland, Spain and the U.S. are three countries that clearly experienced debt-financed housing bubbles, thus providing a useful benchmark for comparison. Australia’s household debt to GDP ratio is clearly higher than both Spain and the U.S. at their peaks, and remains only slightly below Ireland’s peak. 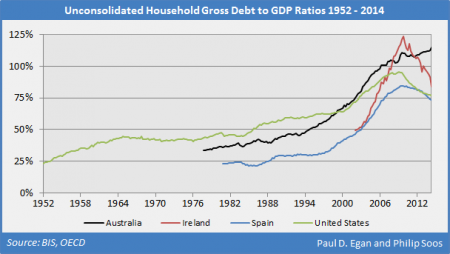 In the BIS dataset comprising 34 nations, Australia has the unenviable status of ranking fourth highest, only below that of Denmark, Switzerland and the Netherlands. Ironically, the pathology of financial capitalism drove the world’s leading social democratic state into accumulating the largest household debt ratio, peaking at close to 140 per cent in Q2 2009.

What Australia looked like before household debt grew out of control and we still made stuff #ausvotes https://t.co/XBXoAPgEMg

A range of factors may have boosted the income flows of Danish households and enabled such accumulation: a low unemployment rate relative to the Eurozone nations, very low income inequality, the world’s highest minimum wage, and a generous social welfare system.

As of Q2 2014 (the latest available BIS data), the Netherlands is just 0.3 per cent higher than Australia. As the former deleverages, Australia should rank third highest by the next quarter. The ratios have remained stubbornly high in both Denmark and the Netherlands despite deleveraging, as their weak economies have resulted in falling nominal GDP (the denominator). 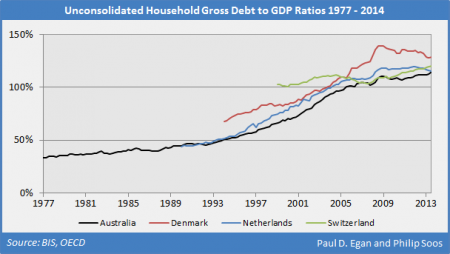 Australia’s total debt to GDP ratio peaked at 190 per cent in Q2 2009, before falling slightly as the non-financial business debt ratio fell. As of Q2 2014, the total debt ratio was 189 per cent, and is expected to set a new peak in the next quarter or so. 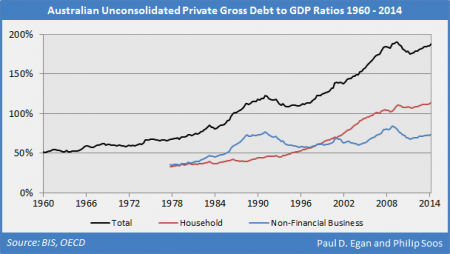 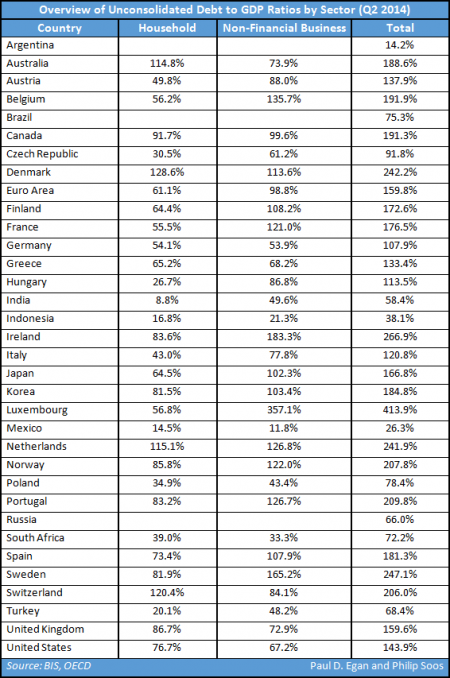 The BIS has done a commendable job in gathering long-term unconsolidated data from the OECD and BRIC nations and making it publicly available. It would be helpful if the data was further classified into categories of personal, mortgage and non-banking financial sector debt, as the latter is important when analysing banking and financial cycles.

As household debt has boomed exponentially over the last two decades, the savings of the household sector has plunged. According to the official household savings ratio provided by the ABS, it briefly became negative during the early 2000s, and then rebounded as the GFC shocked households into saving more. 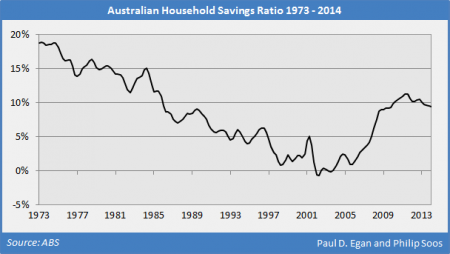 In 2013, analysis by Credit Suisse revealed that the official ratio included superannuation contributions and extra principal repayments, which arguably should not be counted as disposable savings. After controlling for these two artefacts, the ratio falls significantly, exhibiting a persistently negative trend since 1997.

The household sector’s savings situation is dire, as reported by ME Bank in a 2014 report: 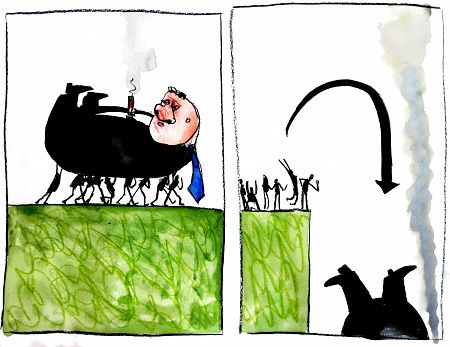 The current dynamics of the political and economic system means private debts will continue to spiral out of control, until the catastrophically inefficient FIRE sector inevitably implodes. Nevertheless, the current housing booms in Melbourne and Sydney show no sign of abating in the short-term, with 2012 an opportune time to purchase according to the ‘Speculative Index’, which measures the irrational exuberance embedded in prices.

Australia's obsession with property pushes the household debt in last 20 years from $20,000 to $80,000 per person pic.twitter.com/Uvxklz2qrf

If the real estate fever gripping the nation does not break soon, Australia may well secure the top OECD ranking for the most over-indebted household sector. A financial crisis beckons, for history documents that extraordinary over-lending routinely precipitates chaos; falsifying expert claims that ‘this time is different’.

This article was originally published on macrobusiness.com.au on 8 January 2015. 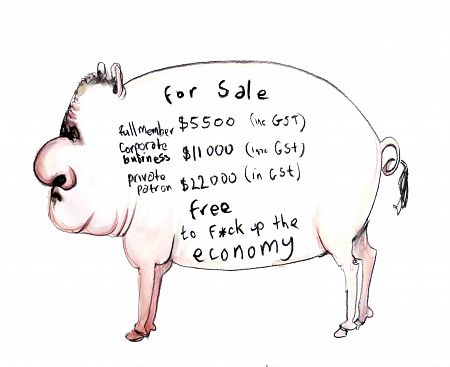