By admin | 6 December 2011, 9:42pm | comments |
The Western Australian Supreme Court today quashed the State Government's gas hub land grab at James Price Point in the Kimberley region, after court action by a local Indigenous group. But neither Woodside, nor the WA Premier Colin Barnett appear to regard this ruling as another more than a minor speed-bump on the way towards the construction of this troubling and controversial $50 billion development.

Independent journalist Antony Loewenstein has been investigating this troubling and controversial development. The following exposé first appeared in Crikey last week and reappears here with the full permission of the author. 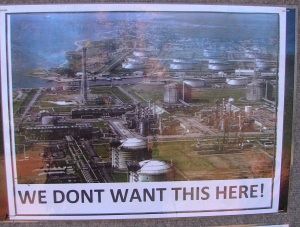 Woodside in the Kimberley — ‘Exploitation Inc’

When West Australian Premier Colin Barnett said recently that he welcomed the announcement of a permanent US military presence in northern Australia, his words were worth considering in a wider context.

“We have a large open expanse in northern Australia, we are near one of the most troubled regions in the world and the problems of Asia are now our problems,” Barnett argued. “There’s no doubt that the offshore gas facilities are vulnerable … so I think we are wise to have a friendly military presence in our north.”

The premier was effectively advocating militarising the vast Kimberley, an expanse of desert that potentially holds billions of dollars of resources to be exploited in the coming decades. The current campaign by Woodside to develop James Price Point (JPP) near Broome is just the latest example of this trend.

I recently visited the area — about one hour by car from Broome along mostly red, dirt tracks — and found a pristine area of coastline and signs of collusion between the West Australian police and private security forces against indigenous owners and protesters opposed to the massive $50 billion development. I was told by local campaigners and activists that footage shot by private security is handed over to the police and used against them in a court of law, all without proper accountability of the process. Police have publicly said they support private companies suing peaceful protesters against JPP and was told many times that police would often turn up at the blockade and show them footage shot by a private security company.

Most of the mainstream media have ignored instances of strict policing, not least because the corporate press in Perth and elsewhere largely support the Woodside plans, despite investors questioning the company’s “execution risks” over various gas projects.

The company itself released its own draft environmental impact statement in mid-November (claims dismissed by a range of green groups with whom I spoke in Broome) and the company claimed JPP would bring 8,000 jobs and “did not represent a significant risk” to the ecology of the area.

What I saw on the current Woodside compound near JPP challenged this assertion, with countless bits of broken concrete in the dirt, air-conditioners attached with flimsy pieces of rope and leaking water. Evidence for this damage is constant and includes environmental experts disputing Woodside claims.

As we walked around the site, a man appeared carrying a video camera – he refused to say what he was doing or for whom he worked – and began filming us. He disappeared 30 seconds later.

Later, another man appeared, wearing a bright-yellow fluorescent Thrifty car rental vest and dark sunglasses, and a small camera attached to his chest was flicked on to film us. He refused to say what he was really doing (apart from claiming he was protecting our “safety” near the Woodside compound) or where the footage would be screened or used.

My guides in the area, Damien and David – two men who have spent months at the blockade at JPP and established a sustainable camp with phone and internet coverage – said the guards are employed by Hostile Environment Services (HES) and that these kinds of acts occur daily.

ABC TV’s Lateline reported in May that Woodside-backed security were harassing and intimidating residents for peacefully protesting the JPP development. Damien said that massive generator-powered lights routinely shone into the camp in the middle of the night and HES guards appeared at all hours with video cameras filming them on public land.

Nothing has changed since the ABC story and it seems the pressure has only increased as Woodside notices a large swing in Broome against its plans — despite constant inaccurate pro-Woodside mainstream coverage.

Activists told me that none of the appropriate state policing or environmental bodies took action against the invasion of privacy by the indiscriminate filming or environmental damage, despite being informed about such actions on a regular basis. I was shown large amounts of footage detailing HES interrupting scientists gathering evidence of dinosaur tracks in the area.

The Woodside plans have mostly received unquestioned state and federal government backing, but they’ve been surprised by the diverse range of opposition in the Kimberley. Moreover, The Wilderness Society, the group I independently accompanied during my visit, has committed many resources to place JPP as its top campaign priority.

Groups such as Save the Kimberley and Environs Kimberley have utilised people power and social media to generate growing resistance to Woodside’s plans, principally by explaining through community events and actions that the JPP plans will not bring long-term economic gains. Both organisations state they are not ideologically opposed to any development but demand alternative forms of resource exploitation.

Even the former chief of the Western Australian Environmental Protection Authority, Barry Carbon, recently stated to Perth Now that the state’s approval process for development projects was “corrupt”.  It has now become a universal stand-over for proponents to contribute so called ‘offsets’ to governments, government friends, or favourite causes before approvals are considered,” he said.

The only major local organisation backing the JPP plan, The Kimberley Land Council, voted in highly suspicious circumstances  earlier in the year — and every Aboriginal land owner I met told me they believed indigenous people would not benefit from the JPP development, despite the financial incentives given by Woodside.

I was told by leading anti-gas hub campaigner Louise Middleton that, “we shouldn’t be bought by big business because they don’t have our interests at heart”.

The JPP development is an attempt by Woodside and its corporate partners to establish a stronghold in the Kimberley that will then allow them to invest in the upcoming gas boom. I heard many times in Broome, including from The Wilderness Society’s Glen Klatovsky, that the Canning Basin could be the ultimate source of shale natural gas and fracking. Is Australia the next global energy hub, a future Saudi Arabia or Qatar? I was shown, by the head of Environs Kimberley, a document entitled the Petroleum Titles Map that detailed dozens of proposed fracking sites across Western Australia —Rey Resources and TPL are two of the key companies involved.

This tantalising possibility is why the battle of JPP is so crucial. Stopping a $50 billion project would be an Australian first. This has global resonance as corporations ramp up their bids to win lucrative contracts in remote locations. Witness the successful lobbying in America and Canada against the Keystone XL pipeline that is now on semi-permanent hold – with public protest a major factor in shaping this outcome  –  and the largely ignored energy Great Game in Afghanistan.

(Antony Loewenstein is currently working on a book about disaster capitalism. Read more of Antony’s work at http://antonyloewenstein.com.)