Vivian Malo from First Nations Liberation staged an intervention at the Bust the Budget rally in Melbourne on May 18, reminding us our liberation is all bound together, writes Gaye Demanuele.

THIS IS A STORY THAT probably won't be published in the mainstream newspapers.

It wasn't reported on the evening news amongst the footage of angry protestors with creative placards and clever slogans. The reporters were there ready with their cameras, watching and waiting for action. There was plenty to hear and see but they did not report that Vivian Malo, a courageous Gooniyandi woman, stood proud and strong on the speaker's platform.

Her words must be heard by all but, as Gil Scott Heron said: “the revolution will not be televised”. As others have later commented:

“but it will be tweeted around the world”.

The Sunday before last (18 May 2014), Bust the Budget rallies were held across Australia.

In Melbourne, an estimated 20,000 people showed up to express their outrage at the Abbott government's vicious make the rich richer by making the poor poorer budget.

Cuts to education, health and welfare funding mean that most Australians will “share the pain” — as two men who will not feel the pain that they have imposed on the people, Treasurer Joe Hockey and Prime Minister Tony Abbott, so blithely put it. Their “profit before people” imperative arrogantly on display.

Vivian Malo, of First Nations Liberation, waited and listened as various speakers, spoke of Australia as “the lucky country” and “the land of a fair go”. Australians like to think of themselves as fair, ready to give a mate down on their luck a hand up. Many in the crowd basked in the self congratulation. They relished in the demarcation of difference between themselves and the cruel and heartless LNP government. The “lucky country, land of a fair go” mythology was enjoying a nostalgic picnic on the moral high ground.

In the glow reflected off the rose coloured glasses, Vivian Malo could no longer wait. She could no longer remain silent. In between speakers, she seized her opportunity. She jumped up onto the stage and took the microphone.

"This is an intervention," she announced. 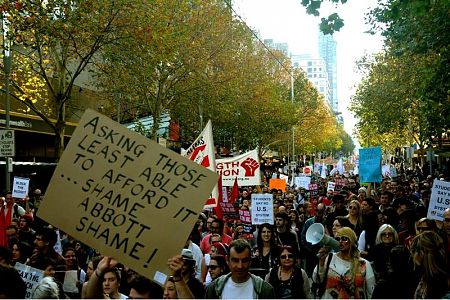 "This is an intervention," she repeated.

She explained that she wasn't one of the scheduled speakers but that she had something to say that needed to be heard. She couldn't stand by and take it anymore.

She spoke of invasion, of colonisation, of the imperialism of Australian Commonwealth being built on the stolen wages of First Nations' peoples.

She spoke of the suffering of her people, of stolen generations, of children still being removed from their families, of the over representation of Aboriginal people in gaols.

She described the defunding of Indigenous services. The only programme that will receive an increase in Indigenous funding is to boost the policing of indigenous communities.

Lucky country — for some.

"Our hearts are hurting!"

The crowd was stunned. It was their turn to be silent.

Some shuffled on their feet, uncomfortable and uncertain as to how to respond. Some nodded their heads in assent. Eventually they cheered their applause for her impassioned speech.

Vivian Malo was not asking non-Indigenous Australians to wallow in collective guilt. She was demanding acknowledgement of injustice.

Acknowledgement of the lived reality of Indigenous peoples' lives, where they can expect to suffer greater ill-health and a shorter life span then the rest of the population. Where they are more likely to be arrested and to be locked up. A reality where families live in fear of their children being removed. An injustice perpetuated by the Abbott Government policies and by governments – Liberal and Labor, State and Federal – before them.

She was demanding a real “fair go”, for the equitable sharing of resources. She stated the need for reparation and for healing. She would no longer be disappeared in the rhetoric. She wants justice, for the truth to be told.

Vivian Malo reminded us all that our liberation is bound together. Black, white, citizen, refugee, single parent, young, old, gay, straight, worker, and those in ill health or disabled.

United, we can never be defeated.