The Australian Constitution for dummies! Are we dummies, or what?

Philip Shaw highlights the power of the British Crown in, and its connections to, Australia’s current constitutional arrangements and calls for a new Constitution for Australia which properly reflects Australia’s place in the 21st Century.

THE Australian Constitution was drafted and then instituted, after many years of wrangling, nearly 110 years ago. It was a very different time then. Compromises had to be made in Australia to get the various colonies to agree to the deal, and of course, back then a quarter of the world was coloured pink on the maps as The British Empire. Back then, Australians from the various colonies were largely “British to their bootstraps”, as Sir Robert Menzies later so famously declared.

But do the broad mass of Australians today, many of whom have a non-British heritage, really understand what our 110 year old Constitution says in actual words, and also what it implies, about our sovereignty and independence? Let us have a look at a few parts of it.

Firstly, it could be said that it is not really even “our” Constitution, since it actually is an Act of the UK Parliament: “An Act to Constitute the Commonwealth of

Australia [9th July 1900]”. Consider the following from the enacting words of that Act of the British Parliament (my italics for emphasis):

WHEREAS the people of New South Wales, Victoria, South Australia, Queensland, and Tasmania, humbly relying on the blessing of Almighty God, have agreed to unite in one indissoluble Federal Commonwealth under the Crown of the United Kingdom of Great Britain and Ireland, and under the Constitution hereby established:

And whereas it is expedient to provide for the admission into the Commonwealth of other Australasian Colonies and possessions of the Queen:

Be it therefore enacted by the Queen’s most Excellent Majesty, by and with the advice and consent of the Lords Spiritual and Temporal, and Commons, in this present Parliament assembled,[ie the UK Parliament] and by the authority of the same, as follows…..

Granted that this was the only way legally to constitute the Commonwealth of Australia before it came into existence, and it occurred after full consultation with the then colonies, but is it not strange that after 110 years our own people and Parliament have still not amended, modernised and adopted this Constitution as an Act of our own Parliament?

Section 1 of the Constitution states:

So clearly the Federal Parliament includes the Queen (and her successors).

This indicates clearly that the Australian Head of State is the Queen, and that the Queen appoints the Governor General as her representative in Australia.

Section 34, in relation to qualification for members of the House of Representatives, states:

Until the Parliament otherwise provides, the qualifications of a member of the House of Representatives shall be as follows:

(i) he must be of the full age of twenty-one years, and must be an elector entitled to vote at the election of members of the House of Representatives, or a person qualified to become such elector, and must have been for three years at the least a resident within the limits of the Commonwealth as existing at the time when he is chosen;

(ii) he must be a subject of the Queen, either natural-born or for at least five years naturalized under a law of the United Kingdom, or of a Colony which has become or becomes a State, or of the Commonwealth, or of a State.

This clause is fortunately now of no effect, because Parliament has indeed since “otherwise provided” that members must be Australian citizens and at least 18 years of age. But it remains confusing, if not misleading, still to be listed as part of our Constitution. Modernisation of our Constitution would see this clause totally amended to reflect the current actuality. 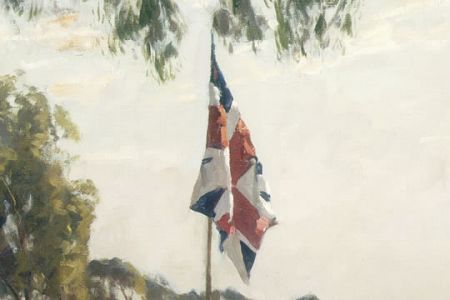 I, A.B., do swear that I will be faithful and bear true allegiance to Her Majesty Queen Victoria, Her heirs and successors according to law.

SO HELP ME GOD!

I, A.B., do solemnly and sincerely affirm and declare that I will be faithful and bear true allegiance to Her Majesty Queen Victoria, Her heirs and successors according to law.

(NOTE: The name of the King or Queen of the United Kingdom of Great Britain and Ireland for the time being is to be substituted from time to time.)

So our Parliamentarians are not required to swear an oath or affirmation of allegiance to Australia or its people, but they do have to swear allegiance to the reigning monarch of the United Kingdom! This seems somewhat strange.

In recent years Queen Elizabeth II is often touted as the Queen of Australia, but this title is certainly not clear from our current constitution.

When a proposed law passed by both Houses of the Parliament is presented to the Governor-General for the Queen’s assent, he shall declare, according to his discretion, but subject to this Constitution, that he assents in the Queen’s name, or that he withholds assent, or that he reserves the law for the Queen’s pleasure.

The Governor-General may return to the house in which it originated any proposed law so presented to him, and may transmit therewith any amendments which he may recommend, and the Houses may deal with the recommendation.

Section 59 Disallowance by the Queen

These three sections invest the Monarch with tremendous power. He or she can disallow any new laws of ours within one year, even if the Governor-General has given assent to it. Furthermore, the Governor-General is able to reserve the law for the Monarch to decide upon, and if no decision comes from the Monarch within two years then that law lapses. While these powers have never been used in practice, the fact is that they could be. Imagine if some future King of England was really eccentric (it’s possible – there have been examples in history!) and decided to invoke these provisions and prevent our Parliament from enacting certain laws. It would certainly provoke a very rapid switch to a republic!

There is a substantial body of legal opinion now in Australia that Sections 59 and 60 are obsolete, and if invoked by the Monarch, would simply be ignored. Nevertheless, as of today they still stand included in our Constitution, a highly unsatisfactory state of affairs for Australia in the 21st century. Certainty is called for.

So according to the Constitution the Monarch of the UK has the power, which is exercisable by the Governor-General as the Monarch’s representative in Australia. The Constitution is entirely silent about the role of a Prime Minister and Cabinet. Currently their roles are defined by convention only, so modernisation of the Constitution should rectify and clarify our actual model.

The command in chief of the naval and military forces of the Commonwealth is vested in the Governor-General as the Queen’s representative.

This may have been reasonable drafting at the end of the 19th century when the various Australian Colonies were still under the British Crown, but is totally inappropriate for Australia today.

The Constitution admirably provides for complete religious freedom and a secular state in Australia. Therefore, in the 21st century it is quaintly inconsistent that our Head of State (the Queen) must, according to the laws of the United Kingdom, not only be an Anglican but is also deemed to be the head of the Anglican Church. This surely would not sit well with the majority of Australians who are not Anglicans.

It is also inconsistent with the egalitarian Australia of the 21st century that our Head of State is hereditary, as an accident of birth to a British family, without any consideration as to merit, does not live among us, and without any opportunity for Australians to have a say in their selection.

It is entirely understandable how, in the prevailing cultural and British-centric worldview of the late 19th and early 20th centuries, our Constitution came to be drafted in this way. In function and in practice Australia has been fully self-governing and independent for decades, but these archaic provisions in our Constitution, even if not invoked in practice, detract from our full sovereignty and nationhood.

It says something about the laconic character of Australians that the broad masses of Australians just do not know about, or appreciate, the details of our constitutional arrangements. If they did, it is highly likely they would call for our Constitution to be modernised to reflect the reality of Australia in the 21st century.

It is high time that we, the people of Australia, adopted a new Constitution as an Act of our own Commonwealth Parliament, substantially similar to the current one, but with a new preamble reflecting the history of the last 110 years of our Federation and the various peoples, including the first Australians, who make up this nation of ours. It should exclude any and all references to the monarch and laws of the United Kingdom, and should provide an appropriate process for the selection and possible dismissal of an Australian Head of State to fulfil the role currently held by that of the Governor-General.

The Australian Constitution for dummies! Are we dummies, or what?