On the first day of National Reconciliation Week, Kelly Hockley says Australia must make amends for the disgraceful treatment of Indigenous Australians since white settlement.

Close your eyes and imagine that your child was taken away from you and everyone they loved for no other reason than your skin colour and culture was different from the majority.

You had done nothing wrong. You cared, loved and nurtured your child and they were happy and healthy. Think of the fear, distress and heartbreak you would face when the world as you know it was being ripped apart.

Now try and picture that this was not only happening to you but also to families all over the country. Hard to imagine, isn’t it?

Sadly, thousands of people in Australia know exactly how this feels — you just need to ask the Stolen Generation.

Aboriginal protection boards operated in almost all Australian states, with their stated aim being to ‘protect’ and regulate the lives of Australia’s Indigenous people. In 1909, under the Aborigines Protection Act, New South Wales first gained legal power over the lives of Aboriginal people. This tremendous power allowed control of Indigenous lives, including employment, marriage and residence. It also gave them the control to forcibly remove children from their families without having to provide any evidence that they were neglected or abused.

The reason for the removal of these innocent children has been contested. Let’s not mince words here, the truth of the matter is that white man treated Aborigines this way because they were regarded as being stone-age people who were destined to ‘die out’. By stealing the children they thought they were saving them by assimilating them into mainstream. It was genocide and the monumental arrogance shown by white people is horrifying.

As well as being institutionalised, Australia’s Stolen Generation were sometimes placed with ‘white’ families and were taught to believe that their Indigenous culture was wrong. The education provided to the children was poor and many were forced into being servants and labourers. The institutions and homes in which these children were placed could be cruel and lots of children were mistreated, suffered poverty and sexual assault.

Nobody knows the exact number of children who suffered this horrendous punishment for no crime as many of the records have either been lost or destroyed.

It wasn’t until the 1990’s that the Australian Human Rights Commission finally began a national inquiry into the Governments forced removal of our Indigenous people. The inquiry was tabled in Federal parliament on the 26th May 1997 and was titled the Bringing Them Home report. It showed irrefutable evidence about the forced removal policies that revealed the devastating effects this had not only on the children, but their families, communities and Indigenous culture as a whole.

There have been many studies that show the people of the Stolen Generation have shorter life spans, poorer health and are more prone to depressive disorders than other Aborigines. 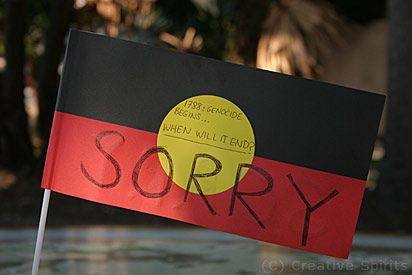 The report also called for an apology to be made and it states:

“The apology to Indigenous Australians needs to be powerful and retain the original intent of Recommendation 5a of the Bringing them Home Report which calls for Acknowledgement, Responsibility, Consultation, negotiation, reparation and compensation.”

The Australian Prime Minister at the time the report was tabled, the Liberal Party’s John Howard, refused to make an apology to our Indigenous people for the 200 years of racial oppression they received in this country.

It wasn’t until ten years later, in 2007, that Australia’s newly elected Labor Prime Minister Kevin Rudd announced that – in consultation with Aboriginal leaders – an apology was to be made to Indigenous people.

Mr Rudd followed through with his promise on February the 13th 2008, when he presented his apology as a motion to be voted on by the house. The day moved many Australians to tears. The Stolen Generation were finally recognised and apologised to by the Government. For not so many years before, Australia’s Government were so incredibly cruel to them.

So, yesterday was National Sorry day, but starting today – from 27 May to June 3 – is National Reconciliation Week. Let’s make this a week that bring us all together as one people! Let it remind us what the Stolen Generation, their families and communities have had to endure. Make it a week to grieve, to laugh, to share and to band together to make sure that the Indigenous people of our country are shown the respect that they deserve. Get involoved in some of the activities or download the face sheets from the Reconciliation website. Although hearts may never truly heal, we can all play our part to make sure that the future is better for the first people of Australia.
INDIGENOUS AUSTRALIA DISCRIMINATION Australian Human Rights Commission genocide Indigenous Australia John Howard Kelly Hockley Kevin Rudd