IT IS A HUMID day at Pickertaramoor, Tiwi Islands. A steady buzz of flies punctuates the air and all present are tantalised by a thick heavy cloud promising to ease the heat.

A group of young people are crouched over a large wreath, painting geometric patterns in the red and yellow ochre colours that epitomise the Tiwi art style. These Tiwi College students are busy completing a Remembrance Day wreath honouring those who died fighting in Australia’s Frontier Wars.

The Frontier Wars Wreath project has been created under the guidance of Rusinya Brooks, a senior student at the college undertaking a traineeship in the college’s "art learning space".

For Rusinya, making art is a way to share stories about Australia’s history with younger students, educating them about the 140-year conflict beginning with the arrival of European colonists to Australia in 1788.

The British made an attempt to establish a military outpost at Fort Dundas on Melville Island in 1824 but this was abandoned in 1829 due to attacks from the local Tiwi people. Today, only a few remains are visible near the community of Pirlangimpi. Remembering this conflict is an important step for Rusinya in the process of reconciliation.

"We often hear about WWI and WWII, but we don’t hear about Australia’s first war. Being an Aboriginal person, we pass down stories and when we tell the story we have to feel the emotions the person felt at the time. These stories are what matters to us and this wreath helps us to share these stories with other people."

Combining ceramics and wood, the Frontier War wreath was created to share the story of Australia’s forgotten war through visual symbols such as the desert pea, Tiwi spears and painted mud mussels. The Tiwi words Ngawa ngajirti ngawa-jangirliparra awarra nginingawurla ngirramini translate to: "we must not forget about the story". 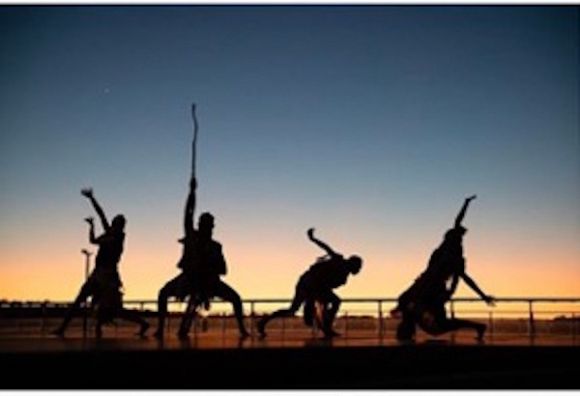 Lest we forget the Frontier Wars

Even as they were serving in the Imperial Defence Force, Indigenous Australians were being massacred in a domestic war of colonisation.

Set in an isolated bush location, Tiwi College is a boarding school initiated and governed by the Tiwi people to provide quality education for young Tiwi on Country. In the final year of her schooling, 17 year old Rusinya muses about her future on the island. One thing for sure — she wants to help overcome the divide between Indigenous and non-Indigenous people in Australia.

"You can look at history books and use whiteboards, but you can’t expect a non-Indigenous person to understand us and our way of life without sitting down with us and looking each other in the eye and connecting. This war started with people not understanding each other and I think an important part of reconciliation is really listening to each other."

Adele Booth is a visual arts educator and teacher trainer who has facilitated arts experiences both in Australia and internationally. She is currently based on Tiwi Islands, NT, Australia, on Mantiyupwi country.