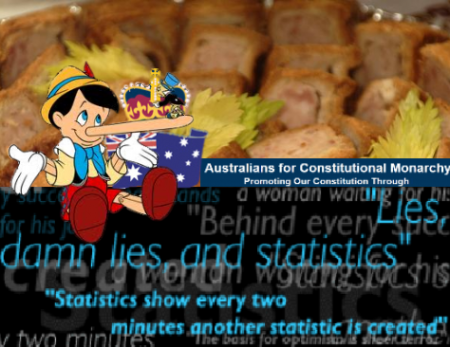 The ACM has gone after me once again for pointing out their extraordinary growth in Facebook followers over the past two months. They have, with tiresome predictability, once again repeated a mistake I make some time ago over a visit by the Gerry Adams before the 1999 referendum. As I've said on numerous occasions, I've apologised for this mistake - the fact the ACM keeps repeating my mistake shows a lack of commitment to the principles of good debate. Moreover, they also mention an ongoing debate about whether Malcolm Turnbull wanted the words "republic" and "president" removed from the question for that referendum. Again, the ACM puts words into my mouth — as I explained here some time ago. Unlike the ACM, I'm not really interested in re-litigating debates from over 10 years ago — we all make mistakes, let's move on.

Now, back to the Facebook issue, which has clearly got the ACM rattled. My accusation is that the ACM is buying "likes" for their page, which is inflating greatly its size. It has going to the point where they now, quite inconceivably, claim to have almost as many followers as group called "GetUp!". It's pretty easy to find links to websites selling Facebook likes, and a number of American politicians have been caught out doing it.

The ACM asks how I got hold of their page statistics. I note that their new Executive Director works in the IT industry. As someone who works in the IT industry myself, I assume that the Executive Director knows how to use the search engine Google. He should be able to find out how I got this information (hint: it's a public website anyone can sign up to). I find it difficult to believe the claimed level of interaction for "monthly active users is 17,593" (I assume per month). That would be in line with the sort of levels of interaction (about 75%) on other pages I administer. Facebook defines monthly active users (MAU) as:

"MAU is a summation of your daily count of unique users over 30 days. The best way to show this is on your applications insights page (linked above). Go there and tick the “last 30 days” box and the “past day” box for Active Users (engagement). If you expand the viewbar to see at least 30 days, and sum 30 day data points (the blue ones) you’ll get the MAU count on the 30th day."

As you can see, it's a nice linear line for the last 30 days. The uniformity is somewhat suspicious — surely some days you'd get more likes than others? Of course, that alone is not enough to prove my claim. We have to look at interaction levels — as reviews of websites that sell Facebook "likes" note, the profiles tend to be junk, and don't interact with the page. They're just there to "like" the page (others have complained that their purchased members write comments that don't relate to their subject, such as "I like Australia!". There seems to be a fair few of those on the ACM page).

So, we will have to look at how all of the ACM's "fans" interacted with the page.

This chart compares the interactions of a Facebook page irrespective of the amount of their fans. The result is a "combinated index of likes and comments per own post", standardised by the total amount of own posts and fans in the chosen period. The following formula is used for the calculation:

Strange, isn't it, that over the last 30 days despite growing 25%, the amount of interaction has fluctuated according to this index (which is normal for normal active profiles)? You would expect it to grow regardless of the standardisation by the index, much like share trading activity growing in proportion to the value of a share market (that is, the more people there are on the page, the more people should be interacting with it).

Now, as I said previously, I'm happy to be proven wrong. But the evidence above paints a very different story from the one the ACM is spinning.