On Sunday 16 October, the hills of the Scenic Rim in southern Queensland will be alive with the sound of protest – against  coal and coal seam gas mining. Miriam Bauman reports.

On Sunday, October 16, 27 mountain peaks in The Scenic Rim, an hour south of Brisbane and an hour west of the Gold Coast, will be adorned with residents, visitors and massive colourful banners protesting against possible mining in the region.

‘Protestors on Peaks’ is a concept initiated by Tracey Larkin from the Mt Barney Lodge and its aim is to raise people’s awareness within south east Queensland of the dangers mining poses to their recreational playground, green space, fresh air and water. The largest banner, about 40 square metres, will be lowered down the rock face of Mt French by abseilers.

Both Tracey and her husband Innes are concerned about the possibility of coal and coal seam gas mining in the region degrading such a special area.

“Because of the natural heritage and the biodiversity of the region, it’s incompatible land use,” Innes said. “There are National Parks, protected areas, Agriculture, Horticulture and Tourism that have worked together for years, and could work together for many more, but if mining is allowed in then that will destroy the sustainable existing industries.”

More than half of Queensland’s World Heritage-listed National Park area is within the Scenic Rim. Currently, 80 per cent of the land within the Scenic Rim Region is covered by overlapping EPCs (Exploration Permits for Coal) and ATPs (Authorities to Prospect for Petroleum (coal seam gas)). One of the EPC’s has already progressed to an MDL (Mineral Development Licence) for a coal mine near Boonah. The Scenic Rim region has more than 30,000 hectares of parkland — National Parks, Conservation Parks and council controlled parks. Lake Maroon and Lake Moogerah are popular spots for fishing.

The first the community learned of the possible mining was in February this year when the Beaudesert Times ran a story about an EPC in the Mr Barney area. Community meetings were held to inform people and the Keep the Scenic Rim Scenic committee was formed.

Heidi Ross, a member of the committee said:

“Our ‘Protestors on Peaks' event is taking on a life of its own now, snowballing from something unique but small into something massive. We've gone from ‘Protestors on Peaks’ to protestors in paddocks and everywhere across the Scenic Rim. Locals and people who visit this region to play and recuperate will blanket the countryside in banners and creative on-ground signage to get their message across.”

Common concerns are the risk of contamination to water supplies, the destruction of good farming land, the threat to existing jobs in tourism and farming, the reduction in land values and the loss of lifestyle. Scenic Rim Regional Council mayor John Brent was reported in the Gold Coast Bulletin on October 9th as saying his council was strongly opposed to any coal seam gas mining in the region.

"Council is very clear on its views. We strongly oppose coal seam gas mining in our area and we have made this clear on numerous occasions," he is reported to have said. 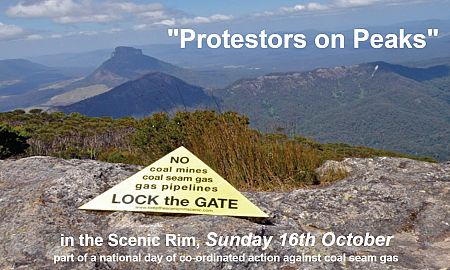 ‘Protestors on Peaks’ is just one event of many being held on Sunday  as part of Lock the Gate Alliance’s National Day of Action against coal seam gas and the importance of defending our water. It is also World Food Day and communities will rally to also protect our farmland under threat from coal and coal seam gas mining. Other rallies are planned for Townsville and Brisbane in Queensland. In New South Wales supporters will gather at  Armidale, Broke, Bryon Bay, Bulahdelah, Bunnan, Burringbah,  Byrrill Creek, Coalcliff,  Kyogle, Mt Burrell, Murwillumbah, Newcastle, Nimbin, Putty, Sydney, Tweed Heads, Tyalgum and Uki, and in Western Australia at Margaret River. For a full listing of events, visit http://lockthegate.org.au/events/.


To view the extent of exploration in The Scenic Rim, click on the following link: 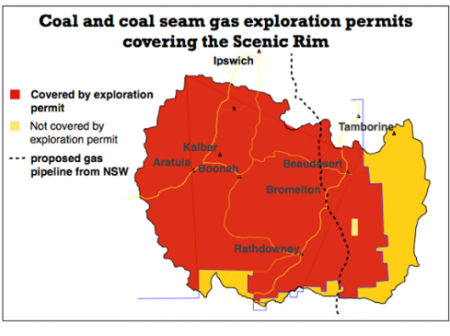