Julia Gillard's position on the republic


Julia Gillard spoke to a panel of four journalists from The Age newspaper last Thursday at Media House in Melbourne. One of the issues she discussed at length was her position on an Australian republic.

GILLARD SAYS she is a republican but makes it obvious that she isn't willing to risk a gramme of political capital pursuing the issue. She also, like most politicians, expresses her disdain for the direct election model favoured by the vast majority of the Australian voting public.

Below is an edited transcript of her comments on the republic. Watch the video to see her speak about this issue on full (about 5 minutes in on the linked-to video). 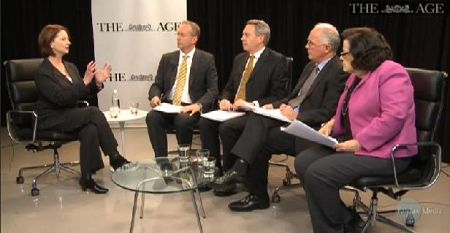 WHAT plans do you have about taking the country towards becoming a republic?

I'm a Republican, so I would like to see us progress towards being a republic. Community interest in this topic has not gone away though the tempo of debate has certainly cooled since the days of the republic referendum. I think Australians may re-engage in this question again. I would be happy as prime minister to be there as a participant in that debate but I think the history of the last referendum and why it was lost tells us that people don't want politicians coming along and imposing models on them. They want to feel an organic sense of connection to this debate, and so we would need a step up in community advocacy and community activity.

I think that as Queen Elizabeth ages, and I don't want to wish her ill, people will naturally begin to want to discuss arrangements for after the end of her reign. I think that will be the next natural time for people to begin discussing plans for a republic.

SO you wouldn't be looking to drive it - it would need to come from somewhere else?

No. The movement for it needs to be deeper than politicians. If a Prime Minister started to drive the issue the it would be immediately set up for failure as it would instantly would become a partisan issue.

YOUR predecessors, going back to Kim Beazley, outlined a process to achieve that by having an indicative plebiscite on the model and then, if there is a strong support on a particular model, putting that to a referendum. Is that something you would embrace?

We saw last time that disputation around the model caused the failure of the referendum overall, and unless you get a sense of what the model is going to like you are going to always end up in that terrain.

I am certainly not a supporter of the direct election of a president, which is something that appears to have natural supprt in the wider community, to elect your own President. I think it would be too much of a distortion to our current system of government.

On what basis would one stand for election on a position that is like the governor-general as we know it, because by definition we don't seek to have political partisanship or political power projected from that office, so I don't think we should introduce a system where you can have a president and prime minister at odds on day-to-day contemporary political questions, with all the stresses and strains that could put on our system.