The modern doctrine of pitiless cruelty towards asylum seekers as means of deterrence is unsubstantiated, asinine and infantile — and is leading us astray, writes Dr Liz Conor.

’TIS THE SEASON TO BE INUNDATED with Ferrero chocolates, lost for a park and trawling stands of trinketry under piped contemporized carols. Until the kiddies pounce on your bed at half-light and the family arrives all smiles, it’s a hard slog of preparation, of par boiled potatoes, canvas coddled puddings and marinating roulades.

If any spirit of Christmas survives this onslaught of consumerism and resource gouging, it tends to contract to our nearest and dearest, as we put to one side sniping family dynamics and get stuck into the totem tennis while cousins run and splash in happy herds.

The ethos of giving is certainly not forgotten by our favoured charities, as an influx of Christmas appeals slot through our letter boxes at a rate to rival Harry Potter’s Owlish call to Hogwarts. There is barely time to attend to them all and they all play on precisely this disjoint between fostering family while some families go untended.

This season, that disjoint is most defined by families in detention as a series of distressing revelations of the conditions on Nauru, Manus and Christmas Islands have recently come to light.

A mother separated from her hospitalized newborn, a baby on a defective pacemaker denied adequate care, an infant death and stillbirth following mothers repeatedly being turned away from a camp clinics and one denied an ultrasound, and depressed children self-harming. Doctors cite “unsafe practices and gross departures from generally accepted medical standards”, particularly in regards to neonatal care and the detention of over 1500 children.

Doctors and senators are decrying substandard facilities and treatment, likening mandatory detention to child abuse and railing against the governments disbanding of the Immigrant Health Advisory Group. It is utterly contrary to the charity and care we display over Christmas that this abuse and cruelty can be justified in terms of our security and protection.

The doctrine of deterrence is at the heart of this government’s amplification of the previous two governments’ dehumanising policies. It is ideological in substance, its precepts barely examined — appealing instead to common sense assumptions about human nature and motivation. It has, of course, been disproved — every time people fleeing the persecution that threatens their very lives opt for a risky transit to Australian shores. No amount of abuse will deter people whose lives are already under threat.

Desperation and deterrence have been pitted against each other by our recent governments in a macabre competition with the cruelest regimes on this earth. Ultimately, Scott Morrison is aiming to outdo bloodletting leaders he positions as his rivals in human rights abuses to further daunt the most frightened people among us.

This doctrinaire logic of deterrence has our nation in its grip, yet it is unsubstantiated, asinine and infantile. It is leading us astray.

A challenge was made to us as a nation before Christmas in 1889 to resist the attraction to certainty held out to us by doctrinaire logic. It appeared all this time ago in the Queenslander ‒ the weekly masthead of the Brisbane Courier ‒ in a now lost article on the theory of Dying Race as applied to Australian Aborigines. 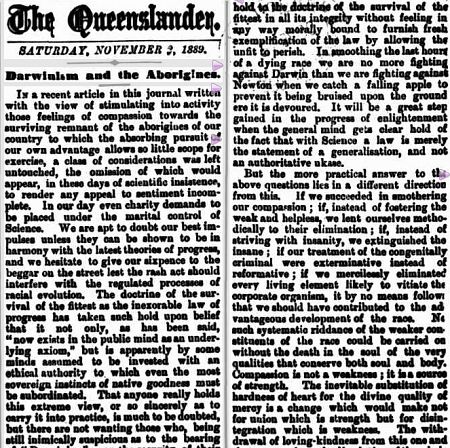 (Excerpt from 1889 Queenslander article 'Darwinism and the Aborigines', via trove.nla.gov.au)

The rubric of Darwinian Evolution was then being misappropriated to race relations under the consolidating doctrine of Social Darwinism.

This remarkable, historically mislaid, intervention argued cogently against the doctrine of survival of the fittest as it was being applied to ‘the dying remnant of the original possessors of the soil we now hold’. It is a chilling read in hindsight, for it summons prophetically some of the worst experiments of the twentieth century. Under the axiom of survival of the fittest, extermination of the ‘unfit’, the ‘weak and helpless’, the ‘congenitally criminal’ and insane would become a matter of scientific regulation.

Reading it forward, as we now can, into the global rise of eugenics and its influence on National Socialism the article is startlingly prescient.

‘No method should be considered too severe to bring about such restriction of population in proportion to the means of subsistence as would conduce to the "fitness" of those most Darwinianly deserving to survive.’

The unknown author observes that if the aim of nature is that only the fittest should survive, ‘charity is choked at the fountain-head’.

Under this sway, they add:

‘… we hesitate to give our sixpence to the beggar on the street lest the rash act should interfere with the regulated processes of racial evolution.’

Arguably, it was a similar hesitation, this uncertainty among many Australians in response to the growing number of drownings that both parties harnessed to the doctrine of deterrence.

In 1889, this broadside against doctrine was probably torn into strips and hung on a nail in the outhouse. If it had been heeded over a century ago, history might have taken a different course. For, as a nation, we are now beholden to a doctrine no less ideologically pernicious — this dehumanising ‘mandate’ of deterrence.

Like Darwinian evolutionary science and its vernacular misintepretion into Social Darwinism, the theory of deterrence has its basis in revered scholars. It can be traced to the social contract philosophers Hobbes, Beccaria and Bentham. It was revived in the cold war to justify the escalation of nuclear weapons to deter Soviet aggression. And it is outdated and obsolete.

If there is one expression of charity we can extend to families enduring detention this Christmas, it is our common refusal to succumb any longer to the doctrine of deterrence as it is being applied to asylum seekers.

‘Compassion is not a weakness; it is a source of strength .… It is not the cruel nations that are strong. The pity extended to the helpless expands into kindness towards the whole group, and the result is mutual support and lasting consolidation.’

Liz Conor teaches at the National Centre for Australian Studies at Monash University. The originals of John Graham's art, as featured in this piece as well as elsewhere on IA, are available for purchase by contacting managing editor David Donovan at editor@independentaustralia.net.

30 December 2013, 10:30am The modern doctrine of pitiless cruelty towards asylum seekers as means of deter ...

2 September 2013, 2:56pm Despite the urgency for climate change action, the “greatest moral challenge of ...
Join the conversation
comments powered by Disqus
News updates