Perhaps Australia's greatest ever republican was Daniel Deniehy. What follows is a short history to his brief but brilliant public life.

William Bede Dallye referred to his fellow currency lad as ‘the most brilliant of the native born inhabitants of this country. By all accounts, it was an accurate description. In his tragically brief public career, Deniehy distinguished himself first as a promising poet and short-story writer, and later as a literary critic, social and cultural commentator, orator, essayist, satirist, politician and republican publicist of prodigious ability.

Deniehy was born in 1828 and was in the public eye for a bare seven years: from August 1853 when he delivered his ‘Bunyip Aristocracy’ address, one of Australia’s most memorable political speeches, until the final edition of his Southern Cross newspaper, in August 1860. He did edit the Catholic newspaper, the Victorian, on and off in 1862-1864, but his activist and influential days had finished. Alcohol, ‘Our Lady of Darkness’, had taken over, and he soon after died a squalid death in a Bathurst street in October 1865.

Residing at Mandelson’s Hotel in Goulburn from 1854 - 1855 and thereafter at a private residence in Goulburn until 1858, he gradually articulated (in the pages of the provincial Goulburn Herald) a vision of a society of Whitmanic democrats, a ‘community of families’, prospering in the Australian bush.

Deniehy dreamed, in other words, the first Australian utopian dream.

Deniehy left Sydney to take up residence in the southern New South Wales town of Goulburn, probably travelling on 24 May 1854. As he indicates in a letter to Lang – one of the most important in Australian republican history – he had two aims. To improve his fragile health and to make sufficient money to support his family adequately. That he failed to realise both aims, however, is not a fair measure of the significance of his years in the bush. From May 1854 until his election to the New South Wales Legislative Assembly as the Member for Argyle in February 1857, Deniehy had, as he put it in a letter written in early 1856, ‘the leading column of the Goulburn Herald at my command...’. One of his friends, a solicitor in Yass, called it ‘a regular Reign of Terror’. Though Deniehy arrived in Goulburn determined to avoid public life while he furthered his broad cultural and moral education, the bewildering frequency of important political events forced his hand. Australia’s squattocracy threatened domination. Thus Deniehy embarked on a long series of Goulburn Herald editorials, some brief but most meticulously detailed and consciously iconoclastic. Collectively, they represent Australia’s most challenging republican output by a single author.

After arriving in Goulburn, Deniehy eschewed direct confrontation with William Charles Wentworth and his squattocratic ‘sham legislators’ and opted instead for more wide-ranging social, cultural and political considerations in his Goulburn Herald editorials. The moral foundations for all his later activity were established in this pivotal article. ‘Our Country’s Opportunity’ is Deniehy's social blueprint to ‘Advance Australia’—his scheme for the future. American visionary, transcendentalist thinkers – in particular Ralph Waldo Emerson, William Ellery Channing, Orestes Brownson and Theodore Parker – appealed because of their republican ‘New-World’ assumptions. If John Dunmore Lang concerned himself in the 1850’s with the practical steps needed for Australia to become a republic, Deniehy preferred to address spiritual issues. He contemplated an ideal republic in the Southern Hemisphere.

In early July 1854 Deniehy delivered a lecture at the Goulburn Court House on the ‘Poetry of Ireland’ to the members of the Mechanics’ Institute and, as the Goulburn Herald reported, to


‘...a numerous assemblage of visitors, amongst whom were many ladies. The audience was evidently electrified by the exquisite language, deep pathos, and racy humour of the lecturer, and by repeated applause testified to their delight, the lecture was a most delicious treat...’.

Describing himself in his talk as a ‘Botany-Bay literateur’, Deniehy demonstrated to Goulburn’s citizens that he wanted to raise the standard of cultural and literary debate; he was also equally determined to analyse the weaknesses of the colonial power structure. Just as the best Irish poetry had, as the editorial said ‘local colouring, the hue of essentially national feeling, the tints borrowed from a differential and heartily local treatment of local customs, feelings, scenes, aspirations, objects....’, so colonial government needed its local colouring, its ‘men of Australia’.

In recognising the desperate need for universal education in Australia, Deniehy gravitated to a fundamental notion held by American writers from Thomas Jefferson the New England Transcendentalists and Walt Whitman. Democracy, susceptible to mob rule, necessitated and intelligent an informed populace. In the United States, the lyceum had and important role in population education; Australia had its mechanics’ institutes. Deniehy liked to call the institute 'the People’s University of the age’ and felt it to be a meaningful case of the people taking 'their culture into their own hands’. 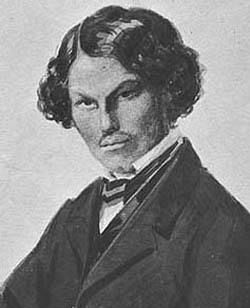 The proposal by the Solicitor-General of New South Wales to tax colonists in order to defray Britain’s Crimean War expenses provided Deniehy with a perfect opportunity both to revisit the issue he had discussed in the People’s Advocate three months earlier, and to rekindle the republican debate. Deniehy finds irresistible the historical parallels between the Australian colonies and pre-revolutionary America, thus confirming his name on the growing list of Australian commentators who, since William Charles Wentworth in 1819, had threatened Great Britain with the prospect of colonial revolt. In an editorial entitled ‘Our Representatives’, written three weeks after this one, Deniehy was even more specific in his praise of American precedent:


‘The names of those men who took a prominent part in the great movement which led to American independence now occupy a conspicuous place in history, and though most of them were men of humble origin, yet they will descend to posterity revered and cherished by all the wise and good in every nation of the earth’.

In his Goulburn Herald editorials of late 1854 and early 1855, Deniehy maintained a furious attack on what he called ‘the infamous Wentworth Constitution Bill’. The aim of Wentworth and ‘some dozen of his friends’ was to confiscate for their own uses ‘the finest portions of the public lands, to stereotype themselves into a standing government, so that they may retain, watch over, and protect the booty they wrest. It is a battle in which the people must gain the victory...’. This victory would, for Deniehy, only come if every person assumed the responsibility of acting as a 'trustee for posterity’. Within this context, each citizen, each ’guardian’ of the country, had to recognise the necessity of obtaining as much public education as possible—as the American Unitarian clergyman William Ellery Channing (1780-1842) advocated in his influential Self-Culture (1838). Channing defined 'self culture’ as ‘the care which every man owes to himself, to the unfolding and perfecting of his nature’.

Keenly anticipating ‘the greatness of the Australian republic amongst the mighty nations of the earth’ (from late 1854 onwards), Deniehy steadily expanded his conception of a utopian Australia comprised of a society of small farmers—as John Dunmore Lang and John West had before him. Though naive, it was a grand dream and the first substantial attempt by a native-born Australian to explore an alternative vision to a squatter monopoly.

In a letter to his close friend John Armstrong, written on 6 January 1856, Deniehy discussed some of the domestic details of his life in Goulburn. He was far from contented because, as he put it,


'while occupied up to the neck in the muddy waters and monotonous turbulence of sylvan law, struggling for existence, the golden hours for the mental and spiritual study and experiences which are to fit a man for doing something of the great and the good in his generation are melting sadly and rapidly away’.

Deniehy strongly endorsed the need for a 'complete’ education for all aspiring parliamentarians; he was also highly conscious of 'the broader proportion of wisdom and learning’ that he himself still required. Nevertheless, his dissatisfaction with the composition of the Legislative Assembly (since the inception of self-government for New South Wales in May 1856) was such that when a vacancy in the Goulburn seat of Argyle was created, in January 1857, Deniehy was prevailed upon to stand. Not surprisingly, the Goulburn Herald editorial writer, committed to liberal politics, supported the liberal candidate—himself.

In a letter to the Goulburn Herald, written on Christmas Eve 1857, Deniehy referred to the 'utter confusion’ in parliament. 'The popular party is falling to pieces’, he said, and


'meanwhile the squatting capitalists are waiting with a grim chuckle, secure of coming back to that power which will enable them still longer to keep to their private uses the national estate to the injury of the people at large...’.

Yet if the ’Land Question’ dominated his thinking, it must have been with immense satisfaction that Deniehy, as the sitting member, laid the foundation stone for the new Mechanics’ Institute in early January 1858. For well over three years he had lobbied for its establishment in suitable premises. Finally, Goulburn had its 'People’s University of the age’.

Daniel Henry Deniehy died and was buried in Bathurst. About 30 years later his remains were exhumed and reburied in Sydney’s Waverley Cemetery. Approximately 500 people were present at the ceremony. Later, a monument was erected over the grave. An inscription on it reads:


The vehement voice of the South
Is loud where the journalist lies
But calm hath encompassed his mouth,
And sweet is the peace in his eyes.