John Skene has a plan for new Australian Constitution that would deliver both a Republic and more Independent MPs.

After reading Mark M Aldridge and managing editor David Donovan’s articles on the Independent Australia web site about how hard it is to get independents elect into parliament, as well as one of David’s article about Australia becoming a Republic, I suggest that if we are to become a republic, then how about updating the constitution as well.

I am not a politician or a lawyer, just an ordinary bloke that would like to see a fairer Australia for all Australians. These are my own thoughts and what I have been thinking of for a while.

Our constitution is over 100 years old and it has served us well over that time. It would have been a good constitution back in 1901, but today it doesn’t reflect our modern Australia. At present, we have seven different Constitutions in Australia — essentially telling us how our respective parliaments work and what laws they can and cannot bring in.

Here are links to the:

So, why do we need seven Constitutions when we are all Australians? The A.C.T and the Northern Territory seem to operate adequately under the Australian Constitution, so why not combine them all into one, so all Australians are living under the same constitution? People might say that the states would lose their autonomy under one Constitution — but with what I’ve got in mind, I don’t think they would.

The community could nominate people who have received Australia’s highest medal – with the Companion of the Order of Australia (AC) – for consideration by the Federal or their State government. Then, all the governments – Federal, State and Territories – with the support of all political parties, could nominate three or four people from those to be put forward. This group would then be put to an Australia wide vote of the people to elect six members to form a a team of 5 years called the Presidential Select Committee, which would sit only when required, or if the President or the chairperson of the Presidential Select Committee ask for them to meet. It should be chaired by any one of the justices from the High Court. The committee would nominate three members with the Companion of the Order of Australia to Federal Parliament to become President of Australia.

The Prime Minister of the day would recommend one of them to parliament to become president, with the approval of the leaders of all political parties sitting in parliament at the time. It would then be put to the vote of both houses of parliament, with a supermajority of 2/3 to approve the candidate as president.

The President would carry out all the duties that the Governor-General does now, but would seek advice from the Presidential Select Committee on any appointments he or she makes and on any use of the reserve powers.

The President could only be dismissed by a vote of the Presidential Select Committee. If the president dies or has to leave office for any reason, there are still two people already nominated to the parliament that are able to fill the rest of the term.

In the debate we had about the republic, there was nothing said about State Governors. The Presidential Select Committee would nominate 3 people with the Office of the Order of Australia (AO), which is our second highest medal, to each State Government for Vice President of that State and the same sort of appointment process would occur as for the President.

Politicians, ex-politicians and people who had been a member of any political party for the previous 10 years would be ineligible to stand for either the Presidential Select Committee or for the President or Vice President positions. 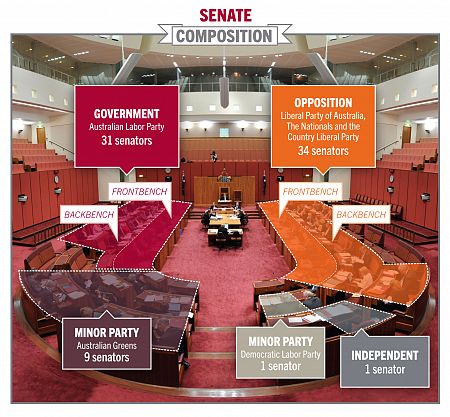 The Constitution was set up for the senate to be a house of review and to look after the States’ rights and that is why there are 12 senators from each state. It does review all legislation with its committee system — but it does not look after States’ rights, being controlled by political parties.

I advocate having two more senators from the Northern Territory and the ACT, making 80 senators in total. To overcome the Party domination, I then suggest have 6 senators from each state and 2 Senators from each of the territories be reserved for independents, with the other senators coming from political parties — making 40 independents senators and 40 affiliated with political parties in total. The independent senators would, of course, look after the concerns or States far more than senators aligned with a political party, who always vote along party lines. It would also stop the government of the day having control of both houses of parliament — a reasonably common and most undemocratic possibility under the existing system.

Of course, the Constitution must ensure that no political party could help in any way any independent senator to be elected and that no senator could be a Minister or shadow minister.

All governments – Federal, State and Territory – should have fixed 4 year terms. In addition, if the Federal election is on the first Saturday in March, for instance, all the states would have their elections on the first Saturday in March two years later — in something like the mid-team elections in America. The Senators affiliated with a political party would stand for election when the Federal election is held and the independents senators would stand for election when the state elections are held — which would give all Senators a four year team instead of six years, as it is now. 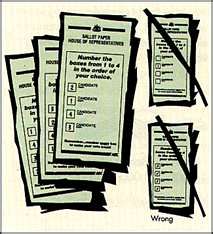 To ensure governments couldn’t change electoral laws to suit themselves, I suggest a committee made up of all political parties from the federal, state and territory governments, along with some community members, to work out a set of electoral laws for all elections so they are the same throughout Australia. These could then be written into the Constitution.

Disagreement between the Houses

Speaker, Deputy Speaker and the President, Deputy President of the Senate