Robert Vose elaborates on his detailed plan for making Australia a republic — without requiring radical changes to our Constitution. 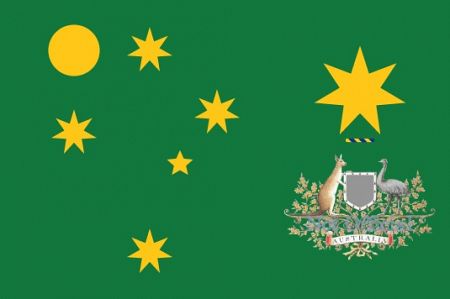 In this article, I will outline a new way to envision an Australian President. In subsequent articles I will elaborate upon the reasoning behind aspects of this new model.  With any kind of major change to an existing system, any serious proposals will have to be compared against the existing system and other proposed frameworks, with the differences in design and implementation being identified and discussed.

This new approach will leave the Constitution as it is now, with the exception of an amendment to Section 59 and a new section to define the rules for electing an Australian President. Only one Section of the Constitution needs to be changed for a republic, with a new Section added to define the election of the President. Two sections only! The process for becoming a republic will be discussed in another article on Independent Australia.


The Australian Presidency — replace the Queen and keep the Governor-General

The Governor-General, however, is charged with the formal duties of the Executive for the Federal Parliament and Commonwealth such as of providing assent to legislation, swearing in ministers, dissolving Federal Parliament, etc, as the Federal representative of the Australian President. Each of the state Governors will also continue with their formal duties as the State's representative of the Australian President for their respective state. The formal duties of the Governor-General and the state Governors will remain unchanged in a republic. The Governor-General will continue to represent the head of state for the Federal Parliament and the Commonwealth — whether the head of state is the monarch or an elected Australian President.

The following diagram should help to demonstrate how this would work: 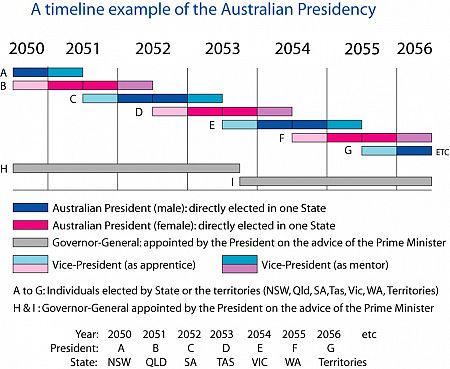 The gender of the elected President will alternate from year to year. When the acting President is male, the supporting Vice-President is female, and vice versa. Every even calendar year will have a male President acting as head of state. These rules about gender would not apply in the event of a dismissal or resignation of an elected Australian President. The titles of President and Vice-President are only provisional at this stage.


Election of the President — State-based round robin

Each President shall be elected as the representative of one State only. These States are currently: New South Wales, Queensland, South Australia, Tasmania, Victoria and Western Australia. The territories combined will also elect one President. This makes for a total of seven electorates for the Australian Presidency.

The specific methods for the nomination of candidates will be determined by each particular State and the territories. The Constitution would specify minimal conditions for the election to be deemed a valid election for the Presidency. This will allow for some variation between states on methods of nomination and the style of the election campaigns. The costs for election will be negotiated and shared between the particular State and the Commonwealth. Some of the less populous states may enact more egalitarian methods of nomination and campaigning, while the states with larger populations might be content with standard direct election competitions. The details of nomination and campaigning would not need to be worked out at a federal level. Only the minimal conditions for a fair election need to be specified in the Constitution.


Powers of the President — amended section 59 only

The Governor-General, who is appointed by the President – but only on the advice of the Prime Minister – will continue with the formal duties that are essential for the business of Federal Government as the representative of the Australian President. The state Governors will also continue in their current roles — as the representative of the Australian President for their respective state Government. The Governor-General and State Governors will continue to have the reserve powers in a republic.

My solution to overcome this problem is to modify Section 59 of the Constitution by adding a "Bee-Sting" clause. Section 59 in its current form could be likened to the sting of a Queen bee. It could be used repeatedly if it were to be left unchanged for a republic.

Section 59 - disallowance by the Queen

In conclusion, this is a brief outline of an alternative model for an Australian republic that differs quite substantially from existing models and frameworks that have been discussed. This is a model that meets many of the requirements for an Australian republic. In subsequent articles I will elaborate on the reasoning behind aspects of this model and demonstrate how this framework and model is likely to gain the approval of the public so that this model will win in a referendum.