In advance of the half Senate by-election in WA, Senator Scott Ludlam delivers some searing truths about his home state to Prime Minister Tony Abbott.

I do this in good faith, because we are only a matter of weeks away from a historic by-election that will not just determine the final makeup of this chamber after July but also will decide much more of consequence to the people of Western Australia, whether they are thinking of voting for the Greens or not. Prime Minister, you are welcome out west, but this is a respectful invitation to think carefully about what baggage you pack when you make your next flying campaign stopover.

When you arrive at Perth airport, you will alight on the traditional country of the Whadjuk Nyoongar people, who have sung this country for more than 40,000 years. This is 200 times the age of the city that now stands on the banks of the Derbal Yerigan, the Swan River. Understand that you are now closer to Denpasar than to Western Sydney, in a state where an entire generation has been priced out of affordable housing. Recognise that you are standing in a place where the drought never ended, where climate change from land clearing and fossil fuel combustion is a lived reality that is already costing jobs, property and lives.

Mr Prime Minister, at your next press conference we invite you to leave your excruciatingly boring three-word slogans at home. If your image of Western Australia is of some caricatured redneck backwater that is enjoying the murderous horror unfolding on Manus Island, you are reading us wrong. Every time you refer to us as the 'mining state' as though the western third of our ancient continent is just Gina Rinehart's inheritance to be chopped, benched and blasted, you are reading us wrong.

Western Australians are a generous and welcoming lot, but if you arrive and start talking proudly about your attempts to bankrupt the renewable energy sector, cripple the independence of the ABC and privatise SBS, if you show up waving your homophobia in people's faces and start boasting about your ever-more insidious attacks on the trade union movement and all working people, you can expect a very different kind of welcome.

People are under enough pressure as it is without three years of this government going out of its way to make it worse. It looks awkward when you take policy advice on penalty rates and the minimum wage from mining billionaires and media oligarchs on the other side of the world-awkward, and kind of revolting. It is good to remember that these things are temporary. For anyone listening in from outside this almost empty Senate chamber, the truth is that Prime Minister Tony Abbott and this benighted attempt at a government are a temporary phenomenon. They will pass, and we need to keep our eyes on the bigger picture.

Just as the reign of the dinosaurs was cut short to their great surprise, it may be that the Abbott government will appear as nothing more than a thin, greasy layer in the core sample of future political scientists drilling back into the early years of the 21st century.

The year 2014 marks 30 years since the election of the first representative of what was to become the Greens-my dear friend and mentor Senator Jo Vallentine. She came into this place as a lone Western Australian representative speaking out against the nuclear weapons that formed the foundations of the geopolitical suicide pact we dimly remember as the Cold War.

Since the first day of Senator Vallentine's first term, the Greens have been articulating a vision of Australia as it could be-an economy running on infinite flows of renewable energy; a society that never forgets it lives on country occupied by the planet's oldest continuing civilisation; and a country that values education, innovation and equality. These values are still at the heart of our work; nowhere stronger than on the Walkatjurra Walkabout, which will set off again later this month to challenge the poisonous imposition of the state's first uranium mine on the shoreline of Lake Way. As the damage done by the nuclear industry is global, so is our resistance.

Mr Abbott, your thoughtless cancellation of half a billion dollars of Commonwealth funding for the Perth light rail project has been noted. Your blank cheque for Colin Barnett's bloody and unnecessary shark cull has been noted. Your attacks on Medicare, on schools funding, on tertiary education-noted. The fact that your only proposal for environmental reforms thus far is to leave Minister Greg Hunt playing solitaire for the next three years while you outsource his responsibilities to the same Premier who presides over the shark cull has been noted too.

You may not believe this, Prime Minister, but your advocacy on behalf of foreign biotechnology corporations and Hollywood's copyright-industrial complex to chain Australia to the Trans-Pacific Partnership has been noted. People have been keeping a record of every time you have been given the opportunity to choose between predator capitalism and the public interest, and it is bitterly obvious whose side you are on.

So to be very blunt, the reason that I extend this invitation to you, Mr Prime Minister, to spend as much time as you can spare in Western Australia is that every time you open your mouth the Green vote goes up.

You and your financial backers in the gas fracking and uranium industries have inspired hundreds of people to spend their precious time doorknocking thousands of homes for the Greens in the last few weeks.

Your decision to back Monsanto's shareholders instead of Western Australian farmers has inspired people across the length and breadth of this country to make thousands of calls and donate to our campaign.

As for the premeditated destruction of the NBN and Attorney-General George Brandis's degrading capitulation to the surveillance state when confronted with the unlawful actions of the US NSA-even the internet is turning green, 'for the win'. Geeks and coders, network engineers and gamers would never have voted Green in a million years without the blundering and technically illiterate assistance of your leadership team.

For this I can only thank you.

And, perhaps most profoundly, your determined campaign to provoke fear in our community-fear of innocent families fleeing war and violence in our region-in the hope that it would bring out the worst in Australians is instead bringing out the best in us. Prime Minister, you are welcome to take your heartless racist exploitation of people's fears and ram it as far from Western Australia as your taxpayer funded travel entitlements can take you.

What is at stake here, in the most immediate sense, is whether or not Prime Minister Tony Abbott has total control of this parliament in coming years. But I have come to realise that it is about much more than that. We want our country back. Through chance, misadventure, and, somewhere, a couple of boxes of misplaced ballot papers, we have been given the opportunity to take back just one seat on 5 April, and a whole lot more in 2016.

Game on, Prime Minister. See you out west.

This speech was an adjournment speech delivered to the Australian Senate at 10.09pm on 3 March 2014 and has been republished from the Australian Greens' website. You can follow Senator Scott Ludlam on Twitter @SenatorLudlam. 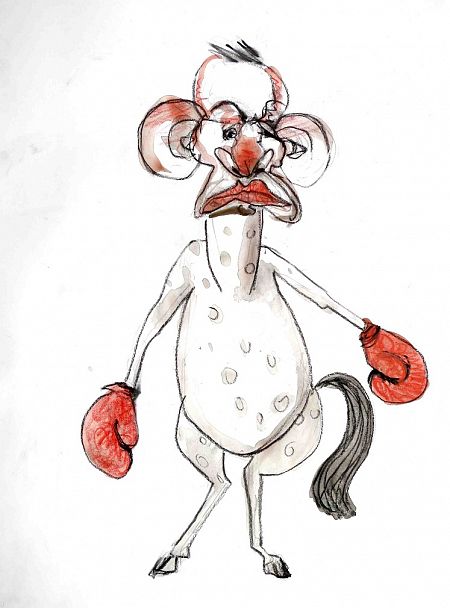