Canberra academic John Passant has been subjected to vile threats after writing about a recent Melbourne demonstration against education cuts — and has traced some of them back to Victoria Police. 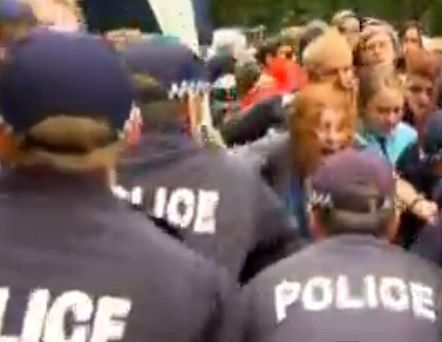 LAST WEEK, students in Melbourne protested against education cuts. My comrades in Socialist Alternative wrote in Red Flag about the violent police attack on this peaceful demonstration.

I re-posted it on my blog En Passant. If you go into my blog, the comments link is under the heading of the article. There, the real nature of at least one member of the Victoria Police and of various cowardly right wingers is on display.

The response from the right on my blog has been quite eye-opening. They never give their real names and invariably threaten some kind of reprisal. In other words, they replicate the police in their view that there is a god-given right to violence against those who disagree or dissent. I’ll come back to that, including death threats, in a minute.

Here is what one of the commenters said. (Excuse the language the commenter uses, but it helps make the point about the unsuitability of police to police anyone.)

Never let the truth get in the way of a good story hey cockhead?

So that means Victoria Police, during work time, feel free to use government resources to display their hatred of protesters in the most foul and misogynistic way.

How can anyone receive a fair trial when the police bias against demonstrators is so obvious and on display?

I also received this death threat.

What kind of one sided shit is this? Seriously, if you can’t write something that isn’t biased and spun then maybe you should shut down this website and go back to being a drain on society. You’d make good money in advertising until consumers realised how bad you are at spinning facts. Seriously if angry students started to try and mob me I would want the police to get them away. Its a shame ignorant stupid garbage like this is still on the internet. They should put a bullet in you, for the good of everyone else

Other comments on the site call for me to drown, to be ‘disciplined’, pepper sprayed, and so on and so on ad nauseam.

Now, I have a view that the police are the armed thugs of the capitalist state and their main role is to protect the capitalist system from any threat, major or minor. If the political mood suits, and it does, part of that includes silencing dissent. Physically attacking protesters looks set to become the new norm.

This demonisation of the other and increasing criminalisation of difference and dissent – the unlawful associations laws currently being used to attack bikie gangs are the latest example – is all around us. Refugees, Muslims, Aborigines, bikies, protesters, unions, leftwing groups — we are all, or can be, the ‘enemy’ in the minds of the ruling class. This tactic of targeting minorities has a long and dishonourable history from conservative governments, and their armed thugs, the police, are often at the forefront of it. They will say they are just ‘following orders’, but they do so with gusto because it is their real role in society.

What better way to distract attention away from the increasing problems of the Queensland economy than to concoct a state of crisis around bikies and begin to round them up without any attempt at due process?

This means that for someone like me, I cannot go to the Victorian Police to express my concerns about one of their own verbally attacking protesters and displaying a view of the world that reinforces the perception the police hate demonstrators and are looking for any excuse to attack them.

I contacted Simon Corbell, ACT Police Minister, to ask if they could do something about the death threat, including oversighting any police investigation. As for the Victoria Police using foul language to attack demonstrators, I hope the more people who know about this the better.

The student demonstrators deserve all the support they can get. I urge readers to let as many people as possible know about this disgraceful attempt to silence dissent.