The relationship between Cardinal George Pell and the alternative Prime Minister, Tony Abbott, should fill us all with alarm, says Barry Everingham.

Readers of the Saturday editions of Melbourne’s crack weekend edition of The Age really owe it’s editor Ben Narastek – and the editor of the paper’s magazine, Good Weekend –  a huge favour.

In the past few weeks, we have been presented with cover stories of Australia’s two most extreme right-wing figures – Sophie Mirabella and George Pell – and we can live in hopes that Narastek will soon share with us a doubled edged trifecta — a 2 of Us look at Andrew Bolt and his guide, mentor, and employer, Gina Rinehart.

It’s not every weekend we get a close look at such characters, whose influence is so terrifying we wonder why we stay in a country where such thought predators ply their hideous wares.

Leaving aside Mirabella, whose use-by date must be fast approaching, let us consider the case of Gina and Bolt — whose joint comeuppance will surely be a mass drop in readership upon Rinehart assuming editorial control of The Age and thereby despoiling the paper’s pages with Bolt’s racist right-wing hyperbole.

But it’s George Pell we got to know last weekend —the George Pell who Tony Abbott holds in a bewitching thrall — and who has described him as:


“…one of the greatest churchmen that Australia has seen”.

I’ll pause for a moment while you force back down your breakfasts.

Now, this writer has often asked just where Abbott is coming from and statements like the one mentioned indicate it has to be direct from cloud cuckoo land.


“as a system of pagan emptiness”.

While Pell is on the trail of denial, it’s is a great shame he wasn’t asked in the interview his views on the Holocaust.

After all, he gave the Jews an enormous serve on Q&A and, in fact, in The Age interview he heaped praise on his friend Pope Benedict XV1 — who readers must surely recall was a member of the infamous Hitler Youth Movement.

It is worth reporting here that when this writer interviewed the famous and revered Nazi hunter Simon Wiesenthal in Vienna in 1984, he scoffed at my suggestion that perhaps many Germans joined the various atrocious Nazi movements out of ignorance or fear.

“They joined because they believed,” he said.

Now, Pell who is a bachelor and wears frocks, capes and silly hats of a bygone and ridiculous era, is very outspoken on the subjects of contraception, abortion and sex outside marriage — matters he, as an unmarried man, would presumably know little about.

Abbott should hang his head in shame heaping praise on such a character.

And it seems that Abbott’s hero isn’t universally loved.

According to one John Buggy, spokesman for Australian Reforming Catholics:


“Pell is rather a nasty man with few redeeming features.”

In the view of Marion Maddox, a theologian and political commentator, the cardinal is one of those rare individuals capable of reshaping an institution in his own image.


"The flavour of Australian Catholicism has changed quite a bit since he became cardinal."

Pell is described as too orthodox, too ambitious and too bullying which is why he has never been officially named as head of the Australian church although  he is the nation’s senior Catholic cleric.

Nor has he ever been elected president of the peak body — The Australian Catholic Bishops Conference.

Why is this so?

Well, according to religious commentator Chris McGillion the answer is quite simple: he is not liked by his fellow bishops! 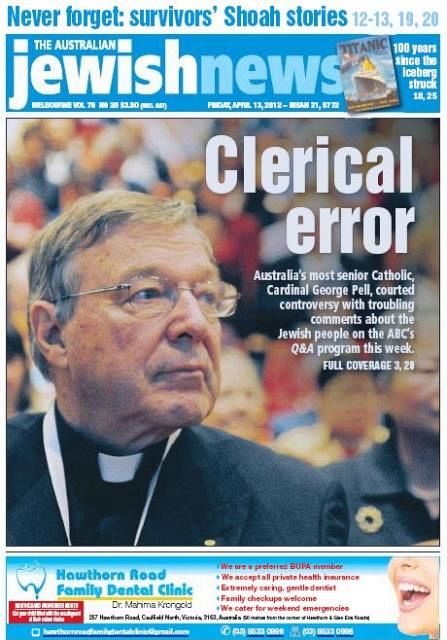 Back to Abbott and the cardinal.


"I rather fear the alliance between him and Abbott, who is in a way the disciple."

Like Abbott, Keneally trained for the priesthood at St Patrick's Seminary, on Sydney's Manly peninsula, before deciding a life of prayer and celibacy wasn't for him. Now the seminary is a hotel school and the novelist is a neighbour of Pell's in an upmarket residential development on the St Patrick's estate:

"I've seen him going for walks in his sandals and black socks," Keneally says. "That's why you need married clergy. [If there were a Mrs Pell] she could say, 'George, you're not going out wearing those dorky black socks with sandals, are you?' "

Pell seems to be on the short list of possible future Popes — though he does play down the notion.

With Pell in Rome and Abbott in The Lodge and others of their ilk in between — God help us all. 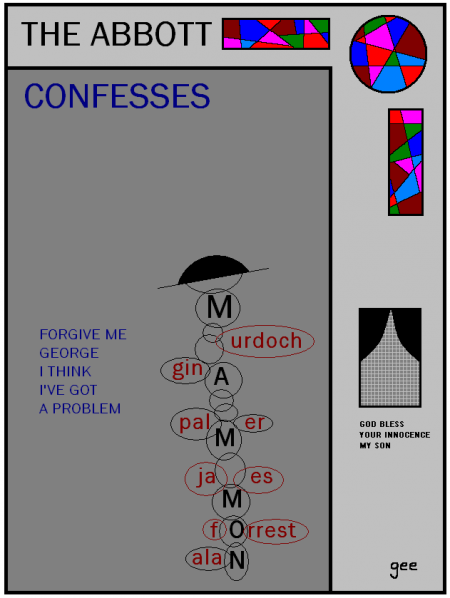