Prime Minister Julia Gillard’s speech at a news conference on Thursday, in which she said she had been the subject of a “sexist smear campaign”, has won the support of female former high-profile politicians from across the political spectrum, reports The Hoopla. 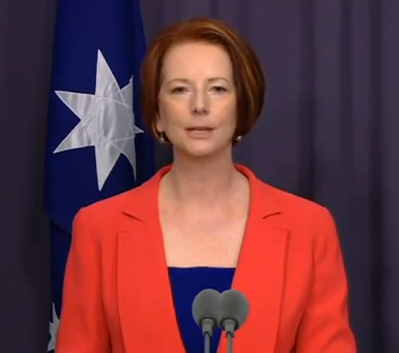 Kerry Chikarovski, Natasha Stott Despoja and Cheryl Kernot told The Hoopla that the PM’s speech was “courageous” and it was time that misogynist behaviour in politics was recognised and denounced.

They also said personal attacks against her made it increasingly difficult for those seeking a role in public life.

Ms Gillard called the news conference to answer questions surrounding her role as an industrial lawyer at Slater & Gordon in the early 1990s when acting for an Australian Workers Union branch run by her then partner, the allegedly corrupt Bruce Wilson.

Ms Gillard rejected claims she had acted unethically or illegally:

To one journalist at the press conference, who asserted that it wasn’t as if the PM was “fresh off the train from Adelaide,” Ms Gillard replied:

The Hoopla contacted a number of women who attained the highest levels of leadership in Australian politics for comment; here’s what they had to say:


“During my time as Leader of the Opposition I fronted more than one difficult press conference.

“What the public don’t understand is the sometimes almost vitriolic attacks by the media can be very personal and over the top.

“People expect politicians to be able to take the pressure but often don’t realise that the intensity of the scrutiny can be almost overwhelming.”


“Of course, there are gender overtones in the criticism and attacks levelled at the Prime Minister.

“I am glad she has put a name and words to the behaviour to which she is so often subjected. A lot of what she has experienced is misogynist and it is time she denounced it as such.

“Who would be a figure in public life these days? Unsubstantiated allegations in the media and free-flowing blog comments do not make public service, in particular politics and political leadership, an attractive choice.


“Julia Gillard’s press conference was courageous and competent; she did not seek the cover of parliamentary privilege but fronted a room containing a number of (predominantly male) journalists who are running a vicious agenda aimed at her “character”; self-important little people convincing themselves they are acting in the “public interest”.  And she answered their questions for well over an hour.

“What’s a legitimate public interest story? Rumours relating to an error of judgement in not ‘opening’ a file on pro bono work for a union 17 years ago; or falling out with some partner colleagues; or falling in love with someone who deceived you?

“Not when the questions have been answered and refuted on several occasions over many years and when the timing and the motives for revisiting them are nakedly political and overlaid with sexism.

“Can we go back and re-examine all the details of Tony Abbott’s pre-marital sex life? Given his strict Catholic values, is that not equally as illuminating about his “character” even 30 years on?

“What’s particularly alarming, I think, is that having said she wouldn’t dignify the comments being made even a PM was eventually hounded by the press gallery herd to respond.

“An unelected, largely unaccountable, often self-righteous bunch of people – many of whose own lives of 20 years ago wouldn’t withstand detailed scrutiny – have more power in setting the agenda of what matters to our nation than those who are elected.

“This IS a serious problem for Australian democracy … and supplements, in the most damaging way the cowardly, abusive, anonymity infecting our social media. Everyone – individuals and societies – needs boundaries.

“It’s time to set some and not be blackmailed by the usual default response of ‘threats to freedom of speech’.”